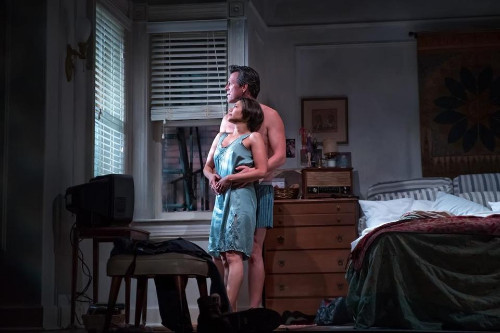 By the light of the silvery moon. Berkshire Theatre Group courtesy photo.

In the dark the actors enter the set designed by John McDermott and slip into the bed that dominates the shabby, disheveled New York studio apartment of Frankie (Angel Desai).

To the radio accompaniment of Bach’s Goldberg Variations we hear the grunts and moans of sex. There are comic overtones as the self-conscious audience begins to snicker.

The first date of co-workers, Johnny (Darren Pettie) a short order cook who quotes Shakespeare, and Frankie, formerly an aspiring actress and now a waitress, has ended in bed.

The evening started with dinner and a movie they have quickly forgotten. That was followed by ice cream and an invitation to her apartment.

Like Greek tragedies that transpire in a single day this two-hander by multiple Tony winner, Terrence McNally, covers twelve hours from evening until dawn. It starts on Saturday, date night, and lingers into Sunday morning.

The action begins at 3 AM. Having had a good romp Frankie tells him that she is “spent” and would like him to leave. The date has gone well and she is open to another.

But he is just getting started and argues that she can sleep in on Sunday. What starts for him as good sex tumbles into aspirations of marriage and kids. Just like that.

Much of the drama/ comedy of two, hour-long acts entails her at times fierce resistance met and matched by his insistence. Early on she threatens to call the cops. But it’s New York, he argues, and will take forever for them to arrive in a domestic dispute. When and if that happens he will exit hastily by the fire-escape with which he threatens to return.

The apartment itself is the third character in this tense play absorbingly directed by Karen Allen. Much is made of the window from which she observes the lives of neighbors. This includes the couple who never speak and a battered woman. She confronted the woman at the supermarket and offered help. About what is the response? Frankie reveals seeing her knocked cold lying on the floor all night.

Eventually we learn that Frankie has been abused. Actually they are both damaged. She is wary of relationships but has lovers. He is facing middle age and seeks a wife and kids.

Over the course of the play with the metaphor of that cramped studio apartment we feel claustrophobic. We are locked in with the man who won’t go home and the woman who is too traumatized to want him to stay.

At times the conflict is too intense and unmitigated to follow. The second act is more legato as they work through obstacles for an eventual closure. Their mutual acceptance of the relationship he seeks is signified by the ritual of brushing their teeth in the morning. She gives him a toothbrush insisting that it has not been used. He states that he won’t ask about the man’s robe in the bathroom.

Love at last prevails as the first light (Shawn E. Boyle) slips obliquely through the window. The transition from moonlight to dawn skillfully conveys the changing mood of the apartment and passage of time. There are plot points about turning lights on or off during sex.

The arc of the play is simplistic and McNally has fleshed it out to the extreme.

Key to the success of the drama is casting. The script conveys that these are two very ordinary, even homely characters. The actors, with more than average looks and attractive bodies, we see a lot of her breasts, don’t really sync with lines they speak.

There is an emphasis in the writing that they are working class with rough edges. That's why the film with Al Pacino and Michelle Pfeiffer flopped. They were too beautiful and Hollywood for the characters they portrayed.

There is so much they don’t know about each other. Start with their last names. Then there are deceptions about their ages. It is blurted out that they are in their forties. He is several years older.

Frankie has given up on love while we come to understand that this is his final, desperate shot at a dream of marriage. There is irony that the man wants this more than she does. Much of the play is about that imbalance.

The sound design by Scott Killian is essential. They are listening to an all night DJ and Johnny calls in a request for the most beautiful possible music. That proves to be Debussy’s Clair de lune which is a factor in both acts. Inspired by making love to the Goldberg Variations he promises to buy her the CD. She states being surprised that Bach was Jewish. Like many great composers he responds. During a passage of tension he says that Wagner’s Dance of the Valkyries has distracted his focus on making love.

The conflict between them is readily familiar. How often after hooking up does one want to be alone? Thanks, call me some time. Maybe we’ll do it again. Did you come?

The sex is raw. When she has put on a robe he insists on seeing her pussy. Reluctantly she complied with her back to the audience. But she draws the line when he demands that she go down on him. It seems he did for her so it is only fair.

There is an uneasy balance between the carnal and romantic. That complicates his pursuit of synergy which she does not comply with.

There are comic alternatives of what to do after sex. The norm is to smoke but she gave that up. If not smoke then eat. He wants a beer and she offers a meatloaf sandwich. But no ketchup he says. There are glasses of milk.

In the second act after more so so sex she  requests then demands that he make a Western omelet. He resists saying that’s real food. Not just like PB&J. Reluctantly he consents. We marvel at his knife work dicing a green pepper.

But, if that’s what it takes he is willing to please her whims.

Much is made of the coincidence of matching up as Frankie and Johnny. That evokes the legendary doomed lovers. As their life stories unfold he jumps on the many coincidences all configured as signifiers of an inevitable relationship. Are those confluences serendipitous or delusional?

As the drama unfolds one wonders if we are watching mud wrestling or romance?

There are indeed tender and bittersweet moments.

As testament to his sincere pursuit of love Johnny is willing to reveal all. She has a check list of questions from prior marriage and children, to drugs, alcohol and crime. His answer is yes to all of the above including two years in the joint for forgery.

The most poignant moment of the evening came when he told of visiting his ex now living is a big, beautiful house by the sea in Maine. Humiliated it represented what he could not provide for the kids. That failure darkens his delusions about their future.

While not a ‘good provider’ they will give love to their children.

“I can’t have any” she states. To which he responds with absurd optimism (this is their first date) “We’ll adopt.”

So it goes for two desperate people breaking down walls of pain and resistance.

Much in this play rings true. There is a lot of Frankie and Johnny in many of us. This is a compelling metaphor for all who have loved, lost, and hoped to love again.