Another New Play for Nikos Stage 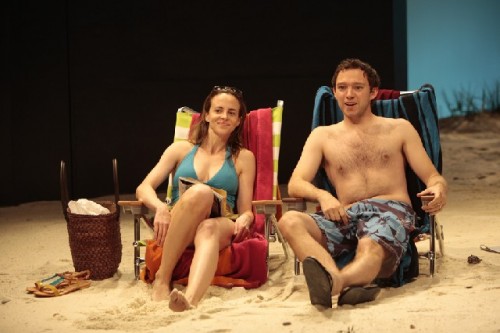 Lizzie (Maria Dizzia) and Matt (Nate Corddry) are sorting through the aftermath of a second miscarriage. WTF photos by T. Charles Erickson. 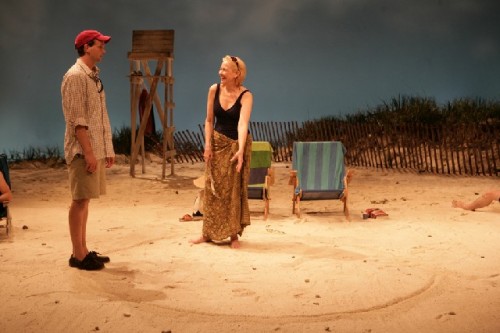 A stand off between Patsy (Harriet Harris) and her son Peter (Dashiell Eaves). 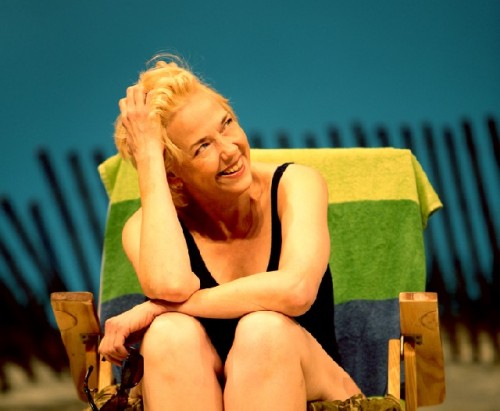 Patsy has her reasons from not handing over the family wedding ring to Peter. 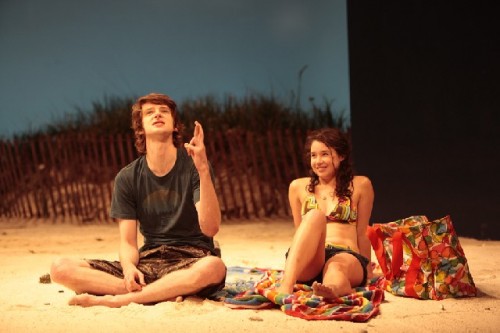 Bo, Will Rogers, and Cara, Sarah Steele want to take their relationsip to another level. 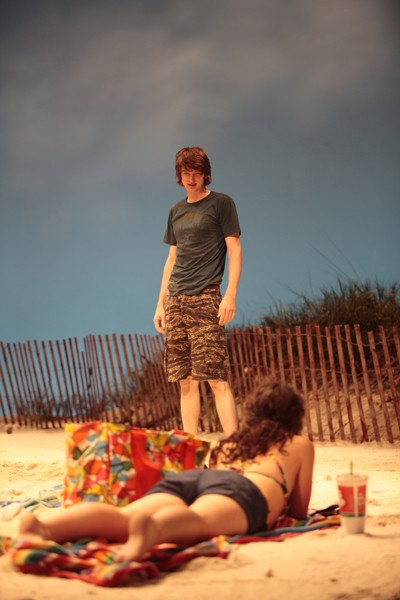 Bo is concerned about being intimate with Cara. 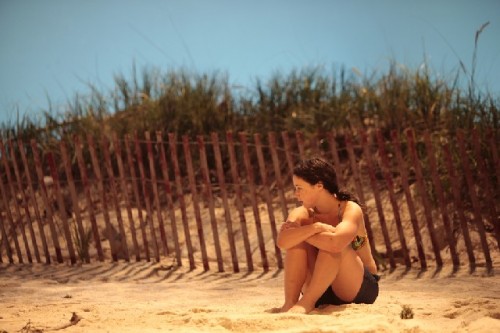 It hurt Cara that apparently Bo has deceived her.

As this new play by Ellen Melaver "Not Waving" on the Nikos Stage of the Williamstown Theatre Festival, through August 17, aptly underscores, life is a beach. It is now August and during the dog days of summer (actually an ongoing Monsoon here in the soggy Berkshires) everyone heads to the seashore for R&R and to slather on the sun screen, hunker down with a trashy novel, and soak up some vitamin D.

That notion of fun in the sun resonated with the audience last night even in the land locked Berkshires where there is a rim of sand but no rip tide at the local swimming hole Windsor Lake better known to locals as Fish Pond. But the simple and functional set of Donald Korins vividly evoked a slice of sea shore that could have been lifted from P' Town to Fire Island.  The stage was covered in sand deep enough for one of the characters, Bo (Will Rogers) to carve out a fantasy skate board course. There is an ominous, unmanned life guard turret. At the rear of the stage is a dune with a wind breaking fence.

The initial response to the set by the veteran WTF audience was, good grief, here we go again. As the setting too vividly recalled last summer's stinkeroo flop, the unfortunate premiere (make that rapid opening and closing) of "Villa America." Getting on track, initially there was inertia and karma to overcome with this new and absorbing drama with a spattering of comedic moments.

We come to the ocean to leave our cares behind. But as the one act play evolved it is evident that even in that tryst with nature at its most sublime most of us tend to drag along our baggage. It evoked the notion that no matter where we go, there we are. That even Mar y Sol often fails to knit up the raveled sleeve of care.

As the play begins we find three couples scrambling to find a prime spot. The rather self absorbed and overbearing, Patsy (Harriet Harris), dashes to beat out the others for the best patch of sand. She wants to be close to the water's edge to catch the cooling breeze. But the son, Peter (Dashiell Eaves) argues, their first of many squabbles, that when the tide comes in they will soon have to move. The second couple Matt (Nate Corddry) and Lizzie (Maria Dizzia) are struggling with  marital issues. The third couple Bo (Will Rogers) and Cara (Sarah Steele) are  kids on the verge of "doing it" for what she assumes to be the first time. Perhaps, as soon as that night when the sun goes down and the beach is deserted.

The plot evolves rather slowly and it takes time to become involved and care for these couples. But the intensity builds nicely as a seemingly benign day at the beach proves to be a cathartic turning point. The mood gradually shifts from casual and frivolous to contentious and intense.

Through all of their initial dialogue we learn that this particular relatively unpopulated expanse of the beach has an ominous history. It was where during the previous summer that a father, who may have been stoned, and his daughter were caught in a rip tide. In attempting to save her, the father was lost. There is talk of what might have been and speculation on the possibility of encountering another rip tide. Had the life guard arrived on time, the man would have been pulled out of the water. While Cara points out that the most basic facts of junior lifesaving training is to not fight a rip tide and swim parallel to it. Although they discuss that more lifeguards have been posted because of that incident, there is none manning the nearby tower.

This metaphor and history is introduced by Melaver to create an external physical threat from nature that resonates with their personal and psychological issues. As the action develops, we anticipate that something catastrophic will occur. Particularly when individuals embroiled in arguments with their partners bolt off and plunge into the ocean. There is a tension as we wonder if they will return.

The dialogue is orchestrated to rotate among the three couples. As we learn a bit about one couple that ends abruptly and is picked up by the next, followed by yet another shift. The intensity builds as more and more issues and conundrums are revealed. Each pair is facing a different issue.

The married couple has recently endured their second miscarriage. Against her wishes for privacy, he has blurted the news to his mother who is invading their lives. This is vividly signified by her intrusive cell phone calls. Even at the beach, Lizzie is not free from her reach. Peter and Patsy discuss his intended engagement. He asks for his grandmother's wedding ring which, until her divorce, she had worn. She refuses creating tension between them. While going through her beach bag, Bo discovers among other items that Cara has brought along a package of condoms. But, in a divisive revelation, he blurts out that he is not also a virgin as he led her to believe.

As the evening unfolded, we found ourselves more and more absorbed with the characters and their issues. The actors were all quite wonderful, and the direction of Carolyn Cantor paced the action nicely. As the senior on the set, and the most experienced actor of the group, Patsy, at times, proved to be overly dominant, particularly when compared to the more tentative performances of the young couple. Sarah Steele was perfectly vulnerable, innocent, and deeply hurt that her intended first sexual partner has jumped the gun. And Roger's Bo was compelling in conveying that it wasn't all that great. Corddry and Dizzia were restrained and effective in revealing the tensions and consequences of a couple attempting to conceive.

Because this play presents three couple sitting on the beach the staging is somewhat static. There is relatively little movement. Now and then a character gets up and does something like take a swim or go off and return with a sandwich. But that results in a wordy play on a single set that takes us through an evening of  head games. Accordingly the play did not feel fully evolved as a theatrical experience.

Most significantly, once again, we are grateful that WTF is producing fresh material. There are clearly risks involved, but artistic director, Nicholas Martin, is maintaining the sense that the theatre is a fresh and living entity. The approach is to have the familiar, more traditional plays on the Main Stage, and to use the intimate Nikos Stage for new work. This balance has proved to be remarkably successful. Even though every production has not necessarily worked, there has been a great sense of energy and anticipation. But with one more production for the Main Stage "Home" by David Storey, next week, this has been a championship season for Martin at the Williamstown Theatre Festival.