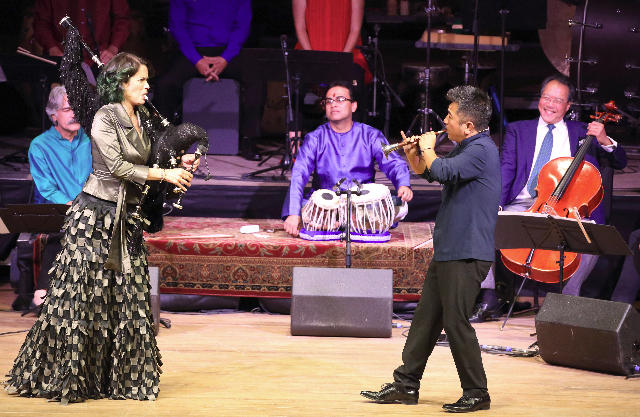 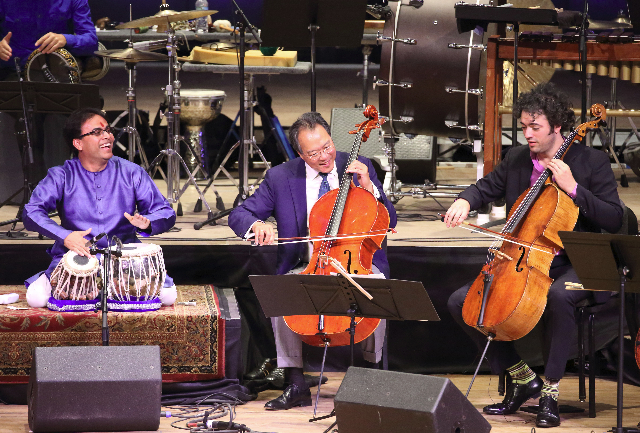 Tabla player Sandeep Das with cellists Yo Yo Ma and Eric Jacobsen. 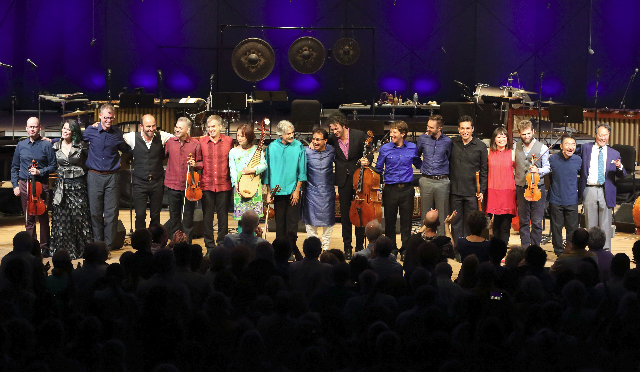 The ensemble takes a bow.

During performances at Tangelwood for the past 18 years we have seen how Silk Road Ensemble, with the visible presence of cellist Yo Yo Ma, has evolved.

In the earliest iteration, accompanied by video, we learned of indigenous musical traditions along the ancient Silk Road. Not only were exotic goods traded from East to West there was also an inevitable cultural exchange.

In a horrific political environment, when immigrants are vilified with threats of exclusion and erecting walls at borders, the music we heard last night, including musicians from Iran and Syria, brought soothing messages of peace and harmony.

Now an ensemble of some fifteen musicians there are visits and cultural exchanges. One segment of the program presented the notion of homes and compositions generated by diverse musicians .

The evening commenced with “Fanfare for Gaita and Suona” featuring the Spanish Cristina Pato and Wu Tong at opposite ends of the stage. They engaged in a call and answer exchange. A native of Galacia, in the extreme north west of Spain, she performed the gaita a unique bagpipe. He evoked a raspy, emotionally enthralling sound from the traditional Chinese reed instrument the metal bell shaped suona.

In the manner of what is know in jazz as a cutting contest each player provided an ever more complex and intricate sequence matched and then trumped by the other.

Both musicians would be prominently featured in the program. She would also play piano while he also played the sheng, a small, reed instrument with a cluster of vertical pipes, as well as sang in Mandarin and English.

There was an eclectic range of instruments on stage both exotic as well as the more familiar western string instruments. Anchored in the middle was Yo Yo Ma with another cellist, Colin Jacobsen next to him.

It was interesting to see and hear Ma not as a dominant presence but as a member of the ensemble responding to the broad range of musical accents and styles.

Through the program we heard music inspired by traditions as diverse as Celtic, Chinese, Japanese, Iranian, Spanish flamenco, Syrian and American jazz.

For most of the program one was wafted along the Silk Road with an eclectic mix of ethnic flavors. Primarily this was exotic, enticing and unfamiliar.

For me the stunning highlight of the evening was an exotic Silk Road treatment of the Duke Ellington theme song “Take the A Train” composed by his brilliant alter ego, Billy Strayhorn.

It started, in an arrangement by Shane Shanahan, with the full ensemble creating a cacophonous mix of sounds and instruments.  Initially, one wondered when the “A Train”  would pull into the Shed.

A huge smile consumed my face. I burst out laughing with unfettered joy when Wu Man on the four stringed pipa, a lute like instrument, with coy understatement began to pluck the familiar refrain.

Then the entire ensemble kicked in and man those cats could swing. Looking down on us there must have been enormous other-worldly grins on the faces of Ellington and Strayhorn. Their enduring music has never been more thrilling.

Sponsored by the State Department Duke’s band toured globally. He always had a keen ear for musical influences and that resulted in his sumptuous “Far East Suite.”

Different members of the ensemble stepped forward to introduce compositions.

The music evolved from visits like Colin Jacobsen’s "Atashgah." It is created around Kayhan Kalhor the Iranian master of a stringed instrument kamancheh. It has a small, square body and is played with a bow. He was banned from performing and teaching in Iran. The musician and his wife now live in California.

During that exchange, accompanied by viola player Nicholas Cords, they visited the ancient fire temple, or atashgah outside the city of  Esfahan. It was erected to worship the ancient Zorastrian religion.

Seated in the center of the ensemble, surrounded by western string instruments, his playing resonated and was richly embellished by the composition.

It is astonishing that musicians so effectively delve into and absorb such diverse traditions.

The Syrian clarinet player, Kinan Azmeh, spoke of the musical jam sessions of village weddings in Syria. Poignantly he described how during the terrible last five years of civil war young people have managed to find each other and fall in love.

When weddings occur the entire village participates in musical jam sessions which are long and loud. To recreate this many young Tanglewood fellows and their teachers filled the stage. There was indeed a joyous sound that reached to the rafters and wafted out to the far edge of the lawn.

Yet again Silk Road was a thrilling highlight of the summer long musical feast of Tanglewood.