Revisiting the Age of Aquarius 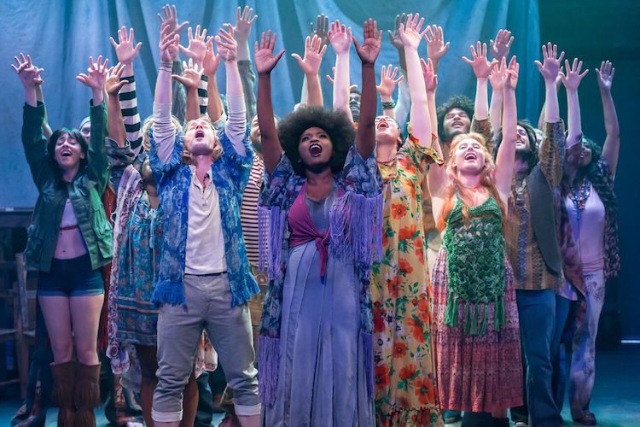 Photos by Brett A. Beiner. 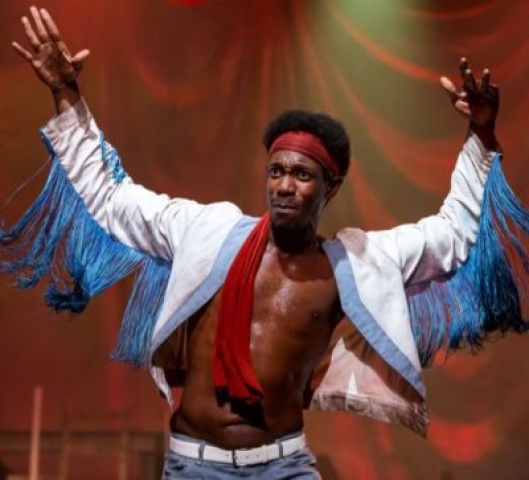 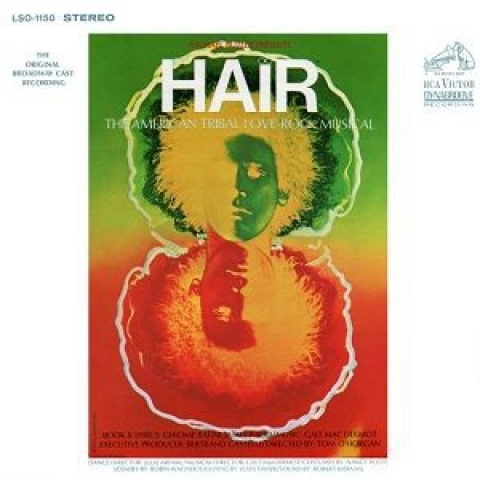 It’s been almost 50 years since I saw Hair: The American Tribal Love-Rock Musical at the old Shubert Theatre in . But I sat in the Mercury Theater Friday night singing along (in my head) with every musical number. That’s the power of song. You never forget music that you live with, as I did with the original cast recording of Hair in 1969-70. I put that album on the turntable over and over again.

The cast of the new Chicago production of Hair, directed by Brenda Didier with musical direction by Eugene Dizon, lives up to my memories in talent and exuberance. And the production creates a whole new experience for today’s generation being introduced to this colorful masterpiece of 1960s song, dance and cultural motifs. The opening night audience was a glorious mix of age, ethnicity, gender expression and costume.

There was a special pleasure seeing Hair in the intimate 290-seat Mercury Theater, where the actors pranced out on a pier into the audience, up and down the aisles, and on a two-level catwalk. The simple stage design by Jeffrey D. Kmiec works perfectly in the Mercury space and Nick Belley’s lighting design enhances the staging. At the end of act one, naked bodies become canvases for lighting and projections, the gorgeous video canvases created by Pete Guither of The Living Canvas.

The music by Galt MacDermot with book and lyrics by Gerome Ragni and James Rado still have the bounce and charm they had 50 years ago. Chris Carter’s choreography makes great use of Kmiec’s multi-level stage design. Costumes are by Robert Kuhn and sound design by Carl Wahlstrom. The six-member band, led by music director Dizon on keyboards, featured bass, guitar, trumpet, woodwinds and percussion.

The play has a thin storyline, but no matter, because it’s the music that counts. Berger (Matthew Keffer) is expelled from high school and Claude Hooper Bukowski (Liam Quealy) receives his draft notice. The world is in disarray with a war in and antiwar parades and draft protests at home. Sheila (Michelle Lauto) reports on the protest rally where they “levitated the Pentagon,” and she saw Jimi Hendrix and Allen Ginsberg before the tear gas hit. The evening culminates in the be-in in the park where the Tribe celebrates and smokes pot and the guys burn their draft cards. Except Claude, who doesn’t burn his draft card.

Hair today seems like a loving throwback to the 1960s, but it’s good to remember how biting it was at the time, with its criticism of the war in , its nose-thumbing at the fuddy duddy mores of the parental generation, as well as nudity, hair(!) and frank language. Hair: The American Tribal Love-Rock Musical was a cultural manifesto at the time and it’s a pleasure to see this fresh, energetic production speaking to a new generation.

The play is full of notable, quotable dialogue and lyrics.

Why doesn’t Claude want to be drafted? “I want to be over here doing the things they’re over there defending.”

And Hud (Evan Tyrone Martin) says, ““The draft is white people sending black people to make war on yellow people to defend the land they stole from the red people.”

And of course, the anthem of the entire show is “Hair,” sung by Claude, Berger and the Tribe.

“Let it fly in the breeze and get caught in the trees,
give a home to the fleas …
I want it long straight curly frizzy snaggy shaggy ratty,matty,
oily greasy fleecy shining gleaming steaming
flaxen waxen knotted polkadotted twisted beaded braided
powdered flowered and confettied
bangled tangled spangled and spaghettied.
Hair hair hair hair hair hair hair hair
Flow it show it long as God can grow it
My hair!”

The original production of Hair opened off-Broadway in October 1967 and moved to Broadway in April 1968, where it ran for 1,750 performances. A feature film adaptation was released in 1979. A 2009 Broadway revival won Tony and Drama Desk awards for best revival of a musical.

Hair runs 2 hours, 15 minutes with one intermission. You can see it through September 17 at the Mercury Theater, Performances are Wednesday-Sunday with two shows on Saturday. Tickets for $30-65 can be bought online or by calling 773-325-1700. Valet parking is available at the door.

The producers recommend the show for age 12 and over. The production contains brief nudity and simulated drug use.