Yo Yo Ma’s World Music Project 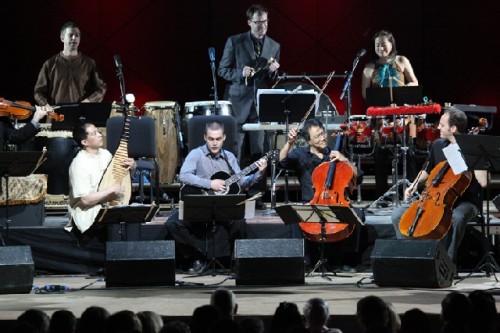 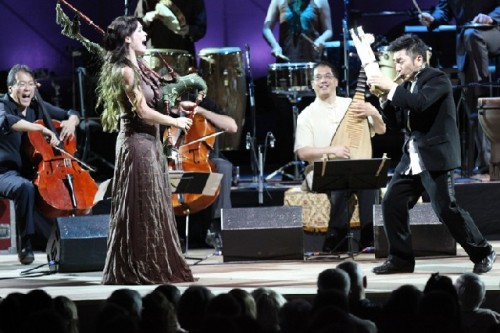 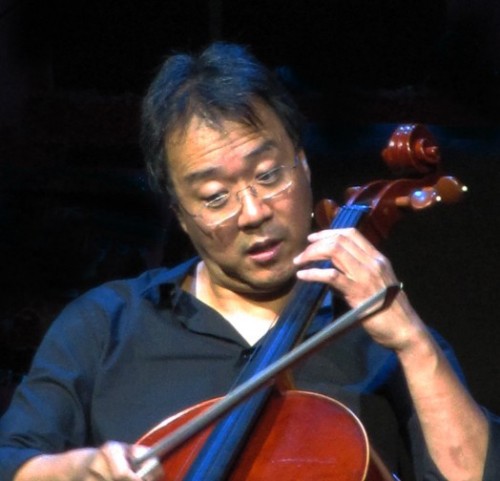 Yo Yo Ma founded the Silk Road Ensemble in 1998. 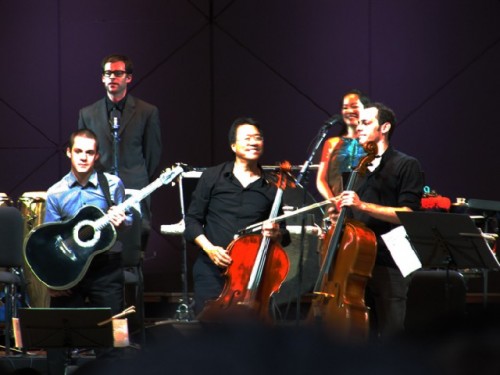 This was the first performance with the Ensemble by guitarist Jon Mendle. 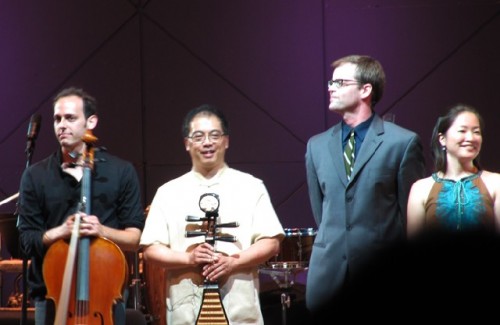 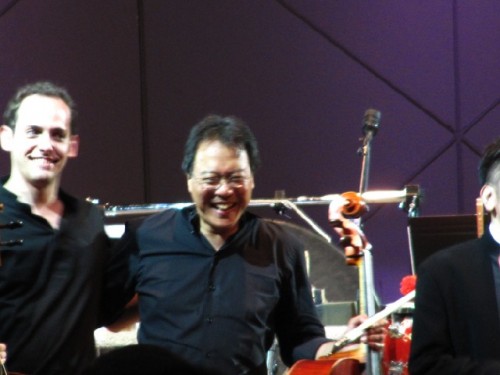 Ma appeared to much enjoy the evening of world music.

This appearance of the Silk Road Ensemble at Tanglewood was quite different from the experience several years ago. The project was founded by the cellist Yo Yo Ma in 1998. The mandate has been to explore and conflate Eastern and Western musical traditions and instruments.

The earlier appearance at Tanglewood featured more of a mix of indigenous musicians. In particular we recall singers with exotic costumes and unique almost screeching vocal projections. As well as percussion using stones. There was a video projection shot in remote villages.

Last night the performance felt quite different. There seemed to be more of a dominance of Western string instruments. With accents of Eastern instruments. While there were Western strings they were played to evoke the rhythms and textures of a mix of Global music.

While the project may have started with a process of travel and discovery of world music the Silk Road Ensemble now appears to have evolved to a different phase. Many of the musicians spoke about the importance of Tanglewood as a home and matrix inspiring and nurturing the creative process. The Ensemble commissions works by a range of composers and arrangers.

As the Indian tabla player Sandeep Das expressed it “I don’t know if there is a Heaven. But if there is a Heaven on earth it is Tanglewood.” In addition to performances in the Shed, particularly in the off season the Ensemble has met to rehearse and develop new music.

Yo Yo Ma was born in Paris, in 1955, to Chinese parents. Today he is regarded as the foremost classical cellist. He is involved in discovering and nurturing a broad spectrum of non Western influences. He brings to this depth and reputation as a musician and musicologist. Through his leadership the Silk Road Ensemble has proved to be a remarkable creative matrix resulting in a richly textured and exotic confluence of elements and musical intonations.

We in the Berkshires, who visit Tanglewood frequently during the dense summer season, as truly blessed to have such a diversity of music. Last night’s program was one of the most anticipated. It was not a disappointment. Yet again Yo Yo Ma revealed to us the vast range of his interests and diversity. Last week, we heard him with the Pops in a tribute to John Williams and in a duet with his good friend James Taylor. There is indeed a remarkable generosity in the frequency and variety of his Tanglewood performances.

The special delight of the performance last night was the sense of discovery. It started with the first piece “Caronte” when Cristina Pato entered playing gaita (Galician bagpipes). She entered from one side of the stage and converged in the middle facing off and trading choruses with Kojiro Umezaki playing a Japanese bamboo flute the shakuhachi. She rocked back and forth with ecstatic energy as the ensemble pulsated with rhythm. The piece was inspired by the Greek myth of Kharon the boatman who conveys souls across the river Acheron in the under world. It was followed by a piece “Ascending Bird” that evokes a flight to the sun and metaphysical transformation.

Ma introduced the cacophonous piece “Wine Madness.” It conveys the ancient legend of a man who rather than give ascent to the marriage of his son to a princess, he has misgivings about the royal family, manages to stay too intoxicated to answer for some 60 days.  The ambassador eventually departs in disgust. Ma advised us not to try this at home. The wonderful music was indeed intoxicating.

Last week Ma with Williams performed as the soloist for his film score “Memoirs of a Geisha.” It conveyed ersatz Asian music. But last night Ma dug much deeper into this tradition. It was interesting to observe how he attacked the instrument. There were many pizzicato passages and he also struck the strings with a percussive attack. We also followed the similar technique of the other Western players. While these were the familiar cellos, violins and violas they produced very different ranges of sound. But we were particularly taken by the sound of  Yang Wei’s pipa, a Chinese lute with a short neck.

The percussion elements were particularly inspiring. There was a piece “Shristi” led by Sandeep Das on tabla. He is a master of the tradition Indian hand drums. It was staggering when one of the percussionists played an extended solo slapping at his body. The audience was astonished by the variety of rhythms and textures he evoked. Do, indeed, try this at home.

The most fascinating instrument was the sheng played by Wu Tong. The Chinese sheng is a mouth-blown free reed instrument consisting essentially of vertical pipes. For an encore Tong sang and played his instrument. As he soloed the musicians strained forward to listen. They seemed as intrigued as we were. Then the ensemble joined in for a dramatic climax.

It was a truly fabulous evening of music. Our ears will never be quite the same.