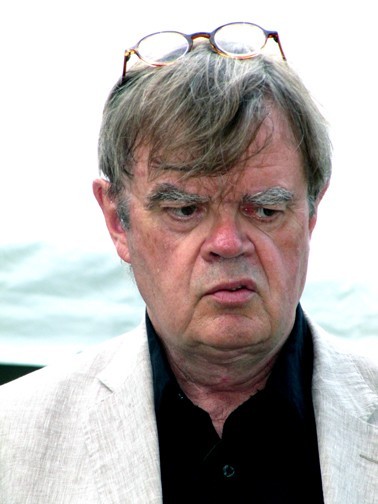 Garrison Keillor nailed it a long time ago â€œWelcome to Lake Wobegon, where all the women are strong, all the men are good-looking, and all the children are above average.â€ Giuliano photo.

These were the pull out quotes in a weekly email blast sent to subscribers of Williamstown Theatre Festival.

The marketing/ PR blast included a single quote from the critic Jeffrey Borak.

Borak, who can be sharp and acerbic viewed this new play more favorably than did I, link to review, or Peter Bergman of Berkshire Bright Focus/ The Advocate. Link to Bergman review.

Our colleague Larry Murray, of Berkshire On Stage, may not have liked the new play by Bess Wohl any more than we did. Link to Murray’s review. He went out of his way, however, to try to probe deeply into the work and to understand the rationale of why it was among the too few new works included in the program of first year artistic director, Jenny Gersten.

As has been the case all season, with just two more productions on tap, this new play at WTF has had a tough reception.

But who listens to critics?

During a recent informal caucus of critics, seated around a table before a show at Berkshire Theatre Festival, there seemed to be agreement that theatres are seeking ways to contain and marginalize reviews and critics.

Maybe we were just being paranoid.

Like when undergraduates told me that they deserved better grades. Then slammed me in evaluations.

Is the tsunami of dumbing down and grade inflation now washing over theatre and critical thinking?

In this new paradigm, Tweets weigh more than critiques.

Particularly when reviews by established print and on line critics are tough, insightful, and well reasoned.

Who cares what a professional who has decades of experiences and a lifetime of study of the craft might think?

Consider that the source of these quotes are unidentified.

Perhaps it might be more honest to say “Perfect,” gushed a WTF intern. “Poignant writing,” stammered a single mother on welfare from North Adams. “Best original play I’ve ever seen.” Hmm. That begs the question of just how many plays that individual has experienced. Is this play being compared to the five others? “A lot of heart…amazing,” said Joe the butcher from Big Y. “Incredible acting,” stated a pensioner from Williamstown.

Indeed the internet has leveled the playing field.

I am because I say I am.

Garrison Keillor nailed it a long time ago “Welcome to Lake Wobegon, where all the women are strong, all the men are good-looking, and all the children are above average.”

Apparently we were onto something and hit a nerve with this editorial. The New York Times has taken on this subject. Their focus is not theatre reviews but the manner in which on line consumer reviews for travel sites, Amazon books and other sources of man on the street, objective opinion have been saturated with five star raves. It is the on line equivalent of standing ovations for shows that are at best average or even mediocre.

Significantly the Times article even ends with the same reference to Garrison Keillor that is quoted above.