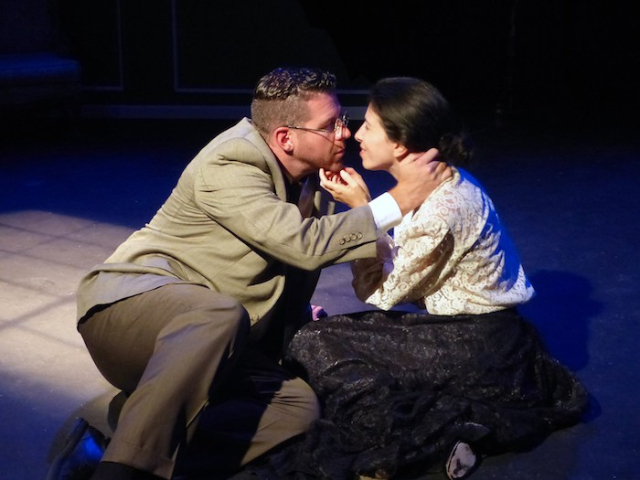 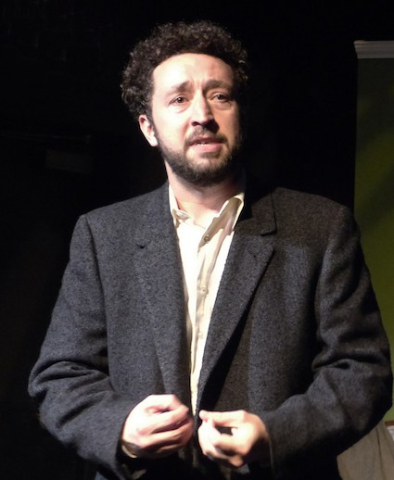 Einstein’s Gift, the compelling new production being staged by Genesis Theatricals, is that most satisfying kind of play. It’s rich with historical detail and scandal and ripe with questions for post-theater conversations.

Under Elayne LeTraunik’s direction, the fact-based story of two scientists moves from their early days to the Great War and its aftermath in Germany: the rise of Hitler and national socialism.

Despite its title, Vern Thiessen’s play is the story of Fritz Haber (Chris Saunders), a German Jewish chemist who made important discoveries, one of which won him the 1918 Nobel Prize in Chemistry. That discovery—which synthesized ammonia for use in fertilizers and explosives — also became the chlorine gas that killed thousands of soldiers on both sides in World War I. In particular, it was the poison gas used in the 1915 Battle of Ypres, with 100,000 casualties. (Haber helped develop the gas masks the soldiers wore to protect themselves from the gas, which did horrible damage to lungs and tissue.)

Haber later developed the cyanide gas known as Zyklon A (and later Zyklon B), intended as an insecticide to improve harvests and grain storage, but it was also used during the Holocaust in the death camp gas chambers.

The use of poison gas is dramatized by the gruesome death of a young soldier in Einstein’s Gift. Thiessen highlights a quote from a poem by soldier-poet Wilfred Owen in his script.

Gas! GAS! Quick, boys! An ecstasy of fumbling,
Fitting the clumsy helmets just in time;
But someone still was yelling out and stumbling,
And flound’ring like a man in fire or lime. . .
Dim, through the misty panes and thick green light,
As under a green sea, I saw him drowning.
In all my dreams, before my helpless sight,
He plunges at me, guttering, choking, drowning.

Albert Einstein, played by Guy Wicke, appears as a narrator/observer as well as Haber’s colleague and conscience. The two men take different views of the role of science. Einstein believes that “Imagination is more important than knowledge,” while the pragmatic Haber thinks it essential that his chemical discoveries have practical applications.

HABER Tell me, Einstein: [your] new theories on light, what purpose will they serve?

HABER What will they do?

EINSTEIN They are ideas, Haber. They don’t do anything on their own.

HABER You have no interest in the outcome?

EINSTEIN Interest, yes, but the practicalities are out of my control. The role of the scientist is to think, not to tell the future.

HABER That’s not enough. It is not enough to sit in our labs, day in, day out, and stew and experiment and think and dream. It is not enough. We must also apply. Your theories may change the way people see things, but they will do little for, say, the starving farmer who can’t fertilize his field.

. . . . EINSTEIN I am as concerned for the farmer as you are, Herr Haber, I like to eat. My study on light may well affect the farmer, or the businessmen or the artist. It may. But is not in my realm

Haber renounces his Jewish heritage and is baptized Christian to improve his career prospects in Germany. (He tells Einstein, “I can assure you that I have no more interest in the Christian faith than I do in any other. But in this country, a baptism certificate is one more piece of red tape necessary in acquiring a full-time professorship.”)

Haber is a military officer during World War I and holds prestigious academic positions in the 1920s. We see the bombastic Haber’s softer side in his relationship with his first wife, Clara (charmingly played by Vered Hankin) and his love affair and marriage with his second wife, Lotta (Becky Lang). Clara, the first woman to earn a doctorate in chemistry in Germany, also was a pacifist and women’s rights activist. She forsakes her own career to further her husband’s and is distraught to see the form his discoveries take.

After the rise of the Nazi party, Haber, who heads a university research institute, is forced to fire his “non-Aryan” employees and also loses his own position, because of his Jewish heritage.

A broken man, Haber is sick and dying. Invited to teach in Palestine, he stops in Basel, where Einstein visits him.

Einstein, who says he considers himself “a deeply religious non-believer,” gives a present to Haber to welcome him to his reclaimed Jewish identity.

What are the differences between Einstein and Haber? Einstein sums them up at the end, after giving Haber his gift.

“People like me, we keep a safe distance from life, we live inside ourselves, we deserve nothing. But you. You have struggled with the world. You have earned it.”

Haber says to him, “And one day they will take that useless idea of yours and do something with it that you never thought of, whether you like it or not.”

And indeed, at the very end, Einstein sorrowfully acknowledges that his discovery of relativity has been used to create the most destructive weapon the world had ever seen.

The four principals all provide fine performances in Einstein’s Gift. Saunders is a pompous Haber, until life crumbles around him. Wicke as Einstein is thoughtful, self-effacing and perhaps a bit too soft-spoken. Both Hankin and Lang are excellent as the women in Haber’s life. Nicholas Hodge is also fine as Haber’s research assistant, Otto.

Einstein’s Gift is performed on a simple set, furnished as an office on one side and a drawing room on the other. Harrison Ornelas’ set design is enhanced by Jeremy Hollis’ lighting and J.J. Porterfield’s atmospheric sound design. Some opening-night sound problems–some performers speaking too loudly and others too softly–need to be evened out by the director.

Canadian playwright Thiessen has won many awards, including the Governor General’s Literary Award. Some of his other works are Blowfish, Lenin’s Embalmers, Vimy, Bird Brain and an adaptation of Somerset Maugham’s novel, Of Human Bondage. He grew up in Winnipeg, lived and worked for years in Edmonton and now lives in New York City. Thiessen is currently at work on several commissions for the Epic Theatre Ensemble and Ensemble Studio Theatre (New York), Touchstone Theatre/Patrick Street (Vancouver) and Soulpepper Theatre Company (Toronto).

Einstein’s Gift by Genesis Theatrical Productions runs just under two hours with an intermission. It continues in Studio One at the Athenaeum Theatre through August 28 with performances Thursday-Sunday. Tickets for $30 with some discounts available can be bought online or by calling 773-935-6875.