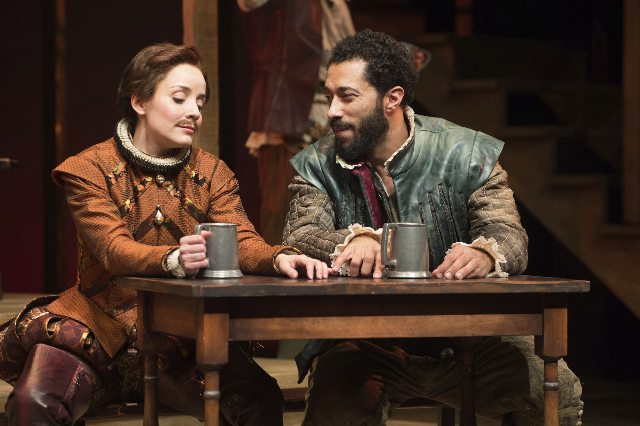 Jamie Ann Romero as Viola (disguised as Thomas Kent), William DeMeritt as Will. All photos by Jenny Graham. 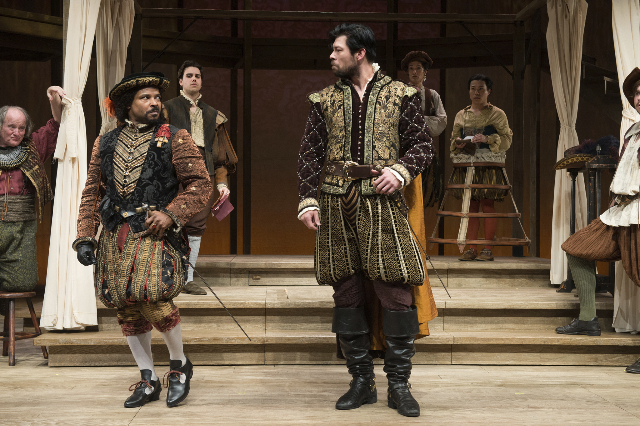 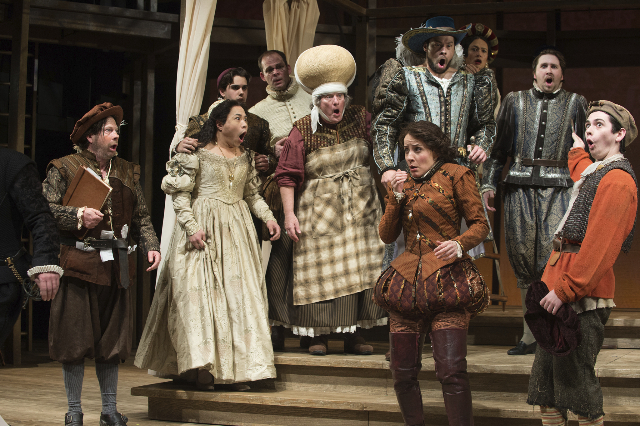 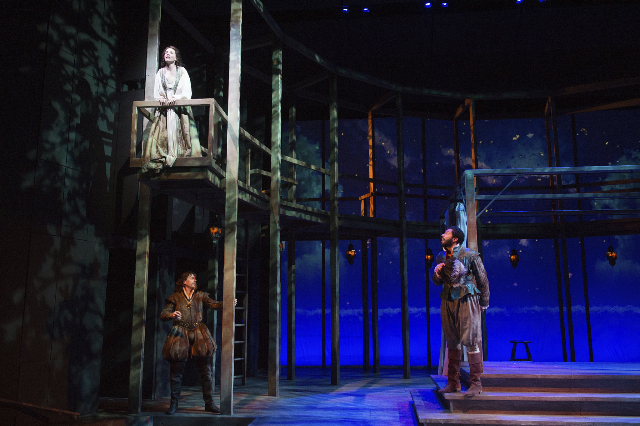 Jamie Ann Romero (above) as Viola, Ted Deasy as Kit Marlow (below), William DeMeritt as Will.

“But soft, what light through yonder window breaks? It is the east, and Ethel is the sun.” Ethel? Who the hell is Ethel? Given the prodigious output of William Shakespeare, it is hard to imagine him suffering writer’s block in composing a new comedy Romeo and Ethel, the Pirate’s Daughter. This is the opening conceit of Shakespeare in Love, a fanciful fiction about the Bard, wherein his friend, Christopher (Kit) Marlow, and his muse, Viola, influence him to pen a tragedy instead and name the heroine Juliet. The play resulting from these minor changes has had legs.

Shakespeare-centric theater companies like Oregon Shakes must provide a balance of Elizabethan era works with other offerings to attract sufficient audiences. Sometimes, a hybrid, and especially a sophisticated comedy that is about Shakespeare or one of his plays can be well received. So it is with Shakespeare in Love, the U.S. premiere of the stage version of the highly successful film.

Christopher Liam Moore directs a beautifully mounted staging. A versatile set fringed with metal framing has at its center a rotating platform draped with pale-colored muslin-looking curtains. The platform serves as everything from a performing stage to a bedding site. Of course, one would expect this company to have a surfeit of period costumes, and they are stunning and very much in evidence.

Shakespeare in Love is predominately a comedy but with romantic elements. It is not surprising that the playwright would be smitten by his muse, and Shakespeare is taken with Viola. However, the central plot line concerns his trying to complete what was supposed to be a comedy with myriad of distractions. Another complication is that there are two competing companies that expect exclusivity to perform it.

Although sophisticated (as well as puerile) humor propels the story, women’s rights is another thread of importance to the plot. Through the oft-used Shakespearean device of mistaken or misrepresented identity, Viola insinuates herself into being cast in the new work as Romeo. This will ultimately prove problematic, because in 16th Century England, acting by women was strictly illegal, despite the fact that they might seem inherently more qualified for certain parts than men. Another irony is that Queen Elizabeth had been on the throne for 40 years by the time of the play. And as she poignantly observes, she knows well what it is like to compete as a woman in a man’s world.

The other women’s rights issue concerns the dependence of women and their absence of station. As the daughter of a wealthy merchant, Viola represents a desirable match for a titled noble having stature but lacking financial wherewithal. Young women were typically treated as chattel in those days. Without the ability to live and work independently, they had little choice but to follow the marital wishes of their fathers. Viola faces such a conundrum.

But the driving theme about Kit Marlow feeding Shakespeare manuscript ideas relates to one of the ongoing controversies about the authorship of much of the canon. For those not familiar, considerable research findings suggest that some of the output attributed to Shakespeare was ghostwritten by or in collaboration with others. Indeed, in 2016, the Oxford University Press accepted evidence to be conclusive and declared Marlow to be co-author of all three Henry VI plays. The attribution is indicated the current edition of New Oxford Shakespeare.

Along with fine production values, the acting in Shakespeare in Love is first rate. William DeMeritt and Jamie Ann Romero are Will and Viola. Both exude charm and give winning performances, but to some extent, they are the straight men to other raucous characters. K.T. Vogt is a prototypical plump and florid Shakespearean nurse, intrusive and shrieking. James Ryen and Kevin Kenerly are Ned Alleyn and Burbage respectively – actual famed actors from the era. Each captures the thespian’s over-the-top arrogance and flamboyance with great panache.

Shakespeare in Love adapted by Lee Hall from the screenplay by Marc Norman and Tom Stoppard is produced by Oregon Shakespeare Festival and plays on its stage in Ashland, OR through October 29, 2017