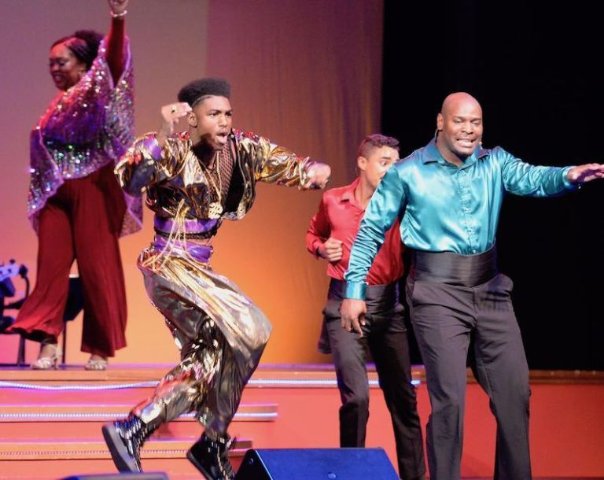 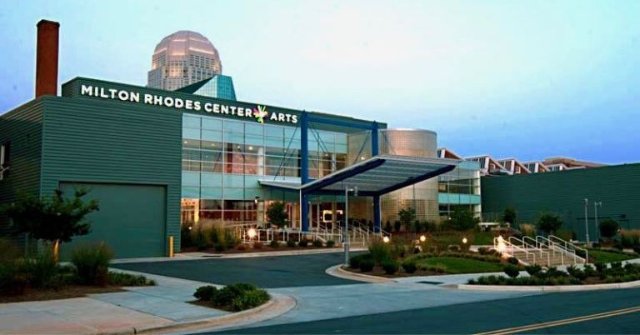 The Milton Rhodes Center for the Arts. Image courtesy Arts Council of Winston-Salem and Forsyth County. 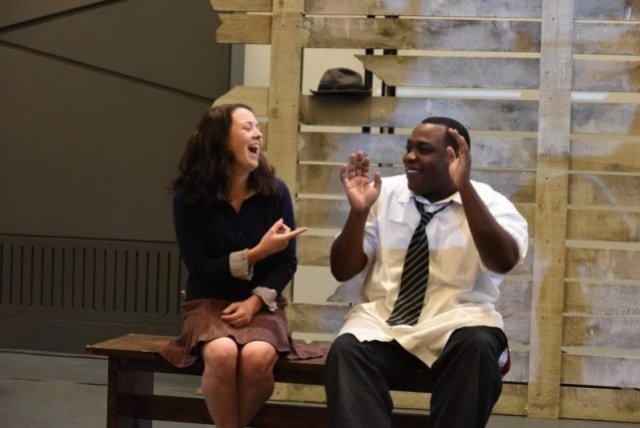 A moving conversation between Anne (Frank) and Emmett (Till), somewhere in memory. A rousing concert tribute to soul music. A production of a Pulitzer Prize drama by Lynn Nottage. Two solo shows about eminent black historical figures. Those were the productions that I saw last week during the Winston-Salem, NC National Black Theatre Festival.

The American Theatre Critics Association (ATCA) held its annual meeting there in conjunction with the festival’s biennial staging. The city of 245,000 was alive with theatergoers from all over the country attending plays and fringe productions plus cultural tours, readings, solo performances, a film fest, poetry jam, and a colloquium on the future of black performing arts. Some of the plays and events were held at two hotels in central Winston-Salem, but many of the 30 theatrical productions were on stages all over town—in schools and universities, churches, and arts centers. (A most impressive Milton Rhodes Center for the Arts, headquarters of the Arts Council of Winston-Salem, houses three theaters.)

The festival is produced every two years in Winston by the North Carolina Black Repertory Company, a 40-year-old theater company founded in 1979 by the late Larry Leon Hamlin, whose memory we observed in a moment of silence before each performance. (He died in 2007 at age 58.) His widow, Sylvia Sprinkle-Hamlin, is executive producer of the NBTF and chair of the board of directors of the theater company.

One of our ATCA programs was a session on the “Living History of the North Carolina Black Repertory Company and the National Black Theatre Festival,” moderated by Lynn Felder, a local arts journalist and ATCA member. The lively panel was made up of Sprinkle-Hamlin and four NCBRC staff members.

The festival attracts thousands of theatergoers from all over the country, who attend more than 100 performances, many of which sell out in advance. I talked to my fellow theatergoers as we waited to enter a theater or during intermissions. Sometimes I had a chance to visit with fellow bus riders (free service between venues provided by the festival). Many of those I chatted with were attending the festival for the fourth, fifth or sixth time. The six-day festival is a vacation destination and a source of great pride for black theatergoers. Over the years, black arts and theater celebrities who have provided professional and financial support have included August Wilson, Harry Belafonte, Sidney Poitier, Pearl Cleage, Savion Glover and Leslie Uggams,

Here are mini reviews of the plays that I saw during the festival.

My favorite production was Anne and Emmett by Janet Langhart Cohen, directed by Thomas W. Jones II, staged at the University of North Carolina School for the Arts. The play introduces Anne Frank (played by Hannah Church) and her story of the Holocaust in scenes alternating with the story of Emmett Till (Enoch King), the Chicago boy murdered in Mississippi. We learn about their earlier years, meet Anne’s father Otto (Roger Grunwald) and Emmett’s mother, Mamie Till Mobley (Roz White). Eventually, their two stories merge somewhere in memory and the young people converse about their histories, dreams and deaths.

Anne and Emmett is staged in a contemporary way with stirring sound design and projections that aid in the storytelling. I do have some quibbles with the script, which is quite basic in some ways (such as when Anne and Emmett try to top each other by naming famous Jewish and black achievers). It may be that the best audience for the play would be a middle or high school group not familiar with the history. (The play has been staged many times for school audiences.) Despite that caveat, Anne and Emmett is a stirring and interesting story.

This is a rousing and toe-tapping concert-as-play with a thin story line comparing modern music to the soul music and talents of the 1950s and ‘60s. We sat in the grand auditorium of the Richard J. Reynolds High School, built in 1923, with beautiful Moravian-style carved wooden ornament surrounding the stage. A five-man band was on stage, behind the seven musical performers. The Soul Men are five color-coordinated male dancers of varied sizes and ages. Derric is a young performer, angling for his first album and committed to hip-hop and rap…until he isn’t, because, of course, the Soul Men convince him of the beauty of the earlier music. Ariel, the sole female performer, is a sizzling dancing and singing talent.

The colorful and snazzy costumes and slick choreography add to the quality of the production, created and directed by Nate Jacobs. We did wish for better sound engineering in setting the balance of band against vocals. Many of the lyrics were hard to understand, even for songs that were very familiar. I love Sam Cooke and “You Send Me” was almost over before I realized it was being sung. That was a real disappointment in an otherwise excellent production.

First by Faith was paired with Dinner with Booker T.and staged in the upstairs theater at the Milton Rhodes Center. While both were about interesting historical characters, the Mary Mcleod Bethune production is far superior as theater. Richarda Abrams, playwright and actor, fully becomes her character, an educator and civil rights activist, from child, to teen, young woman and older woman. Each transition is made with simple costume or accessory changes and adjustments in posture, movement and voice. Dina Vovsi’s direction guides Abram’s strong acting.

Bethune was born in South Carolina in 1875 to parents who were former slaves. Her mother, who bore 17 children, saved to buy land from her former owner and she and her family raised cotton. Mary was at work in the fields by age 5. She attended a one-room black mission school and later benefited from a movement to educate African Americans after the Civil War. She attended a seminary on scholarship and then attended what is now Moody Bible Institute in Chicago. She wanted to be a missionary but was told black missionaries were not needed, so she decided she would take it as her own mission to educate black girls. She formed the Educational and Industrial Training School for Negro Girls in Daytona, Fla. Later she had a distinguished public life.

Occasionally Abrams, a skilled storyteller, would talk directly to her audience, commenting on public issues of the past and present. Her audience was very responsive.

It was a simple White House dinner. On October 16, 1901, the new President Theodore Roosevelt invited his adviser, Booker T. Washington, to the White House to dine with the Roosevelt family. It wasn’t unusual. Several earlier presidents had invited black leaders such as Frederick Douglass and Sojourner Truth, to the White House and Roosevelt himself had done the same while governor of New York. But this dinner brought a storm of vicious criticism, especially by Southern politicians and newspapers. The White House issued statements at first denying the dinner took place and later saying that the Roosevelt women had not been present. (An early version of fake news.)

The dinner is the centerpiece of this one-act play, written and performed by Darryl Reuben Hall, who also plays many other characters during the course of the 50-minute production. Hall tells Washington’s story from childhood through his distinguished public life. He vigorously opposed the disenfranchisement of blacks and the Jim Crow laws that were passed after Reconstruction. Born in 1856 Virginia, he was the last generation born into slavery. He worked his way through college and became the first president of the new Tuskegee Institute in Alabama.

Hall is earnest in his characterization of Washington, but his style and many of his transitions are erratic. After the discussion on the negative reaction to his dinner at the White House, Hall comes out made up in blackface, performing as a minstrel show dancer and sometimes covering his face with a newspaper carrying words from the vicious commentary. While realizing that we might have been missing the cultural significance of this, my colleagues and I were puzzled by the meaning of this chilling action.

Lynn Nottage’s Pulitzer Prize winning drama had its world premiere at Goodman Theatre in 2008. I regret that I didn’t see it then or a later Eclipse Theatre production. So I was eager to see Ruined, which was staged in Dillard Auditorium at Winston-Salem State University. It was a university production, directed by a theater professor, and considered part of the NBTF fringe series. The play is a powerful story of brutality toward women during wartime in the Democratic Republic of the Congo in the year 2000. Because it’s a student production, I won’t review it. That’s a standard policy for most theater critics.

The next National Black Theatre Festival will be in midsummer 2021. If you’d like to explore a charming midsize southern city and have the opportunity to see lots of plays and other arts events with an African American focus, I recommend you consider a visit to Winston-Salem in two years,