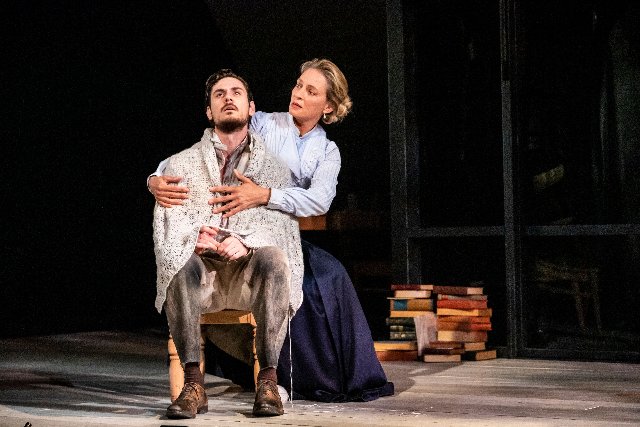 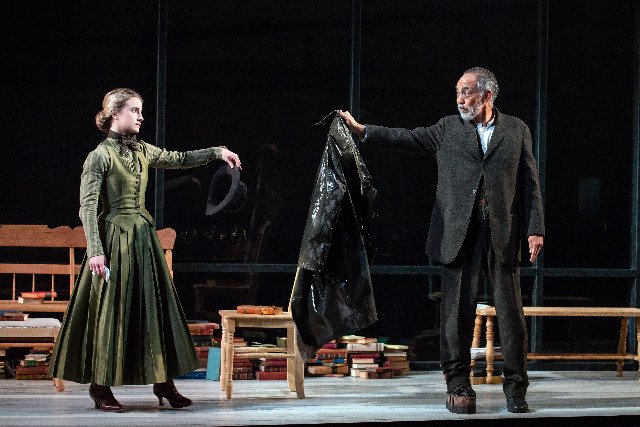 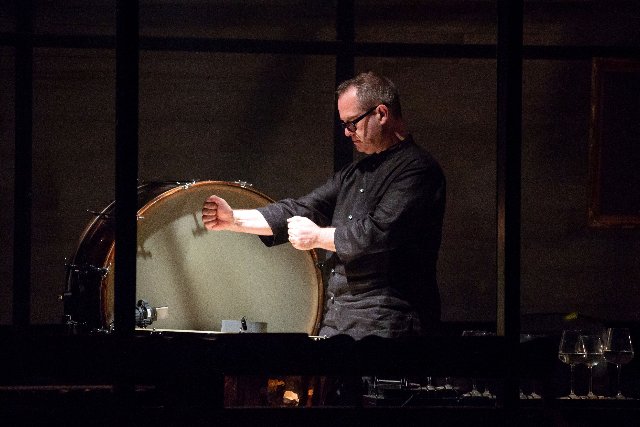 The composer, David Coulter, was also an actor.

Another diva season wraps on the main stage of Williamstown Theatre Festival through August 18. A new translation of Henrick Ibsen’s Ghosts by Paul Walsh features Uma Thurman as Mrs. Helene Alving. In 2018 there were mixed reviews for her Broadway debut in Parisian Woman. It was a Beau Willimon rewrite of an 1888 play by Henri Becque.

A drama in three acts Ghosts was published in 1881 in Norwegian as Gengangere and performed the following year. Its theme of congenital syphilis outraged critics and audiences. The play was emblematic of Ibsen’s approach to realism and social justice. It followed A Doll's House  a three-act play which premiered at the Royal Theatre in Copenhagen, Denmark, on 21 December 1879.

The character of Mrs. Helene Alving is challenging and complex. She is less strident, courageous and revolutionary than Nora Helmer who walked out on a typically domineering husband Thorvald. That play famously ends with a slammed door.

In Ghosts we have a similar theme of how women are subjected to the whim of chauvinistic husbands. Nora had a confidant in the terminally ill Dr. Rank. Mrs. Alving has a spiritual and financial advisor in Pastor Manders (Bernard White).

He is an uptight moral prig who gives her catastrophic advice in the name of God. Yet, a widow, she desires him. Fending off a gentle advance to be more than friends he retorts with moral outrage that I have never thought of you as other than a married woman. That the husband in question, a diseased, alcoholic, womanizer is dead seems not to sway the pastor.

In her willingness to conform and be subservient to male domination Ibsen pulled back from the headstrong feminism of Nora. Given the turmoil that greeted Doll’s House, the more interesting play, Ibsen went in another direction. He backed off feminism and explored the taboo theme of sexually transmitted disease.

It’s not hard to imagine why that didn’t play well in 19th century Norway or Europe for that matter. In this updated revival, with adamantly American vernacular language, STD hardly induces a flinch from the audience. That equates to a somewhat enervating evening particularly through the efforts of the director, Carey Perloff, to contemporize the play as a vehicle for the generally understated performance of Thurman.

Perloff writes in WTF PR that “Artistic Director Mandy Greenfield programmed a season full of complicated female characters. From Lena Younger in A Raisin in the Sun, to Nancy French in Grand Horizons, to the upcoming Gail in Before the Meeting, these are contemporary women doing their best in a world with no easy answers. Mrs. Alving reminds us that these women and the conflicts they face span centuries. In a summer rife with world premiere plays, I'm proud to lead a revival of one of Ibsen's lesser-known works and to illuminate the complexity of one of his greatest female protagonists.”

As directed by Perloff there are different, and not particularly cohesive, thermostat setting for the actors. Tom Pecinka plays Oswald Alving with the heat of sanguine youth. The bashed up proletariat Jakob Engstrand clumps about in a heavy footed caricature by Thom Sesma. The spurts that range from subservience to passion of his “daughter” Regina Engstrand, as performed by Catherine Combs, have flickers that match the heat of Pecinka.

The wavering and opportunistic man of God, Pastor Manders, runs hot and cold. Compared to which Thurman’s Mrs. Alving is mostly tepid.

Arguably, the restraint she exudes may be reflective of the repression of a 19th century woman from rural Norway. She wavers between cold and controlling. There are hints of motivation. The back-story is that she married, not for love, but rather for wealth and social position. Not that the latter seems to matter much in rural Norway. By contrast Nora was sophisticated and enjoyed urban social status.

But Mrs. Alving has secrets. There are all those Ghosts and skeletons in the closet. In a reference to Lady Macbeth she is seen knitting up the raveled sleeve of care. It’s what she wraps around Oswald during the fatal reveal before the tragic meltdown at the end of the play.

It is never easy to experience Ibsen. There is that Dionysian, Northern European, expressionist, dystopia to contend with.

Oswald, an aspiring artist, has returned from Paris, the City of Light, to Norway and Ibsen’s gloom and doom. It is raining during the play although we get an indirect sense of that. Complaining of how dark the house is Regina is ordered to fetch lamps. That sets up how Pastor Manders burns down the orphanage which he was asked to bless and dedicate.

Typically, WTF has installed an over the top set designed by Dane Laffrey who also created the period costumes. The interior is bleak and austere with minimalist, non descript furnishings. There is a dining area as well as living room. A door to the rear leads into glassed in back rooms. In the lighting design of James F. Ingalls the musician, David Coulter, is occasionally highlighted. Oddly he becomes an ersatz character and awkwardly joins the actors for a curtail call. The electronic music added a wiggy, noir, cinematic ambiance to the drama.

Hovering over the Alving home, in a preposterous, oppressive manner is an enormous, triangular roof. We don’t know what to make of it other than a rather arch design conceit. It perhaps alludes to a thatched roof but is so coarse in texture that it more resembles a beach shack in Tahiti. So much so that Regina might be serving Scorpion Bowls and Mai Tai’s instead of champagne.

While the ghosts, secrets and skeletons are revealed at the end of the play they don’t make sense. If Oswald suffers from inherited disease why did it not infect his mother? Or, as it turns out his step sister Regina. She was born to a knocked up servant. It seems that Jakob Engstrand made an honest woman of her with modest compensation.

With these “savings” he aspires to open a hostel for ambient sailors. Regina will come home to help and perhaps hook up with a ship’s captain. She is repulsed at the thought of returning to his home. At a young age she left to work for Mrs. Alving. With resentment she learns that her employer is in fact her step mother. It gets confusing.

Engstrand is willing to take another fall, for decent compensation, on behalf of the Pastor who accidentally torched the barn.

Is it possible that Oswald acquired the Spanish disease in Paris? He was, after all, an artist. If so, like father like son. There is a graphic prognosis of his pending horrific demise. Not a word is said of the ghastly manner in which his father died. The assumption is that the bugger got what he deserved.

Regina, good for her, will have none of this. Oswald led her on about taking her away to Paris. She has been learning French to no avail. In the country she has few prospects. But there is no way she is going to marry her step brother and nurse him to an early grave.

All of which entails Ibsen being Ibsen.