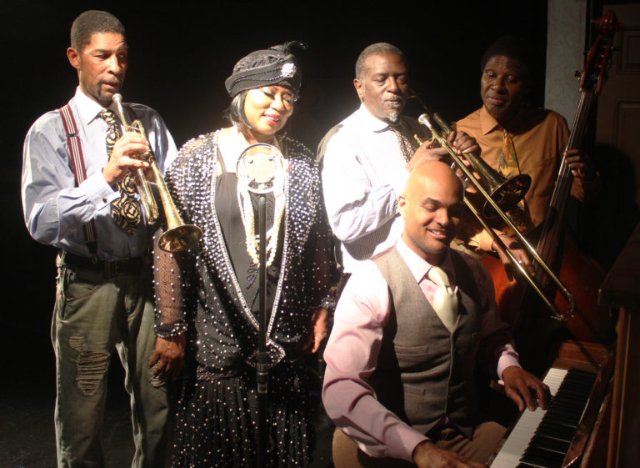 Divas often keep their followers waiting, and Ma Rainey is no exception. Self-styled as the “Mother of the Blues,” she claims to be more important to the idiom than Bessie Smith. Late for a recording session, her tardiness allows her four band members the opportunity to interact with one another, which they do in a mostly fractious manner. They reveal a great deal about their individual approaches to their profession, but beyond that, the deeper issue of what it means to be a black man and the differing philosophies of how to get by in a white world where they are subject to discrimination in many forms.

Set in 1927 Chicago, Ma Rainey’s Black Bottom is the only play in August Wilson’s great ten-play, ten-decade “Pittsburgh Cycle,” of the black experience in America that takes place outside his home town. Although the black bottom in the title refers to the flapper dance of the period, it seems intended as a double entendre with sexual innuendo. Both connotations are relevant to one of the important verbal clashes among the band members.

Piano player, Toledo, stands apart from the other musicians as a reader, a deep thinker, and an eloquent speaker. The other men accept the subservience of their race and are either immersed in hedonism to make the best of a bad hand or escape into religion in the expectation of a better world on the other side. Toledo argues that what holds the black race down is its focus on immediate gratification and the afterlife rather than trying to improve itself through learning and applying its lessons.

Meanwhile, the white world abuses the black. The moral corruption of the white-run music recording business is very much in play. In real life, during its first decades, the industry was notorious for exploiting black performers of the highest order who lacked business knowledge and leverage to negotiate equitable deals. Promoters were adept in remunerating black headliners to the extent that they would stand above the rest of their community financially, but in no way earn what they were worth.

Session players and song writers were less fortunate. Wilson explores these relationships through the white characters of record producer Sturdyvant, who offers to buy songs from trumpeter Levee at a paltry $5 a pop, and Ma Rainey’s manager, Irvin, who won’t even spring 5 cents to buy Ma a Coke. Ma notes that she’s not appreciated by her white handlers except for the revenue she produces, and the several other characters deliver vignettes that reinforce the lack of respect that even accomplished black people receive from whites.

The playwright knows these characters. They are full-fleshed and authentic, and the situations are equally realistic. Each person is concerned with personal needs. Ma Rainey is self-centered and demands adulation. Levee is so obsessed with shoes that he spends a week’s earnings on a pair. Slow Drag wants to record as quickly as possible so that he can have a good time. And band leader Cutler just wants to rehearse and get everyone on the same page.

The play is highly regarded and was nominated for and won numerous awards from its Broadway run starting in 1984. Its insights into black psyche and the nature of the recording industry are profound. And this comes from a play that takes place in a single afternoon.

Multi Ethnic Theater, under the leadership of founder Lewis Campbell, has pursued a laudable path. Among other accomplishments, this is the seventh of Wilson’s 10 cycle plays that it has produced. It is visually satisfying with set design of the studio and the rehearsal room by Campbell, who also directs. Kamaria Atiba’s thoughtful lighting and Maria Graham’s period costumes add to an effective look.

The weakness is the acting, which is not unusual in non-equity productions. Although the performers appear dedicated to this work, and several display periods of apt depictions, consistency is lacking. Many lines are flubbed and out of sequence, sometimes with the result of going off text. Even when individual lines are well delivered, timing between speakers is often halting. Despite this, Susie Butler is charismatic and generally on the beat as the demanding Ma Rainey. She also delivers a classy rendition of the title song. Ernest White as Toledo and Joseph Walters as Sturdyvant are the strongest among the other major roles.

This is an important theatrical piece that deserves to be seen. Hopefully the performances will improve as the run proceeds.