Audience as Congregation in Winston-Salem 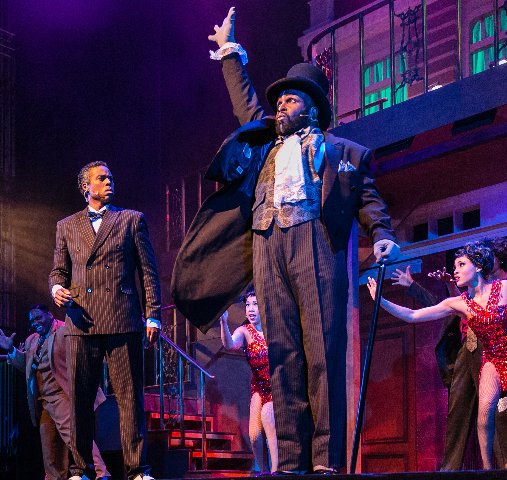 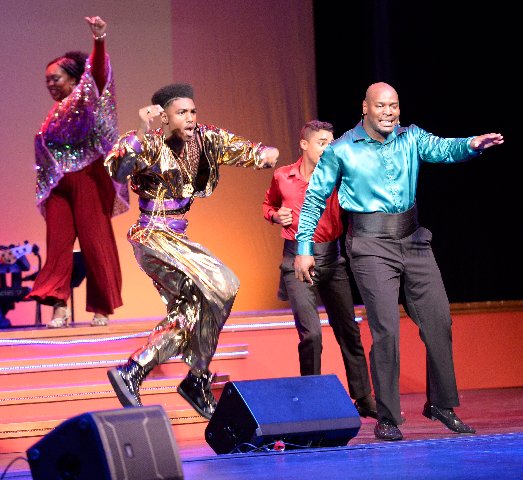 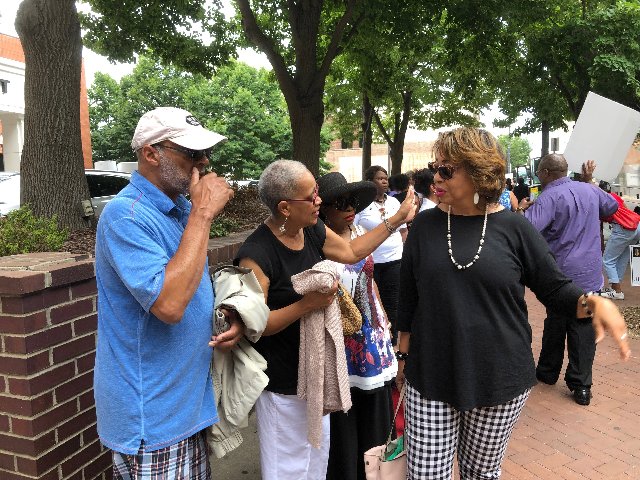 Waiting for busses in front of the Marriott. 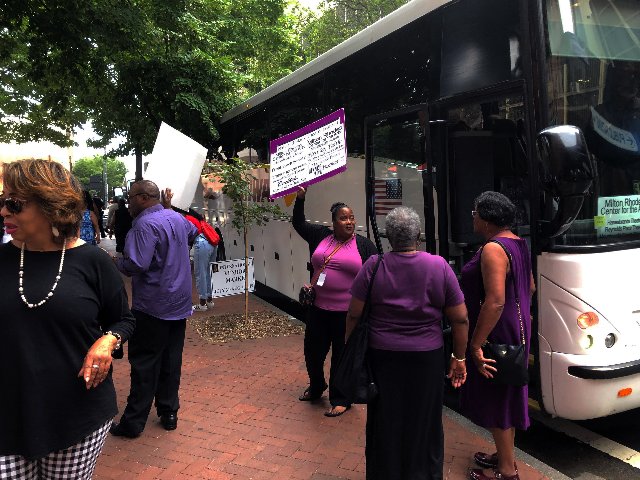 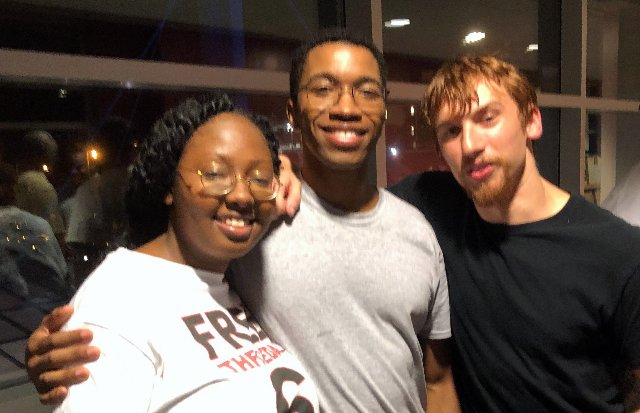 Performers from Blood on the Roots, 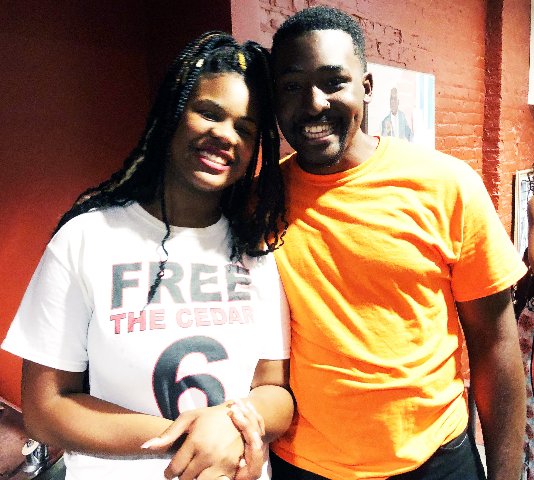 Stars of the college production of Blood on the Roots. 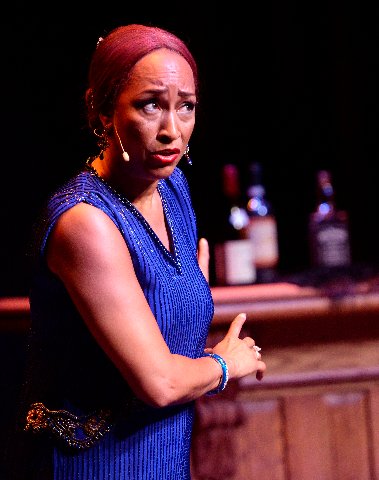 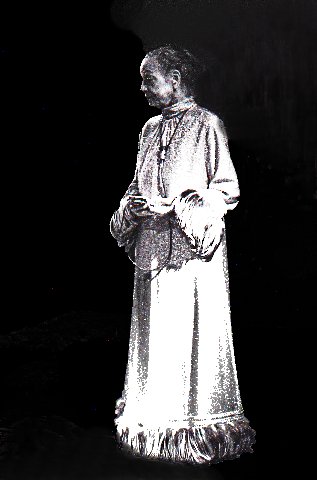 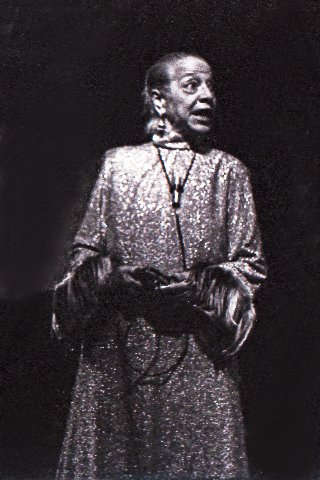 Bricktop regaled us with tales of the rich and famous. Giuliano photo.

There were some 250 applications from the United States, Canada, Great Britain and South Africa. In June a program of 30 productions was announced and particularly for smaller venues quickly began to sell out.

Many who have returned several times to the biennial National Black Theatre Festival book reservations in Winston-Salem, North Carolina well in advance. There was a fleet of busses in front of the downtown Marriott Hotel which transported patrons to theatres, large and small, all around the city and its immediate suburbs.

When busses return from evening shows the entrance to the Marriott is cordoned off. One passes through security to gain access to a party that spills out from the bar and flows into the lobby. The energy is palpable and set to a disco beat. We learned that many former tobacco loft buildings  downtown have been converted to condos. On any given night bars and restaurants are busy. During the festival just that much more so.

Waiting for transportation and enduring the heat we met folks from all over the country. There was a generally high level of excitement and appreciation from patrons from California, Philadephia, New Orleans,  Atlanta, St. Louis and beyond. An individual boasted that he is a Winston Salem resident. He has attended every festival since it was founded thirty years ago by the late Larry Leon Hamlin.

More than what’s on stage the greatest benefit of attending the festival is being part of a very special audience. With many middle aged and elderly couples and single women it might better be described as a congregation. Amens and testifying echoed responses of patrons to what they were identifying with in performances.

That spirit, indeed spirituality, was evident in those who had gathered from near and far to celebrate black history and culture. We overheard many conversations and critical discussions of what was presented. There were spontaneous reviews and recommendations. A day later a lady I had met on line asked what I thought of the one woman musical “Bricktop.” We shared our enthusiasm.

During breakfast at Best Western, a short drive from downtown, we interacted with patrons and performers. There was a wonderful sense of fellowship. There was a letdown on Sunday morning when many had already departed. What had been so lively now felt depleted. Fact is we much needed down time to recharge for the two day drive back to the Berkshires, and, you guessed it, more theatre.

One of many highlights of what we saw was expressed by the first song of The Movement: An A Capella Musical. Led by the activist and educator, Kathy D. Harrison, it was inspired by the Children’s Crusade of 1963. Teenagers and college students risked their lives in non violent protest in Birmingham, Alabama. Facing up to white supremacy they were assaulted, jailed, attacked by police dogs and knocked down by fire hoses.

The young people, who have remained largely anonymous, defied or deceived their parents to join the demonstrations. That riveting first song is “This is Our Story.” Its compelling thesis is that if the participants don’t tell their story then nobody else will. That was the essence of what we came to Winston-Salem to experience.

Dressed as a ‘teacher’ Harrison leads the young ensemble through an amazing cycle of song and dance. The a capella singing is enhanced by complex choreography. There is percussion created with foot stomping and body slapping. The pace of the piece is fast and absorbing. The manner in which the audience is pulled into the narrative was charged and galvanic. By the end of the piece you have a great connection with what happened in Birmingham. It conveyed the immensity and commitment of young people stepping up. We got to know them as individuals and threats they endured.

That powerful theme of “This is Our Story” threads through the festival. While the programming is enhanced by what’s  currently dividing our nation the roots go deeper than that. It wasn’t about putting the latest headlines on stage. Rather there was a timeless expression of the essence of  African American history and culture. There was a panoramic signifying of a vibrant creative community forged on the anvil of the greatest adversity.

By nature some of the work was harrowing. There were dramas we wanted to see but were sold out. We did manage Anne and Emmett which is a fiction imagining Anne Frank and Emmett Till as teenagers. The story of Anne Frank was readily familiar while that of Emmett Till has rarely had this level of aesthetic attention. There was a stark confluence of the Holocaust and murder of young black people in America. Not only were the murderers of Till found not guilty by a white jury they made several thousand dollars each selling their stories to a magazine.

While that powerful production was, for me, the emotional matrix of the festival there was a broad celebration of black entertainment. We attended two juke box musicals Soul Man and Women of Soul. With no real attempt at plots they presented superb simulacra of the great music of the classic era of soul from the 1960s through the present. There was great enthusiasm as the audience responded to their favorite musicians and hits.

There was greater complexity and depth to a revival of the Broadway show Jelly’s Last Jam and an intimately crafted portrait of the cabaret diva Bricktop.

Both shows were enormously successful and entertaining. On a personal level, however, I found them problematic.

As a jazz critic I know more about Jelly Roll Morton than was projected through a fictionalized theatrical persona. As a creole from New Orleans much is made of his racism toward negroes. That is a fact but it comes to dominate a narrow view of him as an opportunist and scoundrel.

The true Jelly Roll is better represented by the sessions that documentarian Alan Lomax recorded for the Library of Congress. He also wrote one of the great jazz biographies Mr. Jelly Roll. In the 1960s I wore out the grooves of a set of LPs on Riverside Records. The series has been reissued in a boxed set of CDs but does not contain all of the original material. In songs like “Whinin’ Boy” he could be downright filthy. It may be an acquired taste but his barrelhouse and stride piano on tunes like “The Pearls” cut to the heart and soul of the roots of jazz. His "Shooting the Agate" captures the fashion and persona of denizens of the sporting life. This seminal Morton material is not part of the musical which is a pastiche of his compositions.

As a New Orleans "professorm" the term for brothel pianists, he was well versed in classical music as well as the ragtime and barrel house that derived from the earlier Scott Joplin. For the many balls and cottilions it was required that musicians be versed in a great range of music. For Lomax he demonstrated many different styles performed for diverse social gatherings. History has focused on the emergence of jazz. Morton had various successful configurations of his band The Red Hot Peppers. When his era went out of fashion he eked out a living as a solo cabaret performer. He died poor and obscure at 51 in 1941.

Absurdly, Jelly told Lomax, “I Jelly Roll Morton did in fact invent jazz and that is the truth.” That’s quoted in the musical to make him look like the scoundrel which indeed he was. There is a passing mention of early trumpet legend Buddy Bolden and Louis Armstrong who got his break from King Oliver. But that’s a story for another time.

I flat out loved Cathey Sawyer's Bricktop: Legend of the Jazz Age. Gabrielle Lee is a terrific singer and dancer, more so, than Madam Bricktop herself. By her own admission Bricktop didn’t have much of a voice. The rich and famous, the entire cadre of Americans in Paris, flocked to her intimate club. They came, not to hear her sing, but just to bask in the presence of the great diva and social matrix of the lost generation.

When John Steinbeck was drunk and obnoxious he was 86'd from the club. Begging for forgiveness he sent her a cab crammed with long stemmed red roses. With depression then war the party ended. Back in the States she again confronted racism. She struggled to survive with clubs in Califormia, Mexico and Rome. Because most of her career was spent abroad Bricktop was not well know to American jazz fans.

In 1972, Bricktop recorded, "So Long Baby," with Cy Coleman. She also recorded a few Cole Porter songs in NewYork City at the end of the seventies with pianist Dorothy Donegan. The session was directed by Otis Blackwell, produced by Jack Jordan on behalf of the Sweet Box Company but never released. Her autobiography Bricktop by Bricktop was published in 1983. Bricktop died in her sleep at her apartment in Manhattan in 1984, aged 89.

She was in her 80s when I saw her sing/recite “Miss Otis Regrets She Cannot Dine Today.” At the Boston, South End cabaret, Lulu White’s we reveled in her aura. She just kind of stood there in a flowing gown and radiated all that culture and history.

There was much to remember and reflect upon during the long drive home. Lord willing we will be back two years hence.