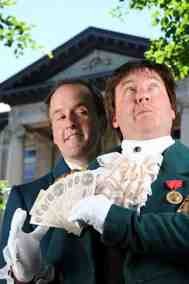 Stephen Weitz and Gary Alan Wright played off each other as Mayor and putative inspector general in this production.

When a play has been performed as often as The Inspector General has over two centuries, it experiences many transmigrations. The theme of pay to play, however, is recognized throughout the world and audiences everywhere respond to this comic take on typical government operations.

The Colorado Shakespeare Festival, one of the marvels that bloom in summertime to celebrate the Bard, imported Russian director Zvenyatsky from Vladivostock.  Zvenyatsky spoke only Russian. None of the cast spoke Russian.  Four Russian actors were imported during rehearsals to provide mirroring objects.   The translator found  their  Russian untranslatable, and the cast was left to take physical directions for blocking which were copied directly from the Gorky Theater production.  As for the emotions to be expressed, the actors looked for mad, glad, sad and bad in the director’s face and his body language. After a predictably bumpy start,  channels of communication opened up.   Nyet was always nyet and Ð´Ð°, Ð´Ð°, but the rest was Greek so to speak.

Because the cast had no idea what they were doing, they looked to audiences to see how things were going.  Tuesday’s audience was wildly enthusiastic, led by a balcony full of high school students studying math and science under a NASA program in Cheyenne.

While chicanery continues to be the modus operandi of governments throughout the world, what occurred on stage was not as subtle as corporate lobbyists and PAC donations in the US.  The first lagniappe was greyhound puppies.  Lots of rubles floated around and credit cards were swiped (through adding machines) on stage.  Gogul wanted contemporary references like this to be inserted.

The heart of the delightful production is the style itself, a surrealistic and choreographed take which starts with the set by Vladimir Koltunov.  Images like those of contemporary Russian painter Victor Razguollin and more traditional early 20th century painter Pavel Filinov dangle from the ceiling and dance on the stage floor.  The mayor's car, which arrives twice, reminds us of the remark made by Gore Vidal to a Soviet official when they were discussing what Russia and the US had in common.  "Neither of us can make cars," reported Vidal.

The cast, which performs annually in ensemble at the Festival in Boulder, is excellent throughout.  Moving to choreographed emotion, often stopping to hold a pose like an arrested Muyerbridge stroboscope, and responding to clever and apt music inserted throughout,  the actors developed a style that might have been hodge podge with so many elements to weave together.  Instead the production was coherent and often uproariously funny.  Although the actors sometimes had to rush their lines and then abruptly stop, there was no sense of unintended disjointedness.

Jamie Ann Romero as the Mayor's daughter would rush across the stage like Liza across the ice and then jerk to a stop, arms akimbo and mouth wide open.  Like a circus, three acts often went on at once.  For the actors, this was difficult because it went against their training to respond to others on the stage.  To keep three or four rings going to once, each actor has to pay attention only to his own business.  Tough stuff.

Apparently the show closely followed its Russian counterpart. Music from the production in both countries included Carmen, Rigoletto, Ave Maria in major and minor keys and traditional Russian folk tunes on the balalaika.  The director's daughter, an opera singer who may have helped with the music, sang a good luck aria to the cast before the performance schedule began.

You would never know that the production was the most difficult these actors had ever undertaken.  Perhaps the grueling preparation and the difficulty of communication actually helped form a great stage presentation. What a marvel The Inspector General is.  What a brilliant troop is this ensemble at the Colorado Shakespeare Festival.