Nurtured on the Mother's Milk of Producing 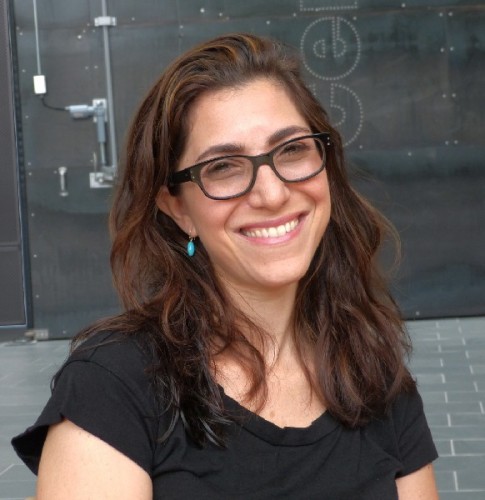 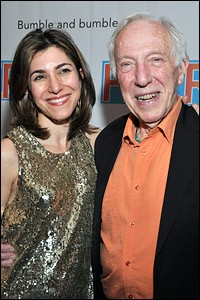 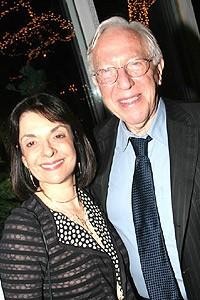 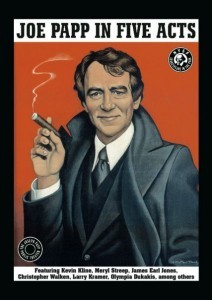 Jenny grew up back stage at Joe Papp’s Public Theatre for which she later worked. 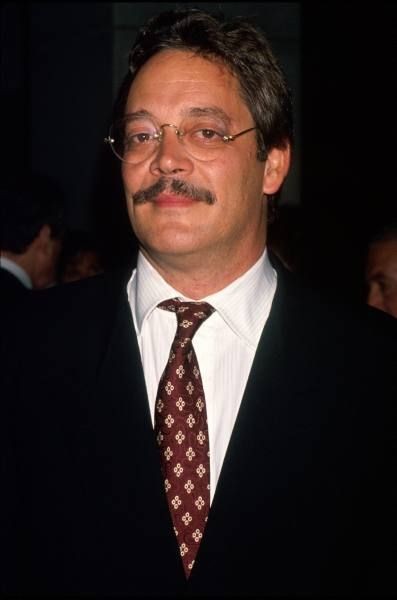 Raul Julia was a friend of the family. 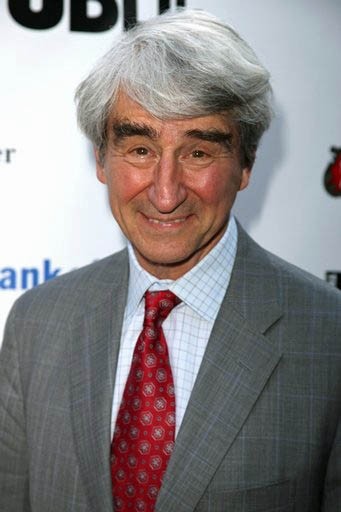 Sam Waterson and his family were like kin to Jenny. 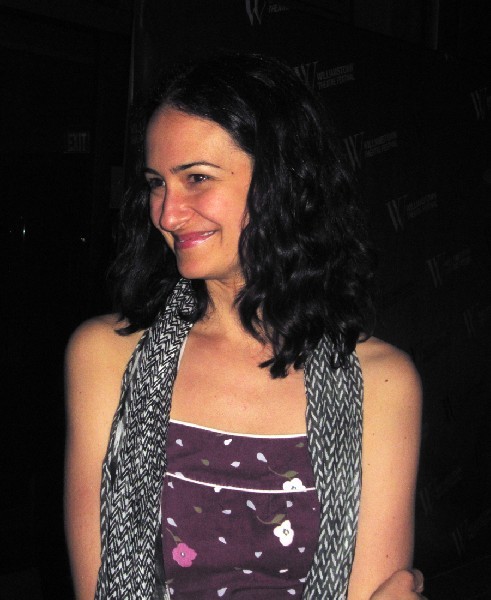 Elisabetrh Waterson appeared at WTF this season in A Month in the Country. Giuliano photo.

The second season with Jenny Gersten as artistic director of the Williamstown Theatre Festival ends this coming weekend on August 19. When we met the final of seven plays had opened the night before. After the hectic summer we are about to get our lives back in order. On many levels, for her as artistic director, and for me as a critic, the program went a lot smoother this time.

Enjoying a bit of breathing room we discussed an overview of WTF as well as a childhood spent growing up in the theatre.

Charles Giuliano You have had a unique life in theatre. Most girls don’t say, "I want to grow up to be a producer." Can we start with your memories of  Joe Papp (1921-1991, founder of Shakespeare in the Park and the Public Theatre). Were you old enough to remember him?

CG As he did with many people.

JG He had a few major rifts with people who were close to him. When he was ill with cancer he and my father reconciled. Actually, I came home from college and Joe’s son, Tony, was dying of AIDS. Tony was in Joe’s apartment dying and Joe was in our apartment dying. Until Tony died and then Joe convalesced at home. While Tony was dying Joe stayed with us. Because there were only so many sick beds in one apartment. It was wild. My parents were not living at our apartment but I was living there because I had just come back from college. My parents gave Joe their room and I was staying in my old room. Tony died while I was there so I mourned Tony with Joe.

CG Can you talk about the interaction you had with him during that time?

CG Did you see any of his professional work?

JG I saw the plays my dad produced but I was a kid. I remember Chorus Line very, very well. That was just an amazing time at the Public and the energy from that certainly did not escape me. I remember Threepenny Opera that Richard Foreman directed and Raul Julia was in it. I remember very strongly some Shakespeare in the Park from my youth. The first show I ever remember seeing was Two Gentlemen from Verona the musical (book by John Guare and Mel Shapiro, lyrics by Guare and music by Galt MacDermot). That was the Public Theatre’s first major Broadway success (1971). I have some memory of that but I was two.

CG You remember seeing it and you were two!

JG Uh huh. Absolutely. I was also two when my mother (Cora Cahan) was dancing at Jacob’s Pillow and I have the vaguest recollection of that. She brought me on stage.

CG To do what?

JG When she took her curtain call she just brought her baby out. I have a very vague recollection about that too.

JG Tracie, the filmmaker, and I were in close touch. She was trying to get the movie released when I was working at The Public. I was her liaison to the institution. The work she did on the film predated my time at The Public.

CG There is certainly an irony that your father was fired by The Public Theater and you later worked for it.

JG I actually don’t think it’s ironic at all. It was total purpose. There was intention. In a funny way I was always driven to go back and work at The Public. Partly because, having spent my childhood there, with really fond memories, my earliest theatre memories are from The Public, it held a place in my heart. That’s very real. But also to sort of, and perhaps this is the irony you mean, to make amends with the institution for the Gersten family. It felt important.

CG When you were a kid how much were you going to the theatre?

JG I didn’t go to the theatre the way that theatre goers go to the theatre. I hung around the theatre quite a bit. Back stage. Sitting on the steps. Watching bits and pieces. My Dad would go for Curtain Up or Curtain Down. I would come with him. I didn’t see Chorus Line from a theatre seat. I saw it from  the steps of (The Public Theatre’s) Newman (Theatre, 1975). I remember the visceral feeling of sitting on those steps. It was really a back stage experience and not like I was seeing Shakespeare at age five. They knew better than to subject me to that.

CG My parents were doctors and during dinner would discuss their cases. I grew up hearing about the man with the leg or the woman with the stomach. It was assumed that I would be a doctor but I passed out when, as a teenager, my dad took me into the OR to watch him perform a C Section. So what do you recall as dinner conversation when you were growing up? How much was theatre a part of your family life?

JG They would talk but it wasn’t so much theatre as it was non profit arts management. My mother ran a dance company when I was growing up, the Elliot Feld Ballet. Then she built The Joyce Theatre for Dance when I was a teenager. (Founded in 1982, The Joyce Theater was created by dancers for dance. The Joyce is considered one of the premiere performance venues for dance and attracts an annual audience of more than 140,000. Since its inception, The Joyce has welcomed over 270 New York City-based, national and international dance companies to its stage.)

Instead of C Sections they would say “I asked someone for a million dollars today.” Or “How did that go?” or “I have a problem with our board of directors, how should I solve it?”

CG How did that bounce off you as a kid?

JG It was all I knew. It was just what we talked about, fundraising, budgets.

CG How about theatre people? Who came to the house?

JG I remember a lot of time in our house with Joe Papp smoking a cigar and singing old Irish ditties. Raul Julia actually came over quite a bit when I was a kid. I thought he was magnificent. Just magnificent. Sam Waterson and his family was a big part of my growing up. This summer Elizabeth is here (A Month in the County). I didn’t grow up with her but his son, who is my age, and I did grow up together. I knew her brother really really well. So the Watersons are like kin. And a lot of dancers. Let’s not forget that.

CG In Condivi’s Life of Michelangelo he describes how, as an infant, he was nursed by the wife of a stone cutter from Cararra. So he was nurtured on the mother’s milk of the quarry. Could we assume that, similarly, you were weaned on the breast of theatre?

JG Yeah, but I think I have to distance myself a bit from the Michelangelo analogy. (Laughs) You’re right. My father always said to me “I’m sorry that we ruined you by raising you in the arts. There’s many other things you can study and be interested in. We’ve neglected our duties as parents.”

CG Are you an only child?

JG I have a sister. She works in non profit arts. She works for BRIC Arts Media which is a Brooklyn based arts organization.

CG When did it become a conscious decision that you would follow this career path?

JG I knew it in high school. I was interested in producing and, by 17, I had my first internship at an organization my parents had nothing to do with. It was my first real job outside of them.

CG When we first met, now more than a year ago, I got in trouble by asking what shows you would direct that season. We got started on the wrong foot.

JG That was the presumption.

CG In the time since then, including paying some dues, I have come to dwell on the subject of just what is a producer. Through you, and issues that arose between us, I have been rethinking and actually studying you and what you do, particularly this summer. In trying to come to a better understanding of what this job entails. How is a season planned, what are the issues of particular productions, how does it involve you, what kinds of decisions are made? There has been a learning curve and this is an opportunity to talk with you. It’s very specialized. Being a producer seems mostly like something that people back into through a process. I can’t think that someone would say “I’m going to be a producer” any more than someone would say “I’m going to be a critic.” There is a lot of serendipity in how one finds themselves in these unique positions. Did you always know that you wanted to be a producer and what did that entail?

JG Ok. Just to start. First of all, I want to thank you for paying me so much attention to what I do producing. Because not a lot of people appreciate what I do. You also referenced earlier the disharmony we experienced and I want to go on the record (laughing) that I really appreciate both of us really paying more attention to each other.

CG I think so.

JG I’ve been studying you too. I love the mutual understanding we’ve come to. Going back to your question I don’t think that I necessarily set out to be a producer. I always modeled myself directly after my dad who was a managing director. The person who stands behind the artistic director and makes the organization function so the artistic director can have a vision. You talk about backing into something, I never intended to be an artistic director. To find myself in this position continually takes me by surprise.

CG Actually, you first came to Williamstown in that role under Michael Ritchie.

CG Everyone who remembers you from that time recalls you doing a terrific job.

JG In that sense I was a good producer in terms of helping to make the institution operate and function based on whatever the artistic director set forth as the direction for the organization. The common expectation is that most artistic directors are directors of shows. So your presumption last year was really appropriate. The trick about Williamstown, and why the board was interested in hiring someone who wasn’t a director, this go round, as opposed to when they had Nicky (Martin) and Roger (Reese) were here was that, if you’re directing a play in a ten week season, you’re kind of out of the driver’s seat of the institution for at least three and a half weeks. You’re in rehearsals eight hours a day. You have to have artistic meetings outside of that. And then you have to run the organization. If someone is not directing they can give their full time to an eagle’s eye view of the institution. In the way that someone in rehearsal has to pay attention to a show, a cast, or group of designers, couldn’t.

CG Roger Reese even had a show in the black box theatre The Physicists which he performed in.

JG He added one. God bless him. In collaboration with Williams which was really a great idea.