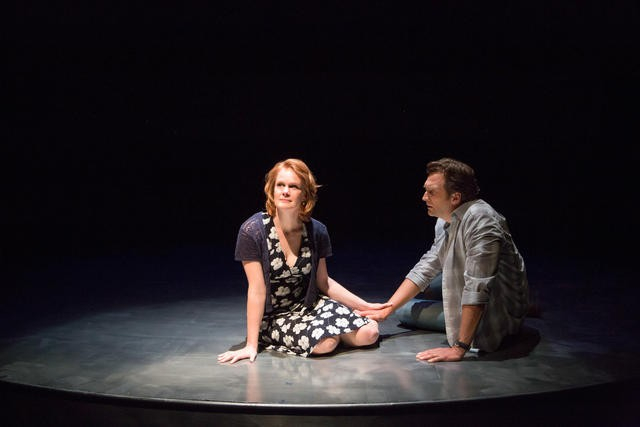 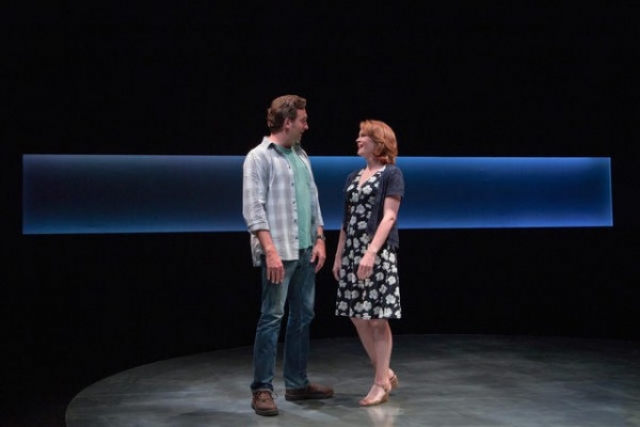 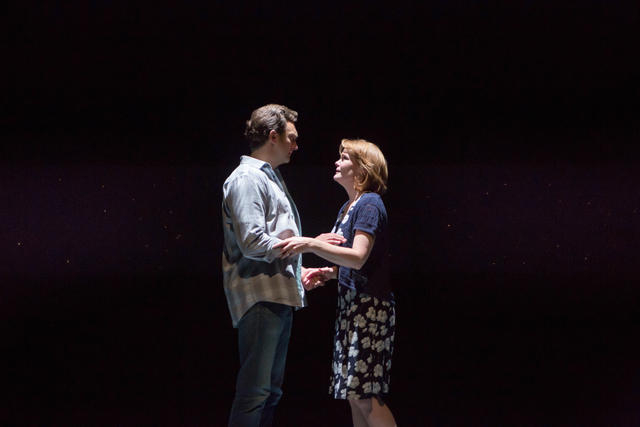 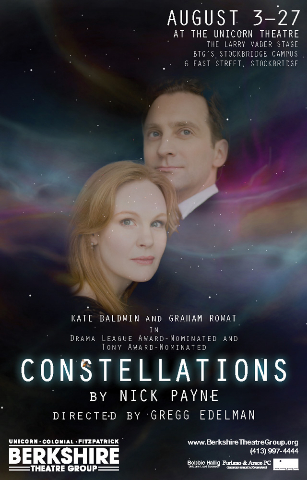 Constellations, by the brilliant British playwright Nick Payne, is a love story set against the backdrop of quantum physics.  This may not sound appealing, he gives us a lot to ponder; about love, chance and choices.

This 70 minute production, which premiered in London in November 2012, and was produced on Broadway in 2015 by Manhattan Theatre Club, centers on two characters.

Marianne, a quantum physicist, and Roland, a bee keeper.  Their unlikely pairing progresses throughout the play in an unlikely method.

As Marianne, played by a spot-on Kate Baldwin, and Roland, sensitively played by Graham Rowat, meet, the audience sees several variations of the possibilities of their meeting.

As Marianne ponders the major theories of physics, she suggests that “a single by-product of every single one of these theories…is the possibility that we’re part of a multiverse.”  Because certain “microscopic observations” cannot be predicted with certainty, it is possible that “at any given moment, several outcomes can exist simultaneously.”

Their meeting at a friend’s picnic is repeated with small variations.  In one version, Roland is married, in another he is single, in another just separated.  Here, we begin to see Marianne’s meaning, and also witness superb acting, with slight variations in each version.

The fact that there is little to identify the setting, a simple stage, and lighting by Allan Edwards and sound by Scott Killian, focuses the audience all the more on the emotions of Marianne and Roland.

We focus on the idea of chance, that if one little detail were different, the outcome might be as well.  As Marianne states, “If every possible future exists, then the decisions we do or don’t make will determine which of the futures we actually end up experiencing.  Imagine rolling a dice six thousand times.”

As the relationship progresses, we see the characters develop in their love for one another and choices again are looked at from different perspectives.  Infidelity appears, and illness.  Despite the brevity of this play, and the spareness of the dialogue, the audience grows to know this couple and their struggles.

This is a play that is intelligent, touching and nearly perfect.  It succeeds because of the collaboration of playwright, director and excellent actors.

Kate Baldwin and Graham Rowat, married in real life, have performed previously at BTG in two musicals – last season’s Bells Are Ringing and A Little Night Music in 2014, both at The Colonial.

In this performance, they have succeeded in hitting the high and low notes of their characters’ lives, moving seamlessly from one universe to another, bringing the audience along with them.