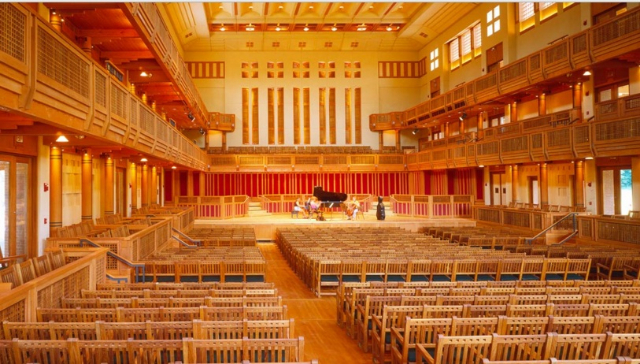 Osawa Hall, the site of the Festival 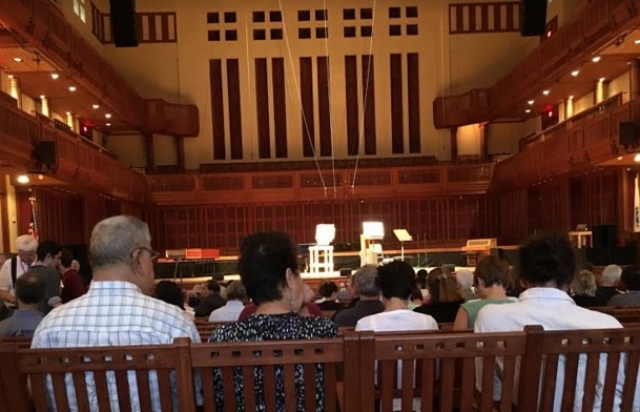 Audience at the ready 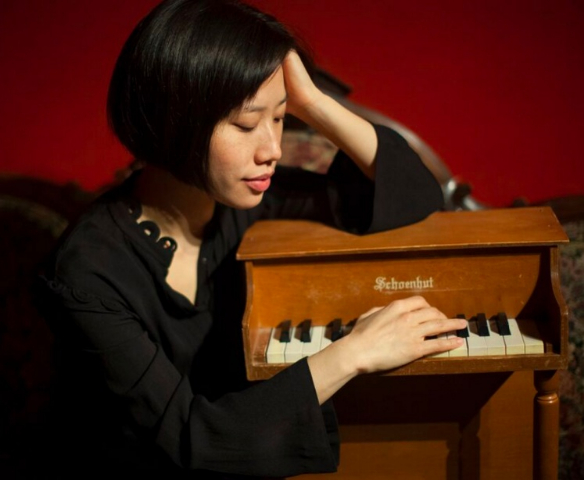 Phyllis Chen and her toy piano 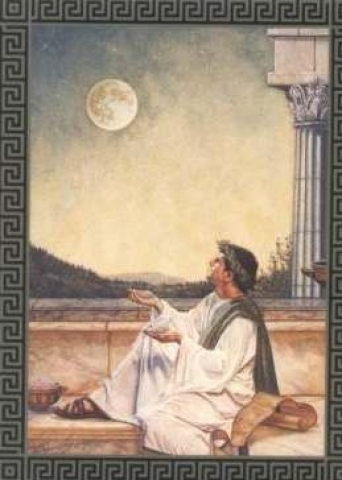 The Festival of Contemporary music is a highlight of the Tanglewood season. Curators assemble concerts from commissioned works and also from composers whose works form the canon of the contemporary music scene.

The opening night concert was curated by Jacob Greenberg. A former Tanglewood fellow, he is a longtime member of the International Contemporary Ensemble. He explains his choice of compositions, emphasizing that all musical instruments strive to imitate the most perfect musical instrument, the human voice.

Yet much of the singing of the evening showed singers trying to imitate that odd sounding percussion group and other unlikely sounds of the universe.

Soprano Paulina Swierzek takes the language of composer Andrew Cheung’s translation of Vladimir Nabokov’s Art of Translation and brings forth not only her own beautiful voice, but its sometimes harsh, mumbo jumbo in translations. Cheung points out that music is a translation form. He dove into exactly what that means.

Two more familiar composers were interspersed during the evening. György Kurtág goes back to Ancient transcriptions, which were sung with force and sensitivity by tenor Daniel McGrew.

The Kurtág selections included the Hölderlin songs, dedicated to Zimmer. Beginning with the description of a path through life, baritone Ryan Cherry stretched, retreated, questioned and announced as he started on the vowel “U” sung alone.  It is the first of many echoing phrases and hummed sections in the cycle, which provide a wordless counterpoint. The echo disappears in the centre of "An..." at the point of most direct, personal, expression, "I want to sing of you, but only tears...."

It was Zimmer who cared for a seemingly disoriented Hölderlin. Cherry enjoyed his rip through the always deeply moving text.

Sofia Gubaidulina’s meditation on a Bach choral takes it notes and returns them to primordial darkness. A chamber group of Tanglewood fellows led us through its twisting course.

George Lewis’s Anthem was a riot of sound, partaking of jazz rhythms and wild clashes.

Special treats of the evening included Phyllis Chen’s Chimera and Nathan Davis’s The Sand Reckoner. For the uninitiated listener, contemporary music is often saved by the bell. Tones which are chiming, tinkling tintinnabulations please the ear, almost inadvertently.

Chen is fascinated by toy pianos. She describes her first reaction to music as tactile. She wants to hold the music. Davis also expresses this need.

How do you touch the music? You grab onto the instrument that is producing it. You take it apart and dissect its insides, in the case of the toy piano.

For Chimera, Chen has added a toy glockenspiel and tuning forks. Toy pianos use metal rods, not strings, so their tones are like those of a tuning fork. Tinkling.

Chen contrasts these sounds with a violin and clarinet also performing. They were lovely, but very old-fashioned. The piece was both other-worldly and charmingly comic.

William Blake, the Wycliffe Bible and a French comptine were added to Archimedes, “The Sand Reckoner” for the Nathan Davis world premier. Here too we have those wonderful bell-like sounds, this time emerging from the curator on celeste, and also seven exceptional singers.

If you’ve ever wondered the relationship between mathematics and music, Davis proposes an answer that is both wise and witty. He lums on to the word ‘myriads’ and we learn of the myriads of radii that spread across the space around us. Only music can fully suggest the ways in which the celestial world outside us works.