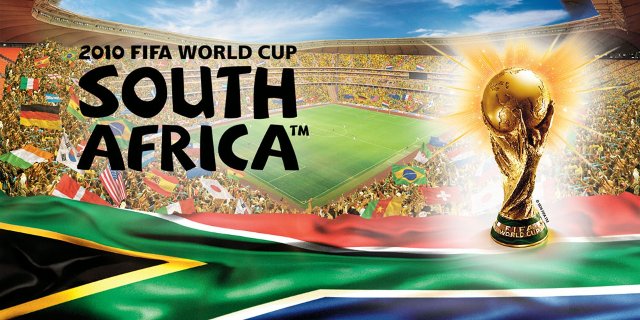 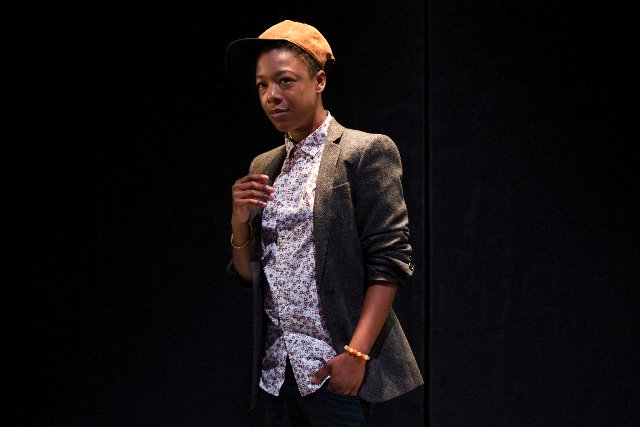 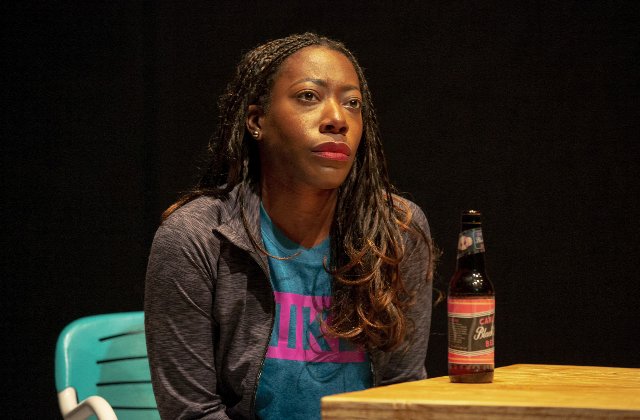 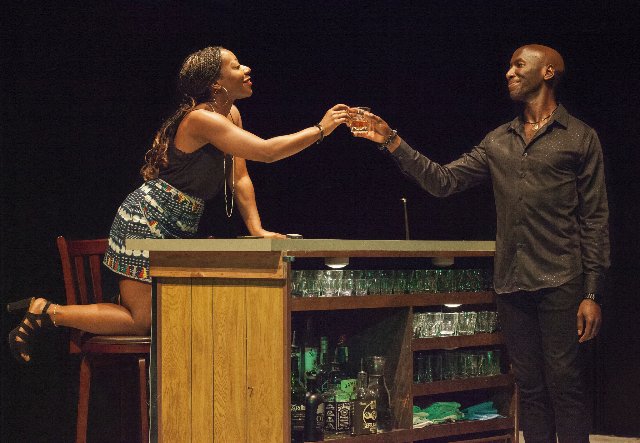 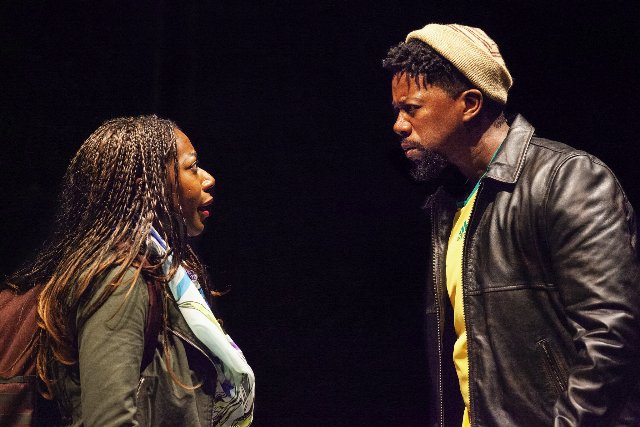 The events of Dangerous House, by Jen Silverman, occur framed by that event as viewed from London and South Africa.

On the small Nikos Stage is a large black box with a pattern of raised textured panels with beveled edges. Initially, the design by Dane Laffrey crowds the space for performance in front of it. It later unfolds into a sparsely furnished, squalid apartment.

It is where a gay woman, Pretty Mbane (Samira Wiley), at personal risk that results in her murder, shelters lesbians who have been raped and assaulted.

During the excitement of the World Cup, with a global focus on football, there was media distraction from the dark underside in the black comunity of violence toward gay women and men.

Poor and uneducated  black culture condoned “corrective rape” of lesbians as ersatz therapy that will scare them straight. The women allegedly cured of an affliction are left vilolated at the side of the road. Those who did not die of assult often contracted AIDS from their attackers.

Pretty rescues victims offering them care and shelter if not security. The who, how and why of her murder is the agenda of Silverman's harrowing, roiling drama.

With too rare skill and success Silverman has accomplished a most daunting challenge. She had laid bare the most horrific injustice through a superbly measured and masterful drama. Unfolding in one act we come fully to appreciate the tragic complexities, passion and frailties of the characters. There are revelations and reversals as vividly conveyed wrenching events unfold.

The playwright has opted not to depict rape, murder and assault.  By avoiding specific views of violence she focuses on the devastating impact on and conflicts of the characters. This is particularly poignant when a brother, Sicelo (Atandwa Kani), participates in the murder of  Pretty, in his view, to protect his sister, Noxolo (Alfie Fuller).

When this is revealed Noxolo is distraught that her brother is no better than a brutal gang of muderous thugs. He was the driver for the gang. We are confronted with the moral dilemma of judging a man pushed to the limit in protecting his sister. Without walking in his shoes who are we to say how we would act? To save Noxolo he has been complicit in the muder of her loved one. Silverman has woven those conundrums into compelling theatre.

In 2006, South Africa became the first country in Africa to protect sexual orientation as a human right under its constitution and, as of 2018, it is the only one. But legislation did not end violence. It takes more than rule of law to transform deeply rooted ignorance.

The character Pretty Mbane was inspired by Ndumie Funda. In 2011 she petitioned parliament to legislate corrective rape as a hate crime. She founded a nonprofit, Luleki Sizwe, a safe house for assaulted and homeless women.

Against a blackened background we meet Pretty as a feisty, street wise. swaggering woman who brags about her many girlfriends. In a nuanced performance by Wiley we experience her humor, self confidence, ego and vulnerability. While projecting seductive arrogance she reveals how when attending soccer games, which she doesn’t even enjoy, she stalked a rising star.

On her end Noxolo was drawn to the woman showing up at games and staring at her from the stands. Initially, Pretty acts tentatively as though the rising soccer star is beyond her reach. A first kiss ends that anxiety.

For Pretty the unthinkable occurred. She fell in love and became emotionally dependent on Noxolo. For a tough seducer and survivor the hardest challenge has been to open herself to another woman.

Her greatest anxiety is to reveal vulnerabity. In her purview it's the fatal tragic flaw. By seizing the opportunities of London Noxolo fails to comprehend how utterly she has betrayed and destroyed her lover. When that fate is revealed it will fuel her remorse and redemptive actions.

There is a small yellow footlight which Pretty refers to as the yellow dog. It is a surrogate for the hellhound on her trail and hoodlums that eventually trash her house with murderous mayhem. In a later scene with Noxolo that metaphor is repeated with new significance.

Assisted and supported by her brother Noxolo accepted a football scholarship in London. The alternative was to play for the national women’s team. But education offers a brighter future.

She has taken a job in the bar of the former South African, Marcel (Phillip James Brannon). His bar is abstracted stage left. Wearing a trendy leather outfit (by Dede Ayite) Noxolo acts more like a client than employee. She keeps inconsistent hours and on a day off shows up after hours to drink and hang out.

They share a love of soccer and watching the historic games. While they are proud of the country displayed on a world stage it evokes disturbing memories of home. There is unrequited longing for Noxolo missing Pretty but, for Marcel, determination to escape the horrors.

Their views differ. Noxolo recalls "But the skies are so wide even in the city. The way people smile — on the streets — it is not just their faces, but their entire bodies that hold the smile. Do you remember that?"

Responding for her longing for Pretty, Marcel says "Whenever you're drunk you say her name like it's the only language you remember."

When impulsively Noxolo flies home to find pretty she stays in touch with Marcel through Skype.

Another pairing focuses on the American journalist Gregory (Michael Braun). He is a freelancer looking for unique angles. Sicelo has been a guide bragging about showing his client the best bars and restaurants. But Gregory wants to dig deeper which alarms Sicelo.

In the process of research Silverman has Gregory morph from objective observer to participant. That didn't ring true and was out of character for a journalist used to covering war zones. She has him cross the line by becoming a part of the story he is reporting. That's a professional no no.

The play ends with a Gordian’s Knot of conflicts. It’s dark on dark.

While a difficult and demanding experience there was much to respect and admire about this galvanic production. The performances are uniformly excellent particularly their mastery of South African cadences. The dialect coach was Barbara Rubin.

Broken into scenes and vignettes, in London and South Africa, there was a challenge to make a whole of the sum of parts. As directed by Saheem Ali there is plausible cohesion to the drama. He navigates from global celebration to unchecked, ever more horrific momentum, that catapults inexorably to an explosive climax.

I was left stunned, shattered, but hopefully informed and transformed.