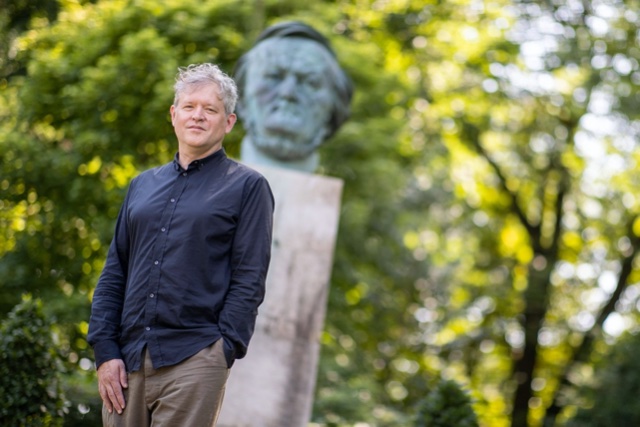 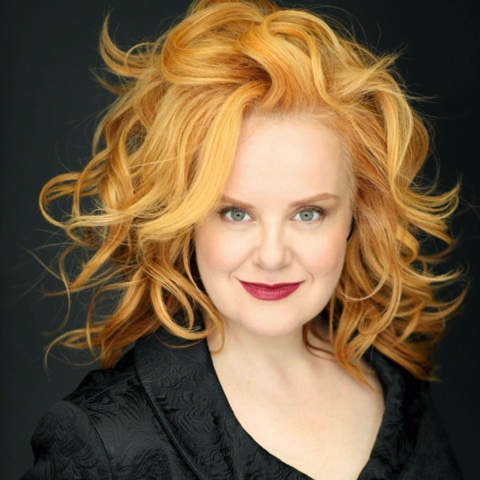 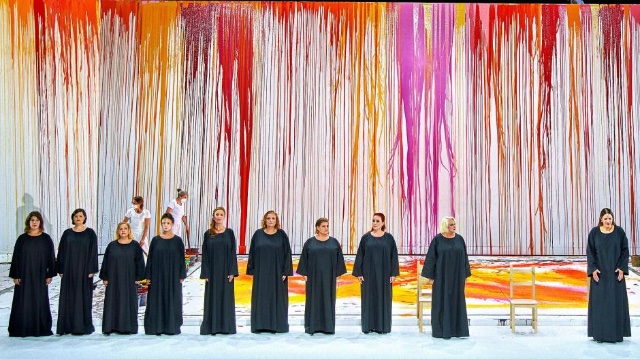 Parsifal in concert at Bayreuth. Images dripped in the background. throughout the performance.

One hundred and thirty-nine years after Richard Wagner’s final opera Parsifal premiered at the Festspielhaus in Bayreuth, it was performed in concert in this house that Wagner built for its performance. Apparently, Richard Wagner himself took the podium to conduct Act III of Parsifal at the Festival performance in 1883. He died later that year in Venice. There is no recording of the performance, but witnesses commented on the extremely slow tempos and the majesty of the reading.

Christian Thielemann conducted this year. He was music director at Bayreuth from June of 2015 to January 2021. Whether he will continue in the role is up in the air. He certainly is a master of the acoustical set up in the hall. Wagner designed the orchestra’s pit to send sound directly to the singers. Only the singers can see the musicians, who are hidden from the audience by a cap cupping the front of stage.

Instruments and voices are mixed naturally on the stage and loft up to the ceiling and the eight columns which line the walls. Sounds come to each and every member of the audience at the same time and in the same tonal shape. Sound democratized.

Thielemann’s pace was very slow and quiet. Not as slow as Toscanini’s take at four hours and forty-eight minutes, but slow. Pierre Boulez as a young man conducted Parsifal briskly at Bayreuth in order to “save” one of the world’s greatest operas by compressing it. The Wagner family, who control the Festival, invited him back at the end of his career, so they cannot be averse to experimenting with tempi in the founding father’s works.

In this concert presentation, you could sink into your seat, ears alert, and hear the pilgrim’s journey of Parsifal, from innocent to a compassionate and loving leader of the Knights who keep the Holy Grail. No doubt Debussy was right when he wrote of this music: “incomparable and bewildering, splendid and strong”.  Not so much a curse on the senses, as an enchantment of them.

Thielemann shaped phases carefully, always welcoming the Dresden Amen reference which rises in the opera countless times, as do the‘idea motifs’ of the 'communion'  ritual, broken down later as 'lovefest' and 'Holy Grail' motifs. This is a work in which music itself journeys with the pilgrim Parsifal. The radical repetition of note clusters suggests a path to Philip Glass. The slip from one key to another and then out of key to the atonal Arnold Schoenberg. And so on. It is revelatory music, attuned always to the story it is telling.

The singers sat in the center of the stage, the focal point visually.  Behind them still images, abstractions of trees and flowers and water, quietly enlarged and retreated, in black and white to brown at the opera’s start, and in green for Klingsor’s garden of delights.  Philip Furhofer is credited with their design, which is inviting and not obstructing. The music is all.

The cast features bass Georg Zeppenfeld as Gurnemanz. He has a large yet nuanced bass that fills the hall and captivates. The moment in the first Act where he declares that "time is space," we begin to experience the suffering. In concert, we have uninterrupted time to contemplate the complex ideas which lead to redemption.

Stephen Gould as Parsifal sang with exceptional clarity and beauty. The whole performance has an uplifting, shimmering quality which is present in the best performances  of Wagner's final opera.

Petra Lang and Michael Volle (Amfortas) are central to this telling. Their pain and suffering is ours. Volle helps us hear his agony as he varies the volume, the color and the feeling of his tones.

While the singers were off book, only Petra Lang gave a physical performance. We have seen her in Budapest, Vienna and Mannheim in the role she owns. Lang invests her voice and presence in the complex arc of this character. She has both sexual allure and penitential demure as Kundry. Her voice is sometimes lush and at others strident, as she moves from her narrator role informing the young Parsifal of his origins, to his seduction in the second act and her collapse to death in the third.

Stripped down in concert form, the movement away from deconstructing a composer’s work to seeking answers in the composer’s intention is present. It is a welcome return in opera performance.

At Bayreuth you are acutely aware of the controversy that surrounds Wagner. Thielemann has been chastised for defending the composer’s racist remarks. Yet recent literature including the work of British philosopher Roger Scruton and Alex Ross' Wagnerism suggest a complicated man of great humanity, whose influence is probably greater than that of any person who ever composed.

The mixing of politics and music is disastrous. Painting itself is not criticized because Hitler was a painter. That Hitler poured over the scores of Wagner’s music should not color our measure of the man.

What manner of man, after all, could so magnificently tell this story of suffering transformed to compassion and love. At Bayreuth the answer was clear in this performance of Parsifal.