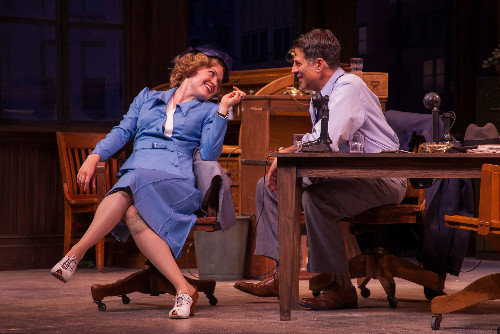 Hildy (Jane Pfitsch) and Walter (Christopher Innvar) are divorced but still have sparks for each other. Kevin Sprague photos. 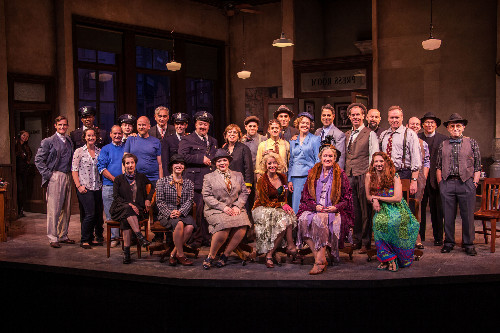 The cast and crew of a massive Barrington production. 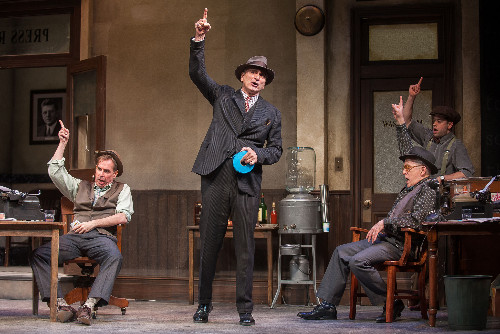 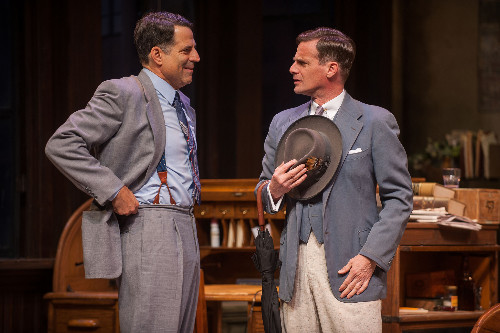 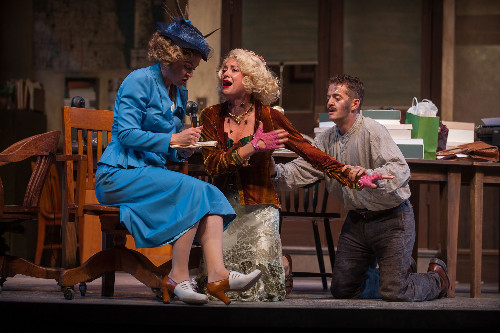 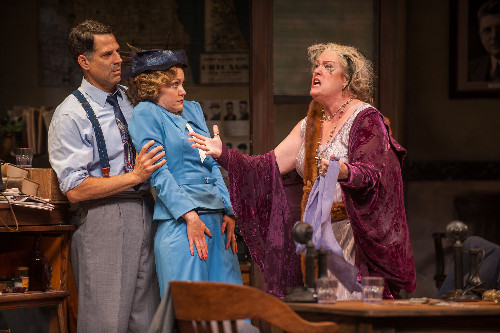 Peggy Pharr Wilson as the pending mother in law from Hell. 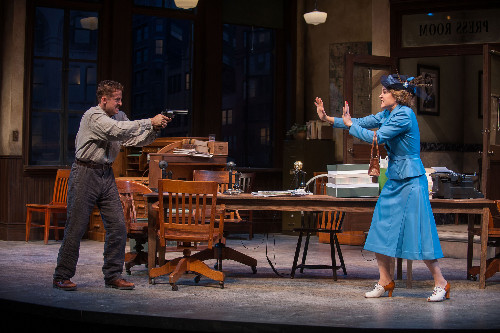 The condemned man has escaped. 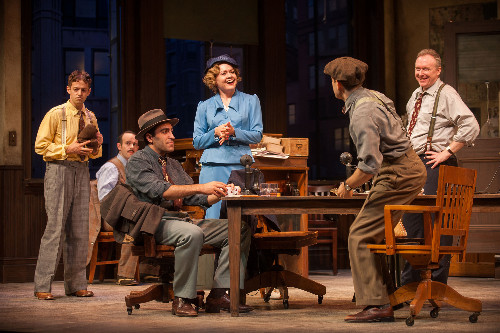 Hildy and the boys.

It is August 31, 1939 as the world hovers on the cusp of war. In the Criminal Courts Press Room, Chicago, Illinois there is a vigil of reporters covering the 7 A.M. hanging of the immigrant, anarchist, cop killer Earl Holub (Ethan Dubin).

In the rewrite conflating the play The Front Page and film as His Girl Friday the playwright, John Guare, has included many references to the brinkmanship of American isolationism and Nazi sympathizers from within.

We also learn that it was a great year for cinema. At the tail end of the Great Depression it seems that Americans sought relief at the movies from Wizard of Oz, and Ninotchka to Gone with the Wind and Wuthering Heights.

But as Guare insisted during an at times contentious exchange with the media he has not written a message play. With emphasis he stated that “I hate message plays.”

Indeed this is a comedy with sobering and tragic overtones. There is a lot of gallows humor in media gathered to cover a necktie party. It is difficult to imagine how such a grim occasion proves to be so utterly hilarious.

That results from brilliant, zappy dialogue, and the frenetic pace of Julianne Boyd’s fiercely comedic direction.

As a veteran of a daily newspaper I particularly savored this view of a time when the media really mattered. In that busy press room there are reporters from five Chicago newspapers putting out multiple daily editions. Any fluctuation and update of news came with a replate of the front page.

How sad that so many American cities have been reduced to one or two daily papers and in some cases none. That makes for lazy reporting as most people get their news on line and through social media.

The play sets the table by getting to know the boys in the press room. They listen into each other’s calls as we witness facts evolving into the hyperbole of fiction/ journalism. There is a need to make every lead and headline screaming and sensational. These reporters live and die by the scoop.

This is a big production with 20 actors on stage in a range of speaking and walk-on roles. Boyd has doubled up with four actors creating an illusion of even more players. With that many characters there is a lot of intended mayhem with gangs crashing into each other or charging in and out of the press room.

While they try to get some work done, feeding the hungry beast by calling in stories to the City Desk, there is the distracting thud of the gallows being tested outside. We hear the sandbags drop as the executioners prepare their apparatus.

We learn that the trial has been a sham with inept defense and a mayor looking for an execution in a plea for Chicago's large German, and pro Nazi vote. It appears that Holub the anarchist killed the cop, a Nazi sympathizer, in self defense. He grabbed the weapon thrust in his face and gunned down the cop.

Later we hear him say that he became enraged to see that Nazi face in America. It evoked memories of the murder of his family and the reasons why he fled Germany. In its efforts not to be lured into another European war America wasn't ready to accept the truth about Hitler. Joe Kennedy stated that they are not that bad while Henry Ford advocated some of their views for a better U.S.A. Even aviator and national hero, Charles Lindberg, was impressed by their terrific Luftwaffe.

If not  for self defense at least Holub should get off on a plea of temporary insanity.

On her way out of town former star reporter Hildy Johnson, the nifty Jane Pfitsch, drops by to see the boys. She is headed to Albany with an insurance salesman Bruce Baldwin (Mark H. Dold) and his over the top mother, the absurdly hilarious Barrington veteran, Peggy Pharr Wilson.

Hildy met her intended in Reno then a mecca for rapid divorces. In the press room she runs into her former boss and husband, the crafty editor, Walter Burns (Christopher Innvar). He is a smarmy, charming cad who lures her into writing one last scoop.

Add to this heady mix Mollie Malloy (Anya Whelan Smith) a floozie with a heart of gold. Visiting the condemned man they have bonded in a manner that proves to be poignant, sad and ultimately tragic. We were enthralled by her finely tuned and tender performance.

There are other ingredient in this comic concoction  adding the maximum possible flavor and spice.

Particularly delicious was the outrageous Rocco Sisto as the ultra corrupt Sheriff Percival B. Hartman. This is the first Barrington appearance for a veteran of Shakespeare & Company.

He is an interesting addition to Boyd’s repertory company that in this production included Innvar, Dold, and Wilson. These ultra reliable actors have yet again provided stunning performances. Having seen them many times before we were amazed at their range and versatility.

Innvar has mastered the fast and loose patter with quick responses to multiple reversals required by the genre of screwball comedy. He has a perfect foil in Dold as a silly twit. Ultimately, he is a sitting duck for Burns who strives to win back his estranged wife and star reporter.

It’s really no contest as the feisty reporter is headed for the oblivion of, good grief, Albany. That earned hearty laughter from the audience. Also we are privy to the right wing Nazi views of Baldwin and his archly domineering and gonzo mother. When Hildy raises an eyebrow at this screed Burns jumps in with the drift that they are a little to the right of Attila the Hun.

All hell breaks loose when through a series of off stage blunders the condemned man manages to escape. Stop the presses. The reporters are dispatched to chase down that breaking news.

There are reversals layered onto reversals. The plot careens along with the ups and downs, twists and turns of a roller coaster ride. You have to hold onto your hat to keep up with the action.

So if you are looking for smiles on a summer night this is the show that is destined to please and amuse one and all. It is far and away the most side splitting play of the summer season.

Significantly, at least in this comedy, that breaking news didn’t make the front page of the morning edition.

Them was the days.