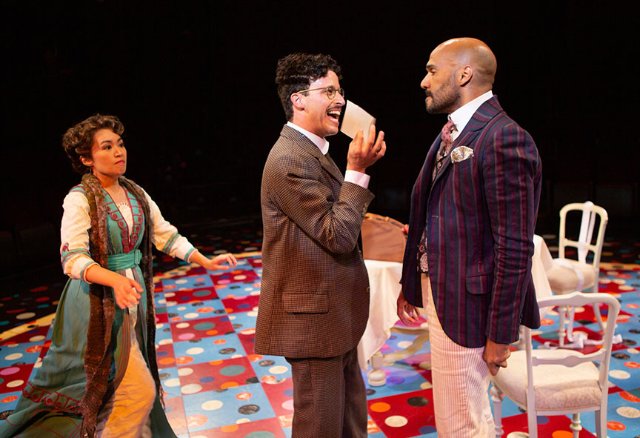 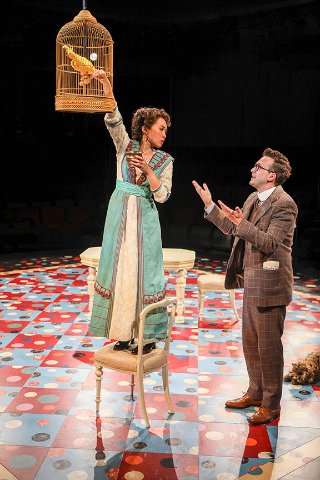 Silly is, as silly does, could easily be the subtitle following the name of the current comedy/farce romp “The Underpants,” now on stage at the Old Globe’s Sheryl and Harvey White stage.

However, when the playwright in question is the wildly talented and brilliant Renaissance man of comedy who writes, acts, directs and plays the banjo, in addition to being an award-winning producer/musician who is delightfully just flat-out, off-the-wall at times, and answers to the name of Steve Martin…well, attention has to be paid and attendance is a must.

Martin has been a quirky comedy writing and performing force since his debut in the 1960s on the “Smothers Brothers” TV show. He was the darling of late-night TV shows for years, appearing on the Johnny Carson show and guest starring on others. Martin, then answered the siren call of Hollywood,  scoring with such hit movies as his comedy adaptation “Roxanne,” a take-off on the Edmond Rostand stage swashbuckler “Cyrano de Bergerac,” the hero with the longest of noses, that no man dare mention in his presence without consequence.  Martin, the author/star of “Planes, Trains, & Automobiles,” “Father of the Bride,” and “Dirty Rotten Scoundrels” with Michael Caine among others, had talent to burn then and still does today.

This time, however, Martin is just the playwright.  The wonderful ensemble cast of seven solid Equity performers under the seamless, inventive, staging in-the-round, of Broadway director Walter Bobbie and frequent Steve Martin collaborator, is a winning combination once again.  Bobbie directed Martin’s recent Broadway hit “Bright Star.”  Their “Underpants” production is a comic feast for the eyes and ears along with the joys of experienced farceurs doing their physical bits while at the top of their games is fun to watch.

The production is based on the 1910 novel by German author Carl Sternheim, who wrote his intriguing and deliciously bawdy story of how German society dealt with the male vs. female relationships of their day was intended to be more of a sober documentary.

Once Steve Martin, however, got to apply his zany and off-the-wall playwright gifts to the script, director Bobbie doubled down as well delivering a hilariously funny, comedy romp, where innuendos reign supreme. There’s not a blue word uttered by anyone in the cast. Sex, you see, can indeed be discussed in polite company and still be enjoyed by today’s audiences; even for those who squirm a little bit in their theatre seat when the characters get sexy and the dialogue gets racy.  Comedy-farce is a great equalizer between men and women. If done right, both sides win.

In Martin’s adaptation of “The Underpants,” set in 1910 Dusseldorf, Germany, a fetching, young, beauty Louise Maske (Regina De Vera) who is newly married has become bored in her sexless marriage with her demanding and uptight bureaucrat husband Theo (Eddie Kaye Thomas). Then one day at a Royal parade Louise jumps up on a bench to see the King go by, and oops, a clothing malfunction occurs.  Her bloomers come loose and fall down around her ankles, right in front of everyone. Theo is aghast and frantic with worry about losing his job and their reputation.  Suddenly the room they’ve been trying to rent now has plenty takers eager to occupy it.  Such are the benefits of fame.

The renting applicants consist of: Frank Versati (Luis Vega) a wealthy smooth-talking narcissistic poet who believes that no woman can resist him; Benjamin Cohen (Michael Bradley Cohen) is a jealous Jewish barber who never takes no as an answer; Gertrude Deuter (Joanna Glushhak) the nosy, upstairs, sex-starved neighbor, who keeps egging on Louise to have an affair channels the character traits and vocal delivery of Frau Blucher from  Mel Brooks’ film “Young Frankenstein,” a role she portrayed in the National touring production, is a hoot;  Jeff Blumenkrantz, as Klingelhoff,  and Kris Zarif as the King, complete this fine comedy romp cast.

The play’s ‘underpants incident/premise’ of 1910 is the 21st-century version of what Pop artist and celebrity writer Andy Warhol called such occurrence as having one’s “fifteen minutes of fame.”  Today’s generation calls the result of such an incident as “going viral.” The Old Globe audience finds it just the ticket for promoting and/or encouraging female empowerment and a thumbs up for the #Me Too movement thrown in for good measure.

My sense of who in the audience is getting the message that Martin, Bobbie, and the cast are sending is definitely being received and enjoyed by the distaff side by a three to one ratio.  The females got every gesture, every laugh line, while the males, at least in my sightline, sat with arms folded where an occasional smile would cross a face. Generally, very few smiles were on the faces of the older men, even while in repose.  The shock of recognition apparently must have been too much for them to endure.

To that, I say it’s just poor sportsmanship on their part.  Men have enjoyed the advantages of Patriarchy for over 10,000 years, and now they begrudge the ladies a few decades to shine and enjoy the sunlight of equality along with a modicum of notoriety or celebrity?   As the millennials say, “Get over it,” the world is moving on.  All aboard!

The Old Globe performing arts complex is state of the art when it comes to various technical team requirements. In the case of “The Underpants” production led by director Bobbie, it features the technical skills and talents of such Broadway stalwarts as Tony Award-winning Scenic Designer John Lee Beatty; Costume Designer Alejo Vietti; Lighting Designer Phillip S.Rosenberg, and Tony Award-winning Sound Designer Nevil Steinberg.  Erna Finci Viterbi Artistic Director Barry Edelstein is a magician when it comes to gathering the best and brightest for his season of plays at The Old Globe Theatre complex.  And, No New York, you can’t have him back.  By popular demand, he stays in California.

“The Underpants” is a funny, entertaining, and crowd-pleasing production. It’s been extended twice and now runs through September 8, 2019. It’s a must-see production.