Singing Along with David Bizic, Tamara Wilson, and Saimir Pirgu 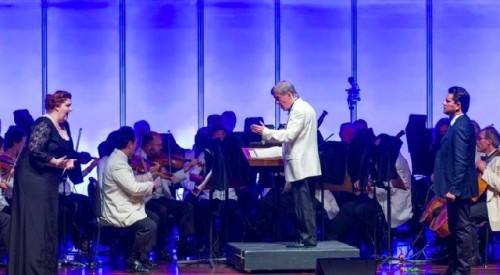 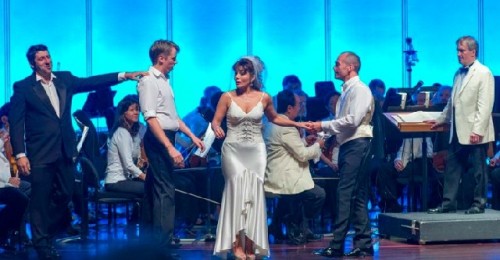 Bizic, Michie, Perez and the Don. Of course, Leporello leads Masseto away from his wife! 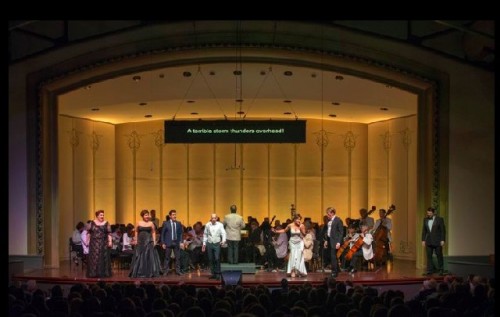 Much Mozart is Made of Little Space in the Martin Theatre 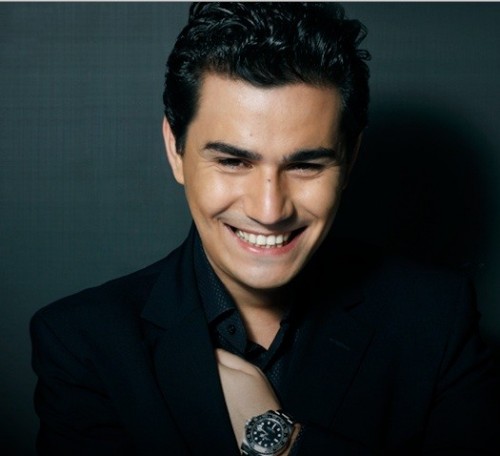 Saimir Pirgu, IT tenor who delivers all the goods.

David BiziÄ‡ bursts onto the stage of the Martin Theatre at Ravinia and captivates with his sweet, confused Leporello. A consummate singing actor, he is twisted and turned by his depraved master, Don Giovanni.  We want to deflect him as he goes to choose another at the end of the opera. This guy is too good to be a servant.

Saimir Pirgu, an Albanian tenor, debuted under Conlon with Woody Allen (!) directing. His infectious smile withers as Don Octavio tries to save his beloved.  All our attention focuses on his beautiful clear voice, which is highlighted by a penetrating edge.   He could be an IT tenor—surpassing others who have his good looks but not his marvelous voice. Earlier this year in Traviata at the Metropolitan Opera he was enchanting, and did not get sufficient credit as Diana Damrau surprised in the role of Violetta.

In an interview Pirgu probably speaks for all singers who work with Conlon.   “We don’t just work together, we are friends. We meet each other in Italy, Vienna, and L.A….He knows me very well. He likes voices and I’m happy to work with people who really like beautiful voices. â€¨â€¨He is one of the conductors such as James Levine and Riccardo Muti, they are the generation who had the opportunities to work with the great singers. They worked with everybody. Everything they say helps you. â€¨â€¨When I work with Conlon, everything he suggests makes me better. He doesn’t make things more difficult. He’s a wonderful conductor but he’s a really good man. I’m very happy. When I’m here, I’m home.”

Kristinn Sigmundsson commanded as the Commendatore, his face full of good humor sobered down by the gravity of his role.  Intoning authoritatively in a fearful symmetry he mastered the vocal and dramatic demands of the role.

Jonathan Michie played Masetto to the hilt, getting us to the edge of our seats as we try to prevent him from succumbing to the Don and Leporello. He is right to protect his new bride, who the Don would like to initiate before he does. Ailyn Perez is tarted up as Zerlina.  It is easy to see why the Don wants her in spiked, platform heels and an active avoir du pois.

When Christopher Maltman played Billy Budd in Seattle, he was hung from the stage ceiling. As he twirled around and faced back, away from the audience and toward the chorus, he stuck out his tongue at them.   His is an unusually broad interpretation of the Don. No elegance here. Only a crude lust for the manipulation of as many women as possible.  He is funny indeed, but since Leporello is supposed to be the story’s clown, and the opera itself is camp, we get camp squared. A little more elegance might have worked better.

Tamara Wilson defies description. She was able to modify her naturally huge, comfortable and beautiful voice to serve Mozart’s purposes. You sense that like Jamie Barton she can do anything.

At first you wonder what the terms of Ravinia’s contracts are. Performance after performance in the opera concerts and semi-stagings we get luxury casting, first rate, world class singers across the board. This is the magic of a conductor and music director who singers love. And why not? Up close in an 850 seat theatre, you could see Conlon sing the entire opera, helping the singers as a live prompter and nearby encourager. Too bad the Metropolitan Opera did not catch him when they could.   It is hard to imagine the mess the Met is in now if he had been at the helm.

The CSO has such a good time when they take adventuresome routes down the opera path. One violin was red-faced with laughter. The concertmaster practically fell off his seat giving his all as he tapped the irresistible Mozart rhythms.

Miah Im on the harpsichord clearly entranced the conductor, and sat ramrod straight but rapt in a flowing white shirt when she was not accompanying a voice and character.

David Lefkowich directed, and made use of every opportunity to engage in a concert/semi-staged production. Particularly arresting were scenes in which the singer was almost in the wings and the characters on the stage moved to her music, acting out the drama before us to the beat of another’s voice.

Good opera directing, and this certainly was, has performers move to the music. Lefkowich does much more than this by the placement of the chorus stage right, the engagement of Leporello with the conductor and orchestra when they perform at the Don’s Last Supper, and countless others moments to treasure.

Conlon would have liked to have the same singers perform in The Marriage of Figaro, offered following Don Giovanni, but the vocal demands of the roles made this impossible in back to back performances. What we will be able to see clearly is how these operas are related. Another layer of pleasure to the Conlon presentations at Ravinia.