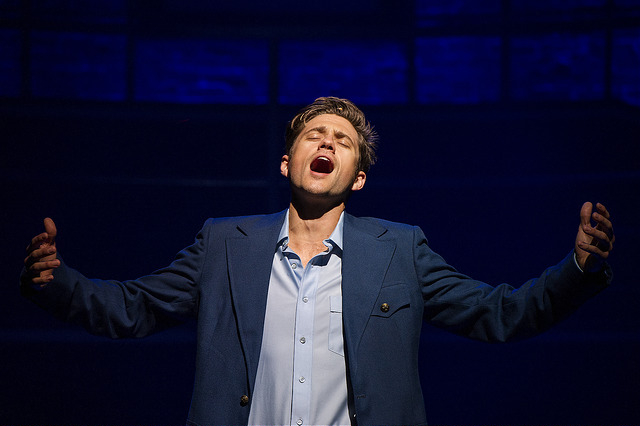 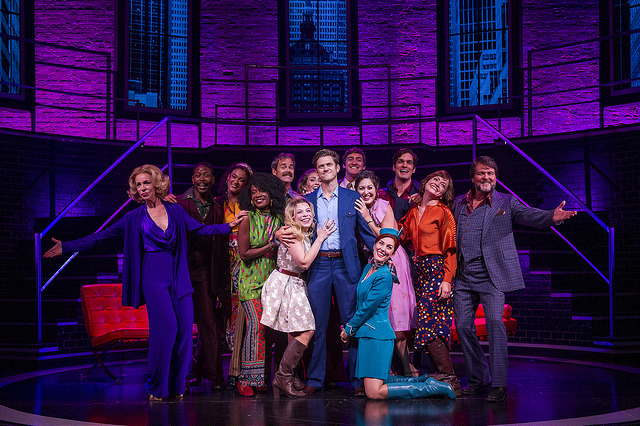 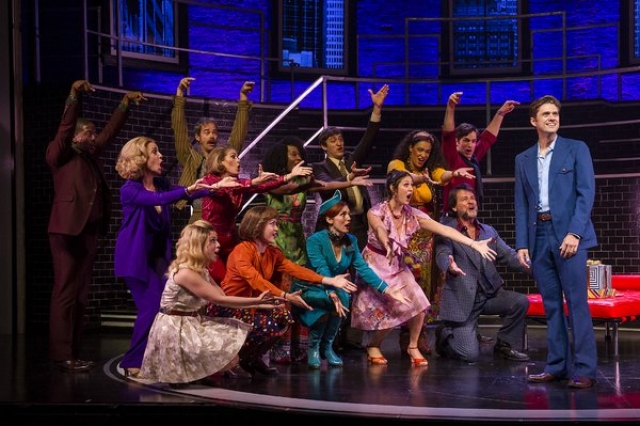 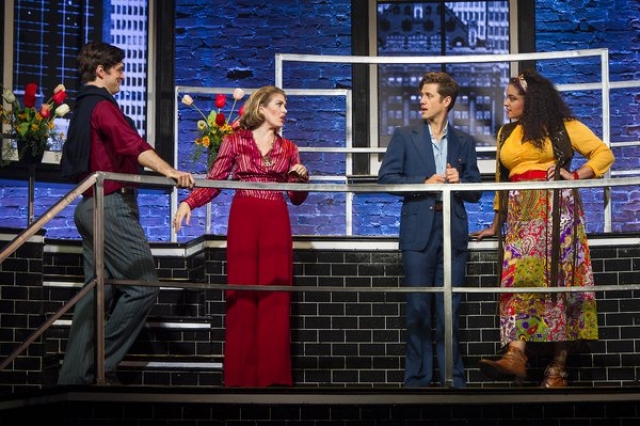 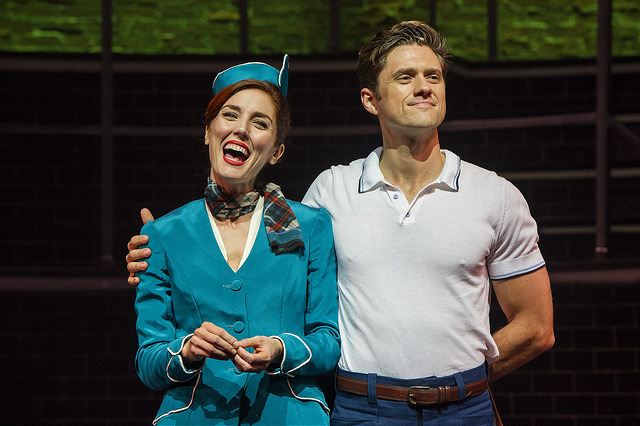 Coffee tea or me. 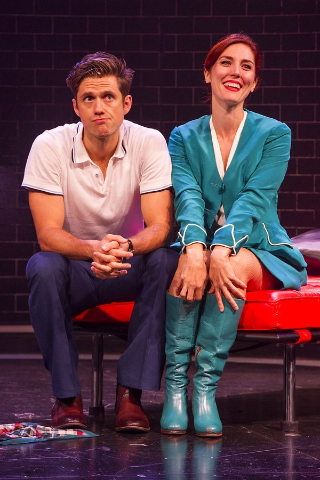 In the morning it's off to Barcelona. 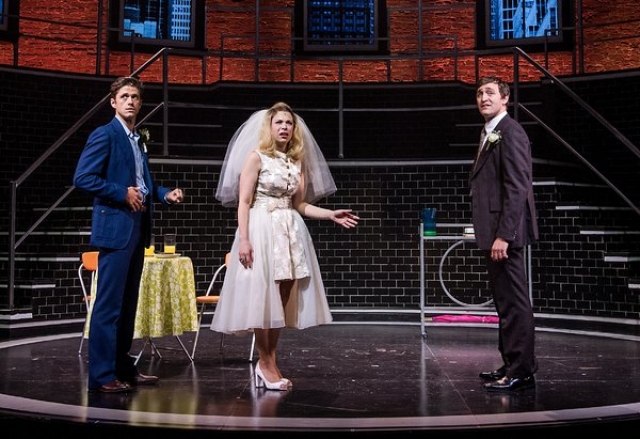 Stephen Sondheim, now 87, was 40 when his 7th play Company was produced on Broadway in 1970. It was nominated for 14 Tony Awards and won six including Best Musical. There was the earlier, 1957 collaboration with Leonard Bernstein, on the iconic West Side Story. Gypsy with Jule Stein in 1958 and his own A Funny Thing Happened on the Way to the Forum in 1962.

It was Company, however, that established him as the toast of Broadway.

Some 17 years ago when Barrington  Stage was a startup in Sheffield founding artistic director, Julianne Boyd, first produced Company. Her theatre company was intended to be launched in Great Barrington hence the naming mishegos.

This season Boyd has taken another crack at Company and critics appear to be unanimous that a sensational production is on the short list of her best work. Boyd is noted for loving musicals and this one is a corker.

Much of that is owed to the serendipity of casting Aaron Tveit as a truly charismatic, charming, sexy and all around fabulous Bobby. He is the now 35-year-old swinging bachelor who just can’t take the plunge into marriage. The character  charmngly  hovers on the cusp of maturity.

The couples who adore him take turns inviting him to threesomes. These vignettes, that drag on for an hour and twenty minutes in the first act, range from smoking pot, binge drinking, attempted seductions from a woman of a certain age, and a reluctant bride hilariously throwing herself at Bobby while the  groom Paul (Joseph Spieldenner) marks time. As the reluctant bride Amy (Lauren Marcus) brings the house down with her hilarious, sprawling and bawling "Getting Married Today." It is the comic highpoint of an amusing evening.

There are three women he dates and at times he can’t keep his stories straight. The morning after he calls April by the name June. He can’t get the calendar or women straight.  It’s a problem married male friends, and those in the audience, appear to envy.

As with primo Sondheim there is a message in the medium.

The svelte, modernist design of Kristen Robinson, and costumes  by Sara Jean Tosetti have signifiers of the 1970s but in its essentials this is a timeless musical. Its core concepts and issues are as fresh as when they originally ran the table on Broadway.

There are many delicious design details. In the sleek, cool apartment that Bobby just appears to sleep in, with or without company, there is a Barcelona chair and minimalist couch inspired by Mies van de Rohe. The shock is seeing it in bright red leather rather than the traditional, formalist black. The reference is classicism with a twist. There is also the curved shell of the space and chrome railing leading to an upper level. Boyd’s staging takes full advantage of the design.

The characters shuffle about with soft shoe choreography by Jeffrey Page. It is easy and fluid with no heavy lifting. This is more a song than dance musical.

The costumes were fun with Bobby in sleek, bachelor chic. The outfit of a stewardess (that’s what they were called back then) was particularly nifty. Where did they find those green boots that perfectly matched April’s outfit topped with a period, designer cap? She was delicious to look at if a bit ditzy and dumb. The bedroom farce with April (Mara Davi) was hilarious and fun. In the morning she has to fly off to “Barcelona.”

Back then it was fun to fly. Nowadays, flight attendants are middle aged and toss us pretzels and a few peanuts. In that sense April is a sad anachronism. She represents the era of the mile high club.

All fourteen actors had magnificent voices. The show stopper (originated by Elaine Stritch) was “Ladies Who Lunch.” It was executed with commanding presence by the magnificent Ellen Harvey. The three times divorced woman of a certain age puts a move on Bobby that is deftly and kindly deflected. Stumbling back on this interlude, her patient and long suffering husband Larry (Peter Reardon) tears our hearts out with reasons why he remains in the marriage.

Bobby is emotionally battered by his friends and their versions of  aspects of relationships. One seemingly happy couple is contemplating divorce. A husband proposes sex with Bobby. In another evening the host struggles to remain sober and his wife can’t resist calories.

The three women he dates represent aspects of no. The sensible one Kathy (Rebecca Kuznick) seems like the best bet but when he finally pops the question she is engaged and about to leave town. As Marta (Nora Schell), a strong voiced woman  of color, through the evocative “Another Hundred People” describes how by train, plane and automobile there is a constant influx to the naked city. Some, like Kathy, eventually leave.

By the end of the evening (a fifty minute, faster paced second act) as is typical of Sondheim there is no resolution or happy ending. Yet again Bobby fails to get his wish by attempting to blow out the candles on the birthday cake.

We don’t know if ‘Bobby, Bobby, Bobby’ the carefree bachelor that everyone loves has learned anything.

That ambivalence is encapsulated by the rowsing ensemble of "Side by Side by Side." It's the essence of why three's company.

There were chills and goose bumps all over me when Bobby belted out that final solo “Being Alive.”

Ten years ago Tveit last performed at Barrington Stage. Since then he has emerged as a star of stage and screen. He returned to the Berkshires enticed by the challenge of a great role in an iconic American musical. Get real people.