Dancing Against the Current 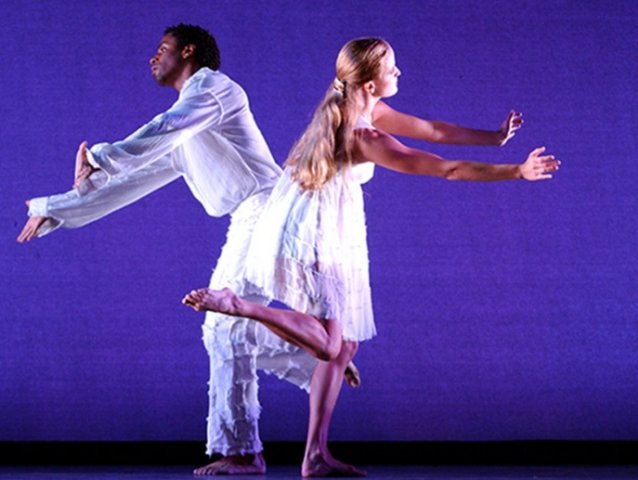 Dance is not my beat.

I have never written about ballet. I know little of jazz dance and less of modern choreography other than the occasional gyrations that punctuate the grand operas of the 19th century. However last Thursday night at Mostly Mozart I was lucky enough to attend a performance by the Mark Morris Dance Group, that was accompanied by three excellent chamber and vocal music performances.

The performance, held at the Rose Theater at Lincoln Center (located at the north end of the massive Time Warner Center in Columbus Circle) was part of a current effort by Lincoln Center to merge the staid and long-running Mostly Mozart with the effortful hipsterism of the Lincoln Center Festival, that yearly multidisciplinary event that began life as an event called Serious Fun! Press and information materials are now careful to refer to everything as MMF, a clumsy re-branding that seems to please nobody.

This performance brought together three works from different parts of Morris' career. It opened with his setting of Brahms' Liebeslieder Waltzes with a group of singers ( Jennifer Zetlan, Luthien Brackett, Thomas Cooley and Thomas Meglioranza) accompanied by piano played four hands by Colin Fowler and Amir Farid. Each song in the cycle was used as the setting for a silent story playing out on the dance surface: tales of betrayal and deception, separation and loss, and finally, of joyous reunion. His choreography made interesting use of repetition, as certain motions and gestures would repeat throughout the work.

Next on the program, an earlier piece in every sense of the word: Morris' I Don't Want to Love is a setting of seven madrigals by Claudio Monteverdi. For these performances, a second ensemble settled in the other end of the orchestra pit, with harpsichord ( Fowler) cello, lute and theorbo accompanying the two singers. These are very old works: Monteverdi is the first "name" composer whose music appears in the Western canon and they are each short and to the point.

For these songs, the dancers were clad in ritualistic white, reminiscent of Greco-Italian statuary as their silk outfits billowed and flowed about the stage. As there were no surtitles, and it was too dark in the theater to see anything but the dancers, it was difficult to ascertain a close link between  Morris' carefully plotted steps and the lyrical content of these songs, but it is safe to assume that there is one of great artistic significance.

The performance's second half was purely instrumental and a world premiere: Morris' setting of Schubert’s famous “Trout” Piano Quintet. This is one of Schubert's two major works for five instruments, using  material from his song Die Forelle as the basis for the swimming set of variations that brings it to a stirring close. Schubert's  replaces the usual cello in a piano quintet with a double bass, played by Timothy Cobb of the New York Philharmonic.  This performance featured members of the Ariel Quartet (in their Festival debut) and pianist Inon Barnitan, who also shares a strong connection with the Philharmonic.

Each of the four movements were played with little pause, with the dancers executing leaps, lifts and steps, but often as not simply running in and out of the wings. As with the earlier works, the repetition of movement told the story, with certain sophisticated moves appearing over and over with the frequency of an idée fixe. Whatever the vagaries of Morris' skilled choreography, it was met with enthusiasm by the packed house, and as he came out for a bow the audience stood up and cheered. (Reprinted by permission of Superconductor).