From Chaucer to String Theory 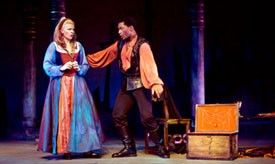 Ulla Westlund in "I Tre Compagni" 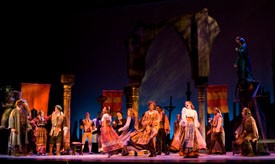 The Encompass New Opera production of "I Tre Compagni" 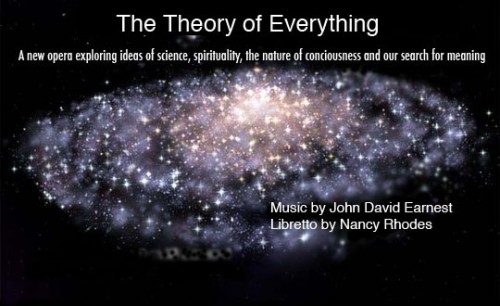 "The Theory of Everything" a new America opera

"I Tre Compagni" produced by the Encompass New Opera

One of the most vibrant companies devoted to creating and producing American opera, the Encompass New Opera Theatre, is well worth discovering.

Thirty years ago, Nancy Rhodes, an assistant director at the Roundabout Theater in New York, applied for a job directing a college production of a Gertrude Stein play.  When she arrived for an interview, she discovered the play was not a play at all, but an opera, The Mother of Us All, which chronicles the life of Susan B. Anthony.  With music by Virgil Thomson and a libretto by Stein, The Mother of Us All is inarguably one of America's greatest operas.  Although Ms. Rhodes had never directed an opera, she accepted the job and rushed off to ask Philip Campanella, the Music Director at the Roundabout, what she should do to prepare.

"Get them to commit to a music director and go see Virgil Thomson," Phil advised.  Ms. Rhodes request for a music director was promptly filled. Approaching  Virgil Thomson took courage, but shortly Ms. Rhodes had an appointment at his home at the Chelsea Hotel, notorious as an incubator of avant-garde talent such as Arthur Miller, Dylan Thomas, and today, Ethan Hawke.

Rhodes and Thomson hit it off immediately.  Sitting at his piano, Thomson began to play through the score.  To every idea she suggested for the production, Thomson replied, "Good idea. Try it."  He loved the finished production.

A young producer with whom Rhodes worked, Roger Cunningham, suggested they start a company for new American operas and boldly they founded Encompass.  Rhodes' mission was to commission and produce new American operas and to broaden the audience for this form, a big challenge since opera has been under seige.  Thomson became Honorary Chairman of the Board.

In 2002, Encompass successfully produced the premier of Louis Gioia's Un Racconto Fiorentino at Alice Tully Hall.  It was called a traditional opera for the 21st century.  So too was Gioia's I Tre Compagni premiered under Rhodes' attentive direction in June.

The Gioia work was Puccini-beautiful, but, interestingly, the text was based on Chaucer's The Pardoner's Tale whose subject is inordinate greed leading inevitably to disaster, felt cutting-edge contemporary.  Set in Spain in the 15th century at the end of the Muslim reign -- when Catholics, Jews and Muslims lived peacefully together, this is a period which has lessons for our time.

At first I wondered where the Pardoner was. Nowhere to be seen on stage.  I then realized that the composer was the Pardoner -  telling this tale.  A story about three friends who betray each other out of excess greed is familiar as we suffer from subprime mortage failures and the Ponzi scheme of Bernard Madoff.

The performance was enhanced by engaging sets and costumes, but clearly singing was the fous.  The tenor Noah Stewart reached his high C's comfortably.  The soprano, Ulla Westlund, a Swede by birth, comes to us in the tradition of the great Scandanavian sopranos singing today - Karita Mattila and Katarina Dalayman.  But is was Shannon DeVine, a gifted baritone with a rich, haunting voice, that shone.

This fall we can eagerly look forward to the first reading of an Encompass new opera, The Theory of Everything.  Rhodes has written the libretto exploring "ideas of science, sprituality and the nature of consciousness" and string theory no less.  The score is being composed by John David Earnest.  It promises to be lively, provocative and innovative in the Encompass tradition.

Toward the end of his life,  Thomson was riding in a car with Rhodes, and said, "I am passing the mantle of American opera on to you." He had an eye for talent!