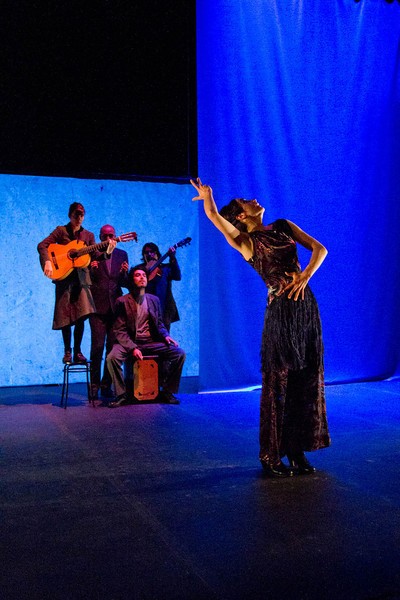 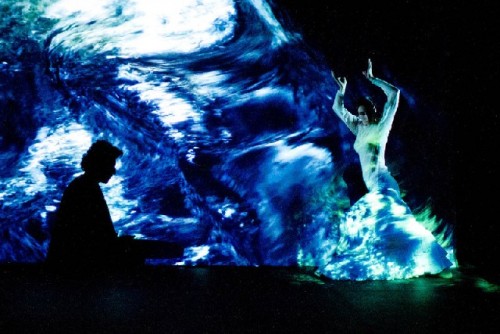 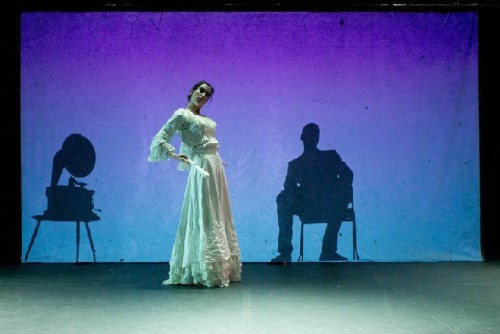 Set to music by Jacques Brel. 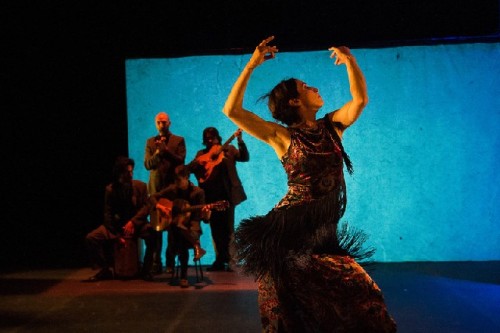 Flamenco in all of its aspects. Christopher Duggan photos courtesy of Jacob’s Pillow. 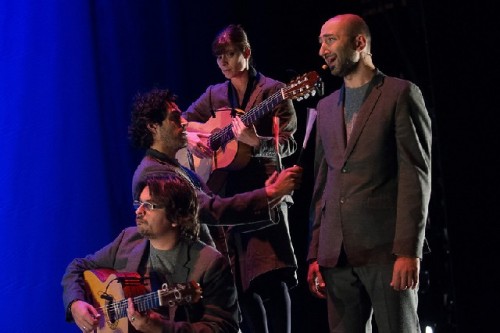 There is a long pause as we view the rear of a seated Myriam Allard the solo dancer and co-artistic director of La Otra Orilla, a Montreal based, flamenco inspired company having its U.S. premiere at Jacob’s Pillow through August 18.

The man, Miguel Media, standing to the side touching her shoulder departs behind a scrim which silhouettes two guitarists, Caroline Plante and Jose Vega, as well as the baritone singer and co-artistic director, Hedi Graja. Medina takes his place as percussionist.

The guitars begin softly and melodically. In front of the dancer there is a video projection of the ticking gears of a clock. She whirls her arms in sweeping circles and also bends them to simulate the positions of the arms of a clock.

Aspects of 12 thread through the piece E/12 (el doce) as indicators of the 12 beats of flamenco, the twelve hours of a clock, or the twelve months of a year. This is conveyed in a number of segments including a video projection and dance indicating the notion of time and tide. There is also a young girl playing Hop Scotch with its arrangement of twelve squares.

Gradually Allard gets up from the chair and with the clock projections behind her, attired in tight black pants and top, we see and hear the traditional floor clicking movements of classical flamenco.

There is an anticipation of the unleashing of passion, complex footwork, and the abrupt turns and shouts of ole that are to Spanish dance what the movements of the matador are to the bull ring.

Often the energy and passion of flamenco derives from the sexual tension of a couple, in this case absent a male partner. With traditional flamenco there is also an element of spontaneity as the singers and guitarists, often accented by hand clapping, dig ever deeper for inspiration and improvisation. During a great evening of flamenco the heat and energy is palpable.

What we saw with this company was interesting, inventive and often inspiring. There was, however, less spontaneity and improvisation. The company presented a theatrical, narrative piece. The movement and music is composed and arranged to convey a series of vignettes conflating the theme of aspects of the passage of time and tide

Surprisingly, all of the members of the company- three musicians and a singer- were choreographed. We rarely see musicians as part of a dance. In a classical flamenco performance they remain in the background. Here they were fully staged and an integral part of the work combined with an evocative use of video.

During an interval during which Allard was absent from the stage the three men emmitted uniquely gutteral patterns of sound. An abstract circle video pulsed in the background. This evolved to a passionate song from Graja with the two men and their sounds as a percussive accompaniment.

While the choreography and the musical score composed by Plante were experimental, for the most part, the music and singing were rooted in flamenco tradition. Their overall musicianship and command of the genre were superb.

It is most unusual to encounter a female flamenco guitarist. It is the norm with the greatest players to feel the duende and testosterone. Flamenco music and dance has its roots in the Islamic conquest and culture that prevailed in Spain until the Christian triumph and subsequent diaspora under Ferdinand and Isabella in 1492.

Prior to 1492 Moors, Christians and Jews coexisted with mutual inspiration. Forced to covert to Christianity or leave Spain the flamenco tradition is a signifier of the Islamic and Jewish roots in the culture particularly in the region of Andalusia.

To remain in Spain Islamic and Jewish communities became conversos. In a sense, Allard and Graja are conversos who lived for several years in Spain studying with the masters. Graja studied classical music in France. He learned flamenco during several years in Spain by absorbing the influence of the great cantaores. He has mastered the wavering vibrato inflections and pulsing beat of the Arab/ Jewish tradition.

While flamenco is performed all over the world it is an indigenous folk form. It’s what one encounters in a bar late at night when the inspiration moves patrons to sing and dance. Flamenco is to Spain what tango is to Argentina. American audiences have come to know it as a professional art form. We are used to the image of skilled performers with sharp and precise movements.

There is, however, another flamenco when you experience an older couple slowed by age but conveying the deepest feelings. Like country blues it can punch you in the gut and bring tears to your eyes.

We are grateful for this experience with a very interesting company bringing a new life to traditional forms. For me, however, the performance was more about parts than a whole.

There were stunning elements. With bare feet Allard performed as the ocean/ tide in a dress with a long train. In traditional flamenco the women have precise moves to kick and maneuver these trains alternating with heel clicking.  She focused entirely on the manipulation of the skirt stretching out into long angular poses accenting the horizon line of the pulsing video of waves projected behind her.

I wondered how Jacques Brel got into the mix. This was set up with a silhouette of an old fashioned, wind up victrola and a scratchy 78 rpm disc of Brel. She wore a circa 1900s gown with a fan, which, when opened, released a cloud of dust.

The Hop Scotch sequence played on the all important notion of 12. But it is was jarring, like the non sequitur Brel, to see the ersatz young girl inserted into an evening of flamenco.

There were several such leaps of  imagination.

It is best to come to this company setting aside all prior assumptions about traditional flamenco. That puts us in a better frame of mind to comment less on what it is not and focus more on accepting fresh and different interpretations.

We will look forward to seeing where this company takes us.