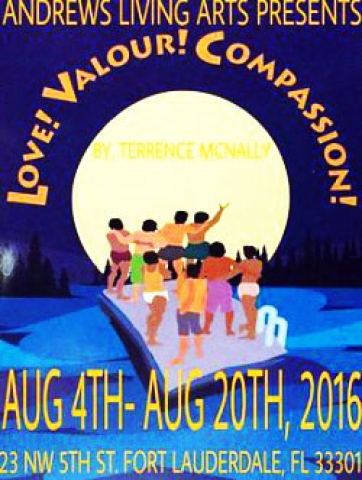 Real tears stream down the pained face of actor Jason Fazio during a top-notch production of the heartbreaking and hilarious Terrence McNally play “Love! Valour! Compassion!”

In the tiny Ft. Lauderdale theater Andrews Living Arts Studio, where McNally’s Tony-Award-winning play about eight gay men is on-stage through Sunday.  The lighting (the mood-enhancing design which provides focus but features a few late cues is uncredited in the program) zeros in on the tears shed by Fazio as Bobby Brahms. He’s a young, gay, blind man who seems constantly content and happy despite his disability.

Up until the point in the play when Bobby breaks down, revealing a vulnerability and sensitivity beneath his serene, charming, happy, take-it-in-stride exterior, we’d never imagine he’s capable of tears. Fazio transitions seamlessly from that happy, laid back, innnocent soul to a man who heartbreakingly breaks down in front of us.

The production features such convincingly multi-faceted, nuanced performances from the entire cast and mostly high-quality production values from the technical team.

The costumes (no costume designer is listed in the program) are colorful and varied, reinforcing the many emotions and shades the characters impart throughout the play.

Jerry Jensen’s sensitive direction finds the humor in the play while giving equal weight to the pathos. Under Jensen’s guidance, the actors never veer too far into stereotype or sentimentality. They display deft chemistry with each other, convincing us each couple have been lovers for a long time.

Carlo Sabusap’s sound design includes realistic-sounding thunder, aided by lights blinking during a storm to indicate lightning. The dreary weather in the last act symbolizes the dark days ahead for the characters who are stricken with AIDS – and will most likely lose close friends to the disease.

“Love! Valour! Compassion!” is a character-driven, relatable, touching and terribly timely work with just a smidgen of sentimentality. The play, which will cause you to laugh one moment and cry the next, a la Neil Simon, vividly captures the fears, hopes, heartbreaks, tension and pride of a group of eight gay men in the summer of 1995.

“I just don’t want to be dead and forgotten in my own lifetime,” one character states, a line that helps give the play a Chekovian-like quality.

Each act takes place in a country lakehouse belonging to Gregory Mitchell, their former choreographer and his lover, Bobby. (The house, located two hours from New York City, is designed cozily, sparsely and yet with detail by Bob Nation). The play takes place over the course of three summer holiday weekends: Memorial Day, The Fourth of July and Labor Day. Each act is set during one of those weekends, in the aforementioned order.

The specter of memorial services for themselves and their friends hovers over them like the dark clouds that dominate the sky through much of the play. More than one character has AIDS and is near death.

The still-present threat of AIDS isn’t the only factor making “Love! Valour! Compassion!” a play that demands productions.

Theater can “provide a forum for the ideas and feelings that can lead a society to decide to heal and change itself,” he said in an address to members of the Broadway League.

Change can’t come fast enough for “Love! Valour! Compassion’s!” characters, who bemoan the hatred of gays in 1995 and the devestation brought upon them by AIDS.

Throughout the play, they argue, make love, provoke each other, tease one another as well as laugh and cry together. They have their good and bad moments, ups and downs, needs, desires and dreams like everybody else, McNally is trying to say. He wants us to spend time with these individuals, get to know them well and care about them.

The playwright keeps us in their company for a lengthy time (the three-act play is performed with three intermissions), allowing a bond to form between us and the characters. Despite their eccentricities, they become as sympathetic to us as the characters in “Rent” have become endeared to so many. Our close connection with McNally’s characters in “Love! Valour! Compassion!” partly results from the intimacy of Andrews Living Arts Studio’s roughly four-row theater.

We feel deeply for Fazio’s Bobby, who won’t let his blindness get him down. He invests his almost perpetually smiling, charming Bobby with a serene, indomitable and independent spirit who refuses to be pitied -- or even assisted by a helping hand.

“Whoever says life is fair, it certainly wasn’t a blind person,” Fazio’s Bobby says in a content, even joyful sounding voice.

Gregory, who sometimes addresses the audience (as do other characters), has an urgency to tell his story and struggles valiantly through his stutturing problem to relate the tale.

In the role, Richard Weinstock captures that urgency. He’s equally effective as a charming, enthusiastic storyteller and as an angry, emotionally-injured individual. His eyes and voice blaze with emotional intensity during darker moments.

Brett Watts gives a stellar performance, doubling as lonely British composer John Jeckyll and his twin brother, James. Watts endows John with a melancholy, low-key, bordering on apathetic air. But it’s also a performance often tinged with an understated, darkly seductive flavor. Watts contrasts that with a wide-eyed flamboyance and charm as his AIDS-stricken brother, James.

John’s darkness is also contrasted by the exuberance in Rosseroni Parris’ Buzz Hauser, a musical theater loving, hyper young man. Parris is particularly effective at hitting high notes, sounding like a soaring soprano when singing or speaking in a high-pitched, silly, sing-songy voice about musical theater.

Brayan Betancourt conveys an unabashedly seductive aura as the moody Ramone Fornos. The actor folds his arms in suspicion and a childish annoyance when he feels he’s not being treated right.

Some characters are more stereotypically gay than others, and the actors unapologetically play them as such. That’s not the case with Ted Dvoracek’s Perry Sellars. With his beard and jeans, he imbues Perry with a blue collar, rough around the edges aura that doesn’t bring to mind a stereotypical homosexual male.

Dvoracek’s portrayal can help debunk that stereotype, helping folks view gay individuals as people like everybody else.

In his director’s note in the program, Jensen mentions that South Florida hasn’t seen a production of “Love! Valour! Compassion!” since 1997.

You don’t have to look beyond the title to realize that a production here, and anywhere else the play hasn’t been staged in a while, is long overdue.

“It’s the state of America that should get you upset,” one character says to another.

If that line doesn’t immediately remind you of the play’s resonance to today, nothing will.