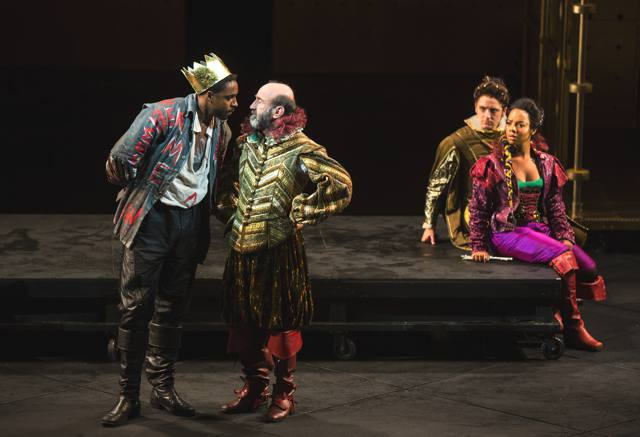 (from left) Grantham Coleman as Hamlet Patrick Kerr as Polonius, Kevin Hafso-Koppman as Rosencrantz, and Nora Carroll as Guildenstern Photos by Jim Cox 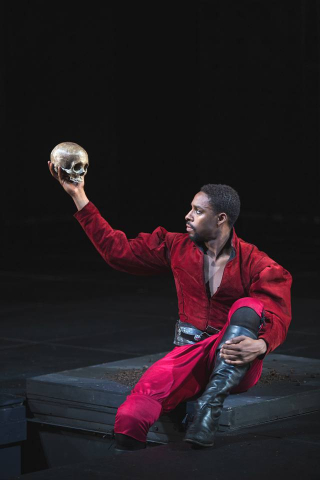 Grantham Coleman in the title role of Hamlet-Photo Jim Cox 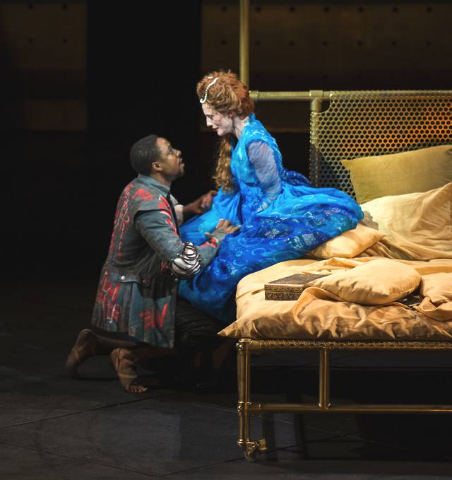 Hamlet has to be the most ‘traveled’ character in all of theatrical performed history. Its been around for over 400 hundred years and still has the power to draw actors and audiences together in celebration of Shakespeare’s, arguably, most fascinating and enigmatic character.

The richness and poetry of Shakespeare’s text in spinning a multifaceted tale of tragedy, revenge, duplicity, and death are the elements that have seduced actors as well as audiences around the world. And its been performed in all languages.

“Hamlet” once again graces the Lowell Davies Outdoor Festival stage as part of the Old Globe’s Summer Shakespeare Festival. The ‘melancholy Dane’ and his travails is crisply directed by the Old Globe’s Erna Finci Viterbi artistic director Barry Edelstein, who caps off another winning season of plays and musicals selected and produced under his stewardship.

This “Hamlet” production boasts a cast of twenty talented, dedicated and committed performers, who despite a slight technical glitch as the play began on opening night, then settled in, found its light-comedy, as well as, its drama footings and delivered solid and nuanced performances by all.

Edelstein’s personal vision for this production sees the characters, not as British or American accented performers, but as ‘people’ speaking as characters caught up in the time period of the play. His decision to eschew accents is a bit of a boon for American audience ears, in that most are not finely tuned to the sounds of Shakespearean iambic pentameter dialogue. The cast of Old Globe-trained classic actors, however, nicely bridge the accent gaps that other theatre productions employed, and this standard American/English speaking version of “Hamlet” is all the better for it.

Twenty performers on stage can be a challenge for directors, scenic, and lighting designers. However, the creative talent of Scenic Designer Tim Mackabee (who brilliantly designed the world premiere production of “Robin Hood”, currently playing in the Globe’s Sheryl and Harvey White venue), gives the actors a generous space staging area for the Castle battlements, for banquets, for the-play-within-the play requirements, for duels, all accomplished with clever platforms and different levels. Lighting director Stephen Strawbridge insures that we will able to see the gorgeous costumes designed by Cait O’Connor with his mood-inducing lighting plot.

The story of “Hamlet” deals with a young Danish Prince who is summoned home to Denmark from school in Germany to attend his father’s funeral. He is shocked to learn that his mother Queen Gertrude, has already remarried. The Queen is now wed to Hamlet’s uncle Claudius, the dead King’s brother. Hamlet is disgusted by the marriage calling it ‘foul incest’.

When a ghost-like apparition of Hamlet’s father appears to Hamlet and his friend Horatio, Hamlet is told by the spirit that Claudius, his brother, murdered him by pouring poison into his ear; stealing his life, his kingdom, and his wife. The ghost tells Hamlet that he must avenge his murder.

The revenge plan that Hamlet hatches will impact all those around him. His mother, his step-father Claudius, Ophelia his love interest, his friends, and his sanity. There is always a price to pay, however, when the revenge is fueled by hate, which in turn, drives hasty and ill thought-out decisions. Shakespeare did not call his play the “Tragedy of Hamlet” for nothing. As we watch in awe the machinations of the characters, one gets to step back for a moment to appreciate how sublime is the playwright’s construction and how meaty the roles that are available in Shakespeare’s masterpiece. It’s also a treasure trove of quotable sayings that are still in use in everyday 21st century life.

The upside to some of the downside text, however, lies in the performances of the players. Some purists may be disappointed with director Edelstein’s decision to embrace diversity in the casting of actors of color. But stories of yesteryear, even when it comes to the Bard, have been known to break with tradition. Hamlet, for example, has been played by many women over the years. Diane Venora, in 1983 performed as Hamlet in New York’s famous “Public Theatre” venue run by Joe Papp.

Last year the great British actress Dame Glenda Jackson, at 80 years of age, took on the herculean role of King Lear, and received stellar reviews in the process. But then, Dame Glenda, is a wonder. In Shakespeare’s day all the women’s parts were played by men. It was English theatre law. We’re now in the 21st century. Just as the English language is constantly evolving, so too is the manner and fashion of how we stage and mount our productions. “Hamilton”, the 2017 Tony Winning musical is a case in point as to diversity casting and its acceptance by audiences who have seen and raved about the show.

The company of players assembled by director Edelstein is first rate, and the performance of Hamlet played by rising star Grantham Coleman is an actor to watch. He is handsome, has charisma, on stage presence and power and is blessed with an abundance of talent that Noel Coward called ‘star quality’. His range runs the gamut from the giddy to a controlled, almost reckless madness in his scenes with Claudius, Gertrude, and Ophelia. It’s riveting stuff to watch.

Complementing Coleman’s performance in this “Hamlet” production, is the potent performance of Cornell Womack as King Claudius. It’s a tough, under-appreciated, role by the audience, and he does it without going over the top. Womack neatly threads that tiny needle opening with style and assurance. Opal Alladin as Queen Gertrude, a mother who serves two masters: her son Hamlet, and her own earthly ambitions makes the most of her family situation until fate steps in.

Solid support comes from Michael Genet as The Ghost of Hamlet’s father, the role of the Player King and as the gravedigger. All three portrayals are stellar winning performances. Talley Beth Gale’s Ophelia, is properly youthful in act one and her meltdown into madness in act two is strangely compelling to watch. Patrick Kerr’s Polonius is weasel-like and whinny, but he gets to utter some of Shakespeare’s best quoted lines, like the advice “… Neither a borrower nor a lender be…” that he gives to his son Laertes who is planning a trip to Paris. Laertes, in act two is fiercely played by Jonny Orsini, as a man on a revenge mission. Horatio, Hamlet’s loyal friend, also is nicely played by Lorenzo Landini.

The ensemble actors who portray multiple characters also are always in their on stage moments. Kudos to stage manager Pamela Salling and her crew who keep the on stage and back stage personnel on their cues and on their toes. There’s a lot going on behind the scenes, in order to make everything seamlessly flow for the audience.

“Hamlet” is a potently acted production that will win over audiences if embraced by Old Globe audiences who may still be yearning for the good old days of the twentieth century. But, times and theatre productions and their styles; they are a ‘changin’. We all need to get on board.

“Hamlet” now performing in the Lowell Davies Outdoor Festival Theatre is an impressive and entertaining evening of theatre that runs through September 10, 2017.