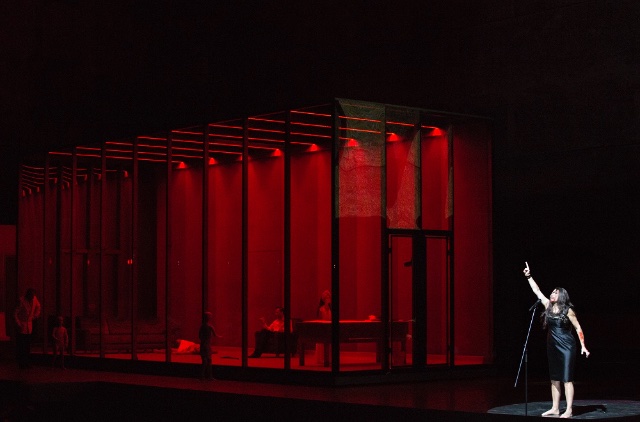 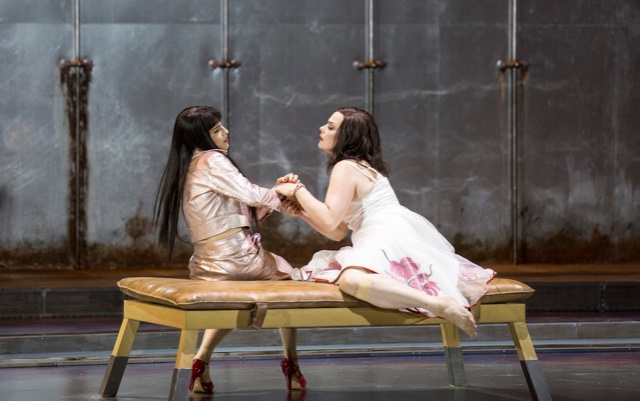 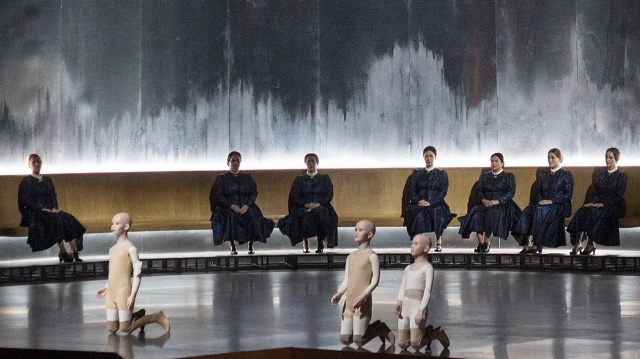 The Doppelgänger Children Backed by Chorus 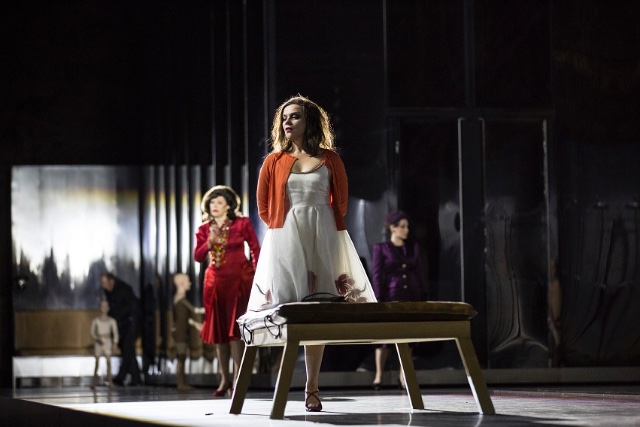 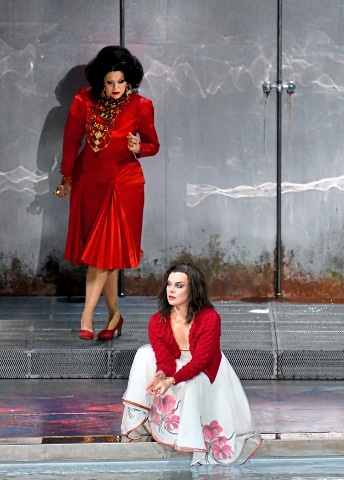 The Mother Looms for the Last Time 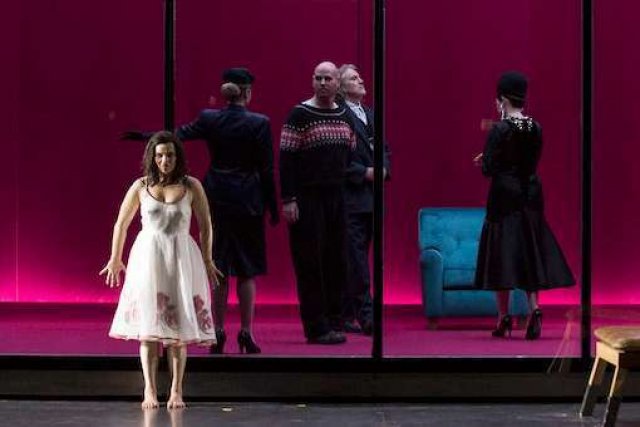 Krzysztof Warlikowski’s Elektra opens the 2020 Salzburg Festival. An electrifying interpretation of the wild Richard Strauss opera based on the drama by Hans Hofmannsthal announced that Austria is alive and well.

This opera is the beginning of a beautiful friendship for our listening ears.  Both composer and librettist are skilled dramatists. Both have a sense of fun even in the darkest times. Strauss had seen Max Reinhardt’s mounting of the Hofmannsthal play Elektra, and approached the dramatist.  It was the right moment for Hofmannsthal who had become disenchanted with words as a way of creating drama. Dance and gesture now interested him. The possibility of merging them with music offered a new way to drive drama.

Strauss needed to cut the dialogue between Elektra and her mother. This production does not restore them, but it reimagines the seminal conflict in gesture. In the final recognition scene, Strauss cut three-quarters of the lines, but extended the scene to provide for musical reactions to the moment.  The entire opera is now encased in the outside world, with the final scene a whirl of increasingly dense black objects crowding the backdrop.  Instead of an opera about an hysterical woman, this is now an opera about a crazy world disorienting humans.

Warlikowski comes from the world of theater.  He regards opera as a boxed in form.  Its perimeters must be constantly pressed to create a theatrical event. The Salzburg mounting offers an opportunity to press.  Warlikowski may not restore the push and pull of Elektra’s confrontation with her mother.  He does restore the images of their conflicted feelings for each other, even as the daughter suggests her mother must die.

All elements of the production conspire to both concentrate the conflict and explode its emotional impact. Three strong women are featured. Aušrine Stundyte makes her debut on the festival stage in the title role. Contrasting are Asmik Grigorian as her sister Chrysothemis and Ariane Baumgartner as Clytemnestra. Strauss always distinguishes characters in the tones and textures of the music that accompanies them.  Here the singing voices add to the pleasures of contrast.

We are able to see behind the palace walls and become aware of the action of the royals. Elektra is focal in a courtyard embraced by a curved bench.  The central rectangular pool is filled with water.  It is both a grave and a walkway.  Water and blood.

Costumes have varying degrees of blood-red.  Clytemnestra is drenched in red.  Elektra has red flowers blooming at the edge of her skirt.  Chrysothemis strips to a bright red bra.  Only Orestes, on this return, wears a normal, muted  L.L. Bean sweater.

While some elements of the set tower high, most of the opera takes place on a horizontal plane.  Characters are on the stage walkway, promenading their stories. They etch characters who are very much musical individuals. Lighting goes from very dark, to red sheens and finally a torrent of black, crow-like figures swirling as a dance in the finale.

Warlikowski is enamored of classic Greek theater and Shakespeare.  He is true to these passions. He dwells in the heart of Shakespeare: sex and blood.

Franz Welser-Most conducted the Vienna Philharmonic. He well understands the relationship of music to story.  What was originally perceived as a cacophony of chromatic dissonance, now sounds like a tale told by 113 instruments.  If Strauss wanted to change the listening habits of his audience, Welser-Most points the music to the stage, where the agony of Elektra and the torment of the court are expressed in movement and gesture. “I penetrated to the uttermost limits of harmony,  psychological polyphony and the receptivity of modern ears,” Strauss wrote. Welser-Most pushes the music to burst.  This helps Warlikowski burst the walls of the stage.

The waltz which buried the Habsburg Empire pops up in the score,  We hear it early on, faintly, in familiar form. By the end dance, which cures Elektra and heralds a better future, its traditional form has all but disappeared.

This production is a triumph of interpretation in drama and in music.  In fact, in musical drama.