An Intervention by Mike Bartlett 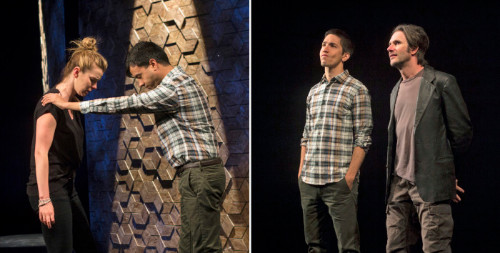 There were separate casts for the play with , left, Betty Gilpin and Debargo Sanyal, and right Justin Long and Josh Hamilton. WTF photo by Paul Fox,

For the final Nikos Stage production of the Williamstown Theatre Festival we are introduced to An Intervention, a two hander, actually a four hander with different casts, by four time Olivier Award winning playwright Mike Bartlett. The play is being given its American premiere.

Over an hour and a half of fast paced, snarky dialogue often too quick to follow, we meet friends A & B, or are they?

The trope of the somewhat engaging and totally challenging work is that it can be played by any combination of age, gender and ethnicity. It is less who the actors are as real people than an exploration of the depth and limits of platonic friendship.

At a blistering clip around the track, in varying responses from glazed over apathy to riveted attention, by the end of the drama’s surprise ending, we are left hanging.

To make the point of the interchangeability of its parts director Lila Neugebauer has presented separate casts. The performances switch between A, Josh Hamilton and B, Justin Long, or A, Betty Gilpin, and B, Debargo Sanyal.

The publicist for WTF urged critics to see both pairs. Because of a glitch a second work for the intended program Chewing Gum Dreams by Michaela Coel was cancelled because of last minute visa problems.

That allowed for programming some performances as double headers.

We opted for the single performance of Hamilton and Long. It was quite enough thank you on a day with both a matinee at WTF and an evening performance at Tanglewood. It is that time of year when critics are as down at the heels as sled dogs in the Iditarod.

About a third into the drama I was asking myself why we bothered to cover the anchor leg of an uneven WTF season. Given the many disappointments this summer there was, as Yogi would say, that sense of déjà vu all over again.

Just what the heck were they talking about?

At a machine gun staccato pace, mostly from the expressive and rather quirky/ remarkable performance of Hamilton, there was something about how B, to the shock of all their friends, supported a military invasion.

We were astonished that the actors learned and were capable of delivering that screed of verbiage with such short rehearsal time. It was in itself a remarkable feat.

It was also surprising that Long, a comedic genius, plays the straight man. It is really the inventively over the top, boozy Hamilton who intermittently grabbed our attention while this critic phased in and out of consciousness.

Eventually, I recovered from theatrical sleeping sickness and became rather interested in what was happening on stage, to some extent.

Their exchanges were so contentious, including a bit of shoving, that one wondered about the essence of why these men were friends. As Hamilton puts it they both get off on the arguing.

That resonated with my own experience of contentious friendships, some over decades, with cycles of argument, estrangement, then tentative making up followed by more flare-ups. You wonder how you get in and out of such convoluted relationships. In general breaking up with a girlfriend is final. With same sex friends that kind of closure is more elusive.

B is dating Hannah who A knows but doesn’t care for. In fact all of B’s friends advise him to dump her.

That, plus A’s escalating alcoholism, is impetus for a quasi final rift. Against the opinion of all of his friends, including his mother, B married Hannah.

That all goes south inducing them to get together one more time. The contentious meeting results in a cliff hanger finale.

What’s brilliant and very British about this play is that it so quick and clever. Updated to post modernism and the aftermath of Beckett or Pinter, this is a wordy pitter-patter play that evokes much ado about nothing from the Bard to Wilde.

Words, it is after all The King’s English, mean more to the Brits than to vulgar colonists.

For an American audience, shall we say, that verbosity is an acquired taste like our preference for coffee over tea.

But yes, I would like to see more work by Bartlett. Hats off to WTF for giving us a glimpse of what’s stirring the pot across the pond.