At Mark Taper Forum Until August 23 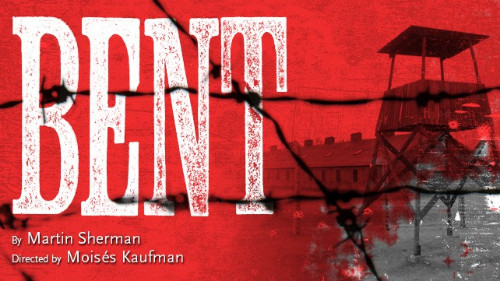 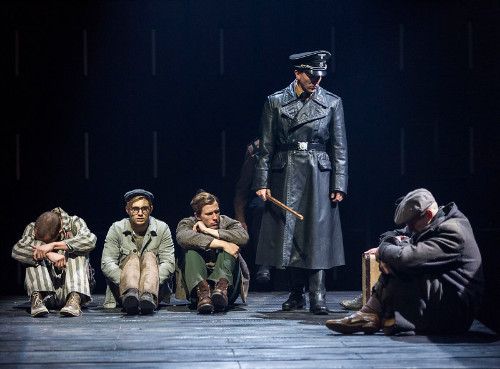 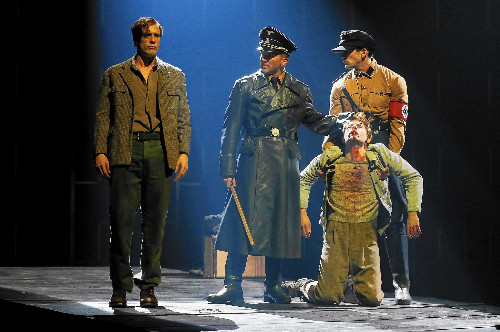 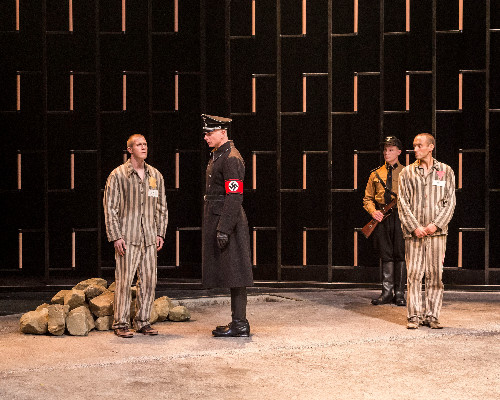 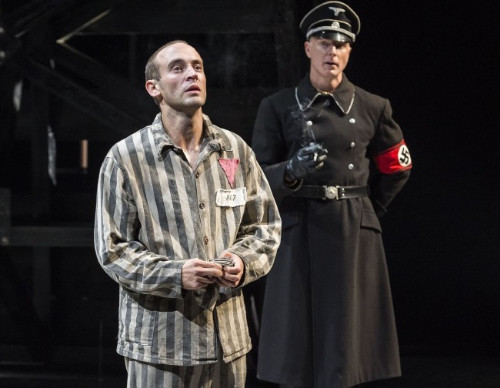 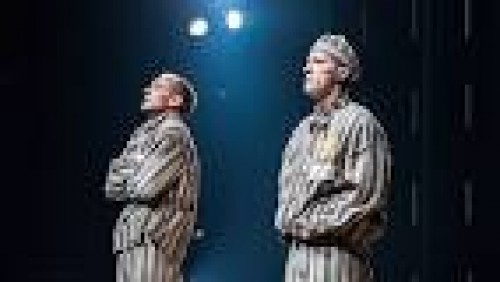 The world learned about the holocaust in 1945, but many thought the millions murdered by Hitler’s Nazi Germany was directed solely at Europe’s Jews. There were, however, other targets on the Nazi’s radar screens. The “Pink Triangle” prisoners – Europe’s gay community were also scheduled for eradication.

When playwright Martin Sherman came upon a reference to “pink triangles” in the 1976 play “As Time Goes By”, according to program notes written by American Theatre Magazine editor-in-chief Rob Weinert-Kendt, the eureka moment for Sherman was the key element in the creation of his play “Bent”, which went on to debut in London’s West End in 1979, and then on Broadway in 1980.

The endemic bombshell that the world would come to know as “aids” arrived with a vengeance in the 1980’s spawning several important plays dealing with themes and attitudes that this insidious and invidious unknown killer of gay men in particular, was capable of accomplishing what the Nazi’s could not do: kill with impunity.

The collaboration of playwright Sherman and director Moises Kaufman is the calculus that makes this revival at the Taper so powerful and compelling. “Bent” hasn’t been seen on Broadway in 35 years. In this revival the story remains roughly the same. It’s set in Berlin, between 1934 and 1936. Berlin has been a haven for Europe’s gay community for years. Although, considered as outsiders by mainstream society, gays and lesbians were safe to gather in “their nightclubs” to enjoy themselves and to mingle with straight people who occasionally visited to satisfy their curiosity.

The story centers around Max (Patrick Heusinger), a promiscuous gay man in 1930’s Berlin, who is at odds with his wealthy family because of his homosexuality. One evening, much to the resentment of his boyfriend Rudy (Andy Mientus), he brings home a handsome member of the Sturmabteilung corps. Unfortunately, it is the night that Hitler gives orders to assassinate the upper echelon of the Corps as a way of consolidating his power. Wolf, the Sturmabteilung member (Tom Berklund) is discovered and killed by SS men in Max and Rudy’s apartment, forcing them to flee Berlin.

L-R- Charlie Hofheimer, Andy Mientus and Patrick Heusinger-webMax’s Uncle Freddie (Ray Baker), who is also gay, but lives a discreet lifestyle, arranges for papers for him, but not for Rudy and Max refuses to leave his young and naïve boyfriend behind. As a result, Max and Rudy are found and arrested by the Gestapo and put on a train headed for the Dachau concentration camp.

On the train, Rudy calls out to Max as he is taken away to be beaten. Rudy is brought back and beaten to death by Max, who denies he knows him; lying to the guards that he is a Jew and not a homosexual, because he believes his chances for survival in the camp will be better if he is not assigned the pink triangle.

Once in the camp, Max makes friends with fellow prisoner Horst (Charlie Hofheimer), who wears a pink triangle, and who shows him the dignity that lies in acknowledging what one is. The two grow closer in friendship, eventually falling in love becoming lovers through their imagination and through their words without ever touching one another. Their love scene commitment to one another runs about six or seven minutes – center stage, in full lights – is absolutely stunning in its power to transform and liberate not only each other, but the audience as well. It’s a tour de force performance by two gifted and empowered actors.

To avoid spoiler alerts one will just have to attend a performance of this transformative play to see for themselves, how it ends. I will say this about the ending. When the lights went to black, the entire audience immediately stood up and applauded non-stop for about two or three minutes. In 43 years of attending Taper productions, I can’t remember such an audience-fueled standing ovation. It was a sublime moment.

“Bent” is a stellar production brilliantly overseen by director Kaufman who leads the creative team of Scenic and Costume designer Beowulf Boritt, along with Lighting Designer Justin Townsend, and Wig and Hair design by Carol F. Doran. A special kudo goes to Sound Designer Cricket S. Myers for contributions to the overall sound throughout the production which is so integral to the tone and “audio feel” of this splendid production (but I did miss hearing the high pitched whistle of European trains. But I digress).