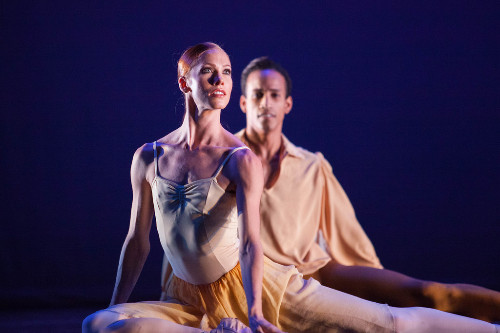 Danielle Brown and Ricardo Rhodes of The Sarasota Ballet in "The American"; photo Morah Geist 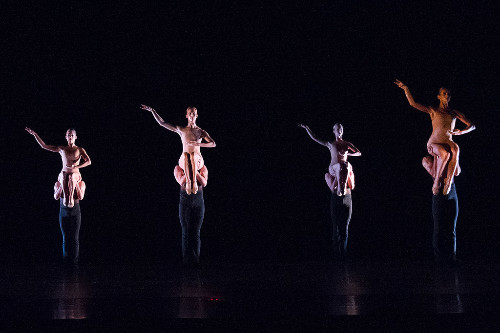 The Sarasota Ballet in "In A State of Weightlessness"; photo Christopher Duggan 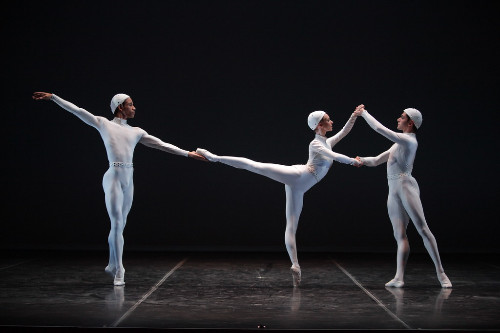 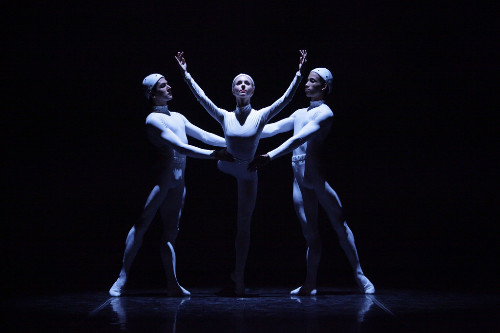 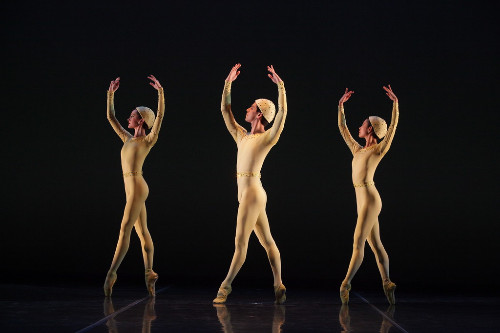 Founded in 1987 and under artistic director, Iain Webb and his wife assistant director Margaret Barbieri, since 2007 the Sarasota Ballet has steadily grown in national stature. They perform 123 ballets and are particularly known for sustaining the work of the British choreographer Sir Frederick Ashton (1904-88).

Of the three works chosen for the Jacob’s Pillow debut the centerpiece is Ashton’s slow and lyrical two part Monotones I and Monotones II.

The work of Ashton is viewed as a connecting link between traditional ballet and its evolution in the 20th century.

The three pieces represented aspects of a traditional approach to classical dance but in a manner that evokes the past and present as well as providing a glimpse into the future.

The three related but diverse works have a commonality of grace, beauty and disciplined execution.

The British choreographer, Christopher Wheeldon, won a Tony this year for his choreography of the Broadway musical An American In Paris inspired by the jazzy music of George Gershwin.

His 2001 piece for Sarasota “The American” is a reflection on aspects of Americana. It is set to a string quartet by Antonín Leopold Dvorák created while the Czech composer was a resident in the United States.

A sense of the American landscape is reflected in the lighting design of Aaron Muhl. The dancers perform in front of a background reflecting the big sky and fireball sunsets. The twelve dancers form circles of men then women as well as solo and group partnering.

The look of the ballet is traditional with the women in transparent skirts and the men in tights and blouses with flowing sleeves.

While perfectly lovely to eye and ear there wasn’t much invention in a dance that was more academic and refined than emotionally engaging.

The pace of Ashton’s Monotones I and Monotones II was subdued to a seeming standstill.

The dance is set to melancholy, introspective, moody piano music from Erik Satie. This is the French composer who was a part of the great Ballet Russe production of Parade that featured the concept of Jean Cocteau, sets by Picasso and choreography by Léonide Massine.

The two parts of the composition are performed by different sets of dancers in pas de trois combinations. The first presented a male dancer with two women and the second featured a woman with two men. The costumes and movement diminish the issue of gender. There is little or no narrative or sexual tension in a work that is about pure and sublime movement.

The zany costumes designed by Ashton had them in unitards with jeweled belts and skull caps.

Set to the exotic music of Satie, which induced a dream state, the movement was ever so slow and deliberate. At that pace every nuance was magnified and compelling. It was the dance equivalent of one of Doc Edgerton’s strobe photos that captured a bullet piercing an apple or the crown formed by an exploding drop of milk.

Slowing the dance to a snail’s pace evoked a mood of meditation and peace.

These formalist and in the case of the Ashton, minimalist works, were a nice setup for the fresh invention of the concluding work In a State of Weightlessness.

In classical ballet the male primarily showcased and enhanced the woman. He lifts and twirls her in a variation of poses that highlight her movement. The male was featured in solos that often focus on spectacular leaps.

Here, in a remarkably avant-garde manner conflating the serial music of Philp Glass and the inventive dance of Ricardo Graziano, the male, a Ninja in black, is intended to disappear. We are invited not to observe the men as they lift and support the women, attired in flesh colored, nude costumes, as they float in space.

The dance evoked a circus of high wire acrobats. We marveled at the angles and forms that were created with every possible variation on lifts.

This dance was all about the women with the men in supporting roles.

That’s how it was then and so why not now. How delicious.