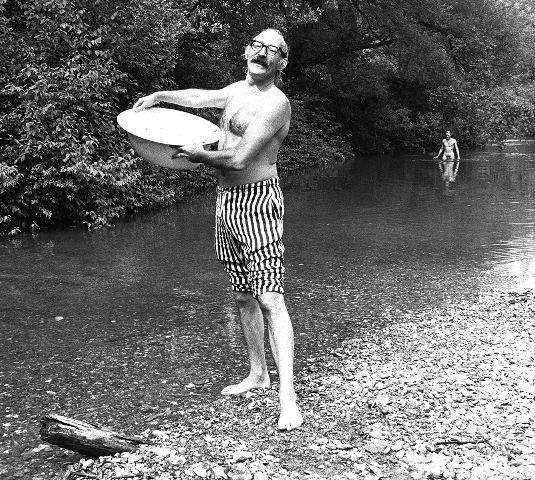 Professionally, he was an editorial and advertising illustrator as well as an arts educator at School for Visual Arts in New York. We knew him through summers and weekends in the Southern Berkshires. He was an integral member of our extended family.

A book he had been writing for decades remains unfinished, an intricate, chaotic, all-encompassing exploration of perception, the workings of the brain, pulling bits from most anywhere, a bit like Einstein's unfinished unified field theory, an attempt to explain all four of the forces in the universe as being part of the same field.

For many years, he hosted any and all of us on countless days down by the Green River which bordered a portion of his land to the northeast. Parties, cookouts, mudbaths were beautiful manifestations of clothing optional hippie culture at its purest. I will never forget the time when a couple of fisherman wandered around the upstream corner to come upon our naked tribe. They continued on, passing us with eyes averted.

As we aged, the Green River days slipped away, unable to withstand the competing distractions of newly acquired spouses, families, interests and obligations fragmenting our swarm. We aged. Jerry aged.

Visiting with him a couple of days ago, I'm relieved and grateful that I could say "goodbye" and "thank you" before he slipped away.