The Brothers Khan by George Pfirrmann

Brotherhood at the Extremes 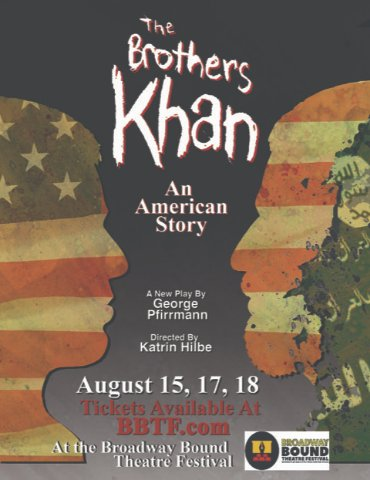 In this era which has generated a nigh unprecedented  displacement and resettlement of refugees, George  Pfirrmann delves into the human conundrum of self definition buried in the frightening headlines of violence and despair. The play speaks to a very American experience; how do minority groups remain true to self and part of the larger culture in the face of isolation or discrimination?

Rustam (Max Beckman) is a young man being internally destroyed by anger and violence as he seeks to find identity in religious extremism. His brother, Dzhabrail aka 'D'  (Amir Kurtic) has found his identity through education and assimilation.  Both came to America in their teens, refugees from egregious ethnic and religious persecution in  Chechnya. They have been estranged for years as each has buried the past in their own vision of the future.

Dzhabrail and his successful American fiance Susan (Malka Wallick) invite Rustam and his religious extremist and emotionally unbalanced girlfriend Yana (Rachel Halper) to a celebration in their home of the Night of power, Laylt al -Qadr. The holiday does not go well.

Rustam arrives with guns in his gym bag, ready to  commit a terrorist act, which his girlfriend has planned.  D wants to announce his engagement and upcoming fatherhood, and do a bit of bragging.   Each accuses the other of disloyalty to the 'way we were raised', and neither can believe that the other has strayed so far off the path. D is a successful  computer app designer and is no longer an observant Muslim.  He has not told his fiance about his life in Chechnya. She does not even use his real  name.  She is an open minded liberal lawyer who works for charitable causes, and describes herself as an agnostic.

Rustam can't keep a job and seems unsettled both financially and socially. He has turned to religion as a way to hold on to his roots and his sense of his own  place in an alien and not always welcoming place. He too has departed from the values in which he was raised and turned to violence in response to the violence he sees perpetrated against Muslims  both in America and abroad.  His girlfriend is obsessed with terrorism as a spiritual answer.  It is in the stark contrasts of their life visions that we explore the place where there is hope for reconciliation. Director Katrin Hilbe keeps our focus on the horror that this young man has become and the cycle of violence into which he has been drawn.

The setting and lighting, which is both simple and surreal utilizes tenting and lighting by Colleen Shea, to convey an almost otherworldly context. We are prepared  for anything as Rustam  kneels in prayer for guidance from God to know what to do.

Hilbe's clarity keeps the focus on the impending decision. Violence awaits. The heavy duffel, which Rustam tells his brother contains gym weights is discreetly ignored in the corner of the dining room.  In a context of repeated emotional surprise, Hilbe maintains perfect pace and timing.

This is neither the triumph of Horatio Alger nor a praise song for isolationist solutions. It is an American story, one which struggles with self identity and assimilation. It is an American tragedy, which raises issues that have echoed in different accents since our founding.

We are left, as is our protagonist, Rustam, asking God for forgiveness, mercy and guidance through a painful and complex labyrinth. We too create our own cycles of intolerance and are often unable to celebrate the brotherhood of mankind.  In Hilbe's hands, Pfirrmann's play is both arresting and wrenching.