You Better Sit Down: Tales from My Parents’ Divorce

The Civilians in Residence at Williamstown Theatre Festival 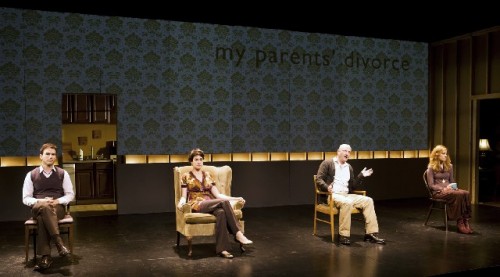 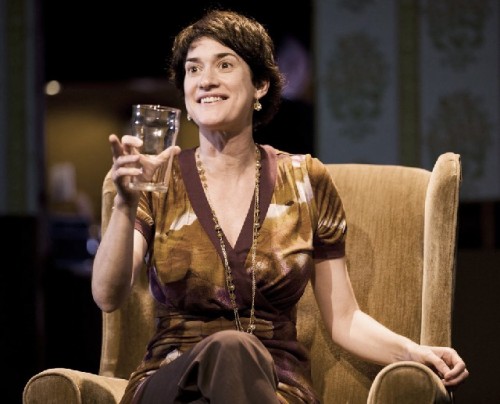 The concept for the play was inspired by Jennifer R. Morris’s mom Beverly. 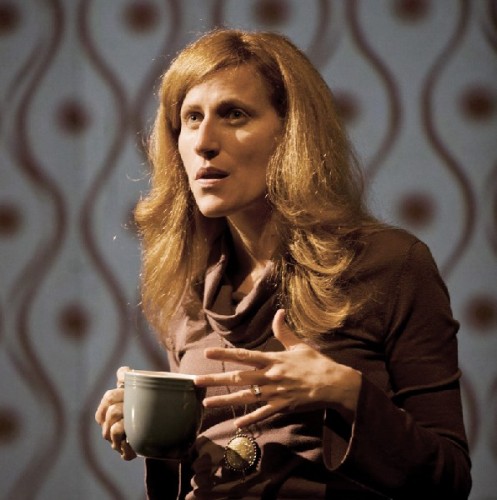 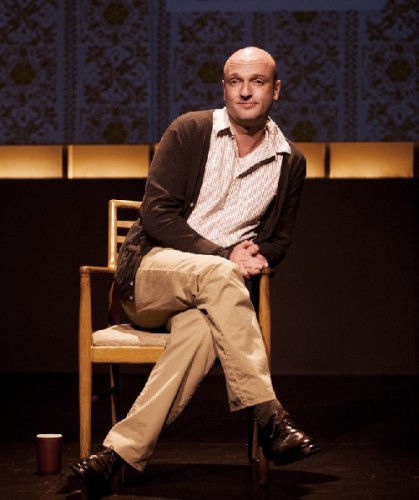 Matthew Maher channeled both of his socialist parents. 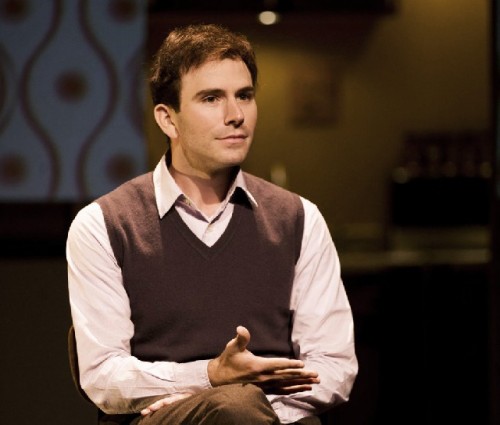 There were mixed feelings in anticipation of You Better Sit Down: Tales from My Parents’ Divorce, the final production on the Nikos Stage in the summer long Williamstown Theatre Festival.

We sat contemplating a sheet rocked wall, designed by Mimi Lien, spanning the width of the stage. The seams were untreated, and there was a raw sensibility like a site under construction. There was a narrow band of translucent elements about a third of the way up the wall. Near the end of stage right was an unfinished doorway entrance providing glimpses of a kitchen with stove and cabinets. There was an exit to an undefined room area on stage left. In front of the wall were four mismatched chairs.

While waiting for the one act play by the Brooklyn based, multimedia, experimental theatre group, The Civilians, to begin, I chatted with a woman seated near us. She proved to be Beverly, the mother of Jennifer R. Morris who conceived of the project and is one of the four performers.

Beverly commented that what started the ball rolling was the story of a Tiffany lamp which she and her former husband fought over. It had been owned by his family. But during the settling of the estate, she had previously put her name on the valuable object.

As sometimes happens members of the family, before the demise of parents, had been instructed to put claims on items they wished to inherit. It came through his family, but they acquired it through her efforts.

It is indeed fascinating what families fight over in settling estates or couples dividing property during a divorce. We all have those stories.

We commented to Beverly that it must be worth a couple of thousand dollars. She gestured with her hand indicating more. Apparently $40,000. That’s quite a lamp. I asked if she had taken it to Antiques Road Show? No. But it is about to be featured on PBS this month.

Beverly was lively and fun. A good sport, and great enthusiast of her actor daughter's efforts. She had seen the production during workshops in Brooklyn. Including a preview at WTF. She was there enjoying it again. It must be odd to see yourself portrayed on stage.

While Beverly cooperated with the project and consented to be interviewed, her ex husband did not. He has declined to see the play in which he and their failed marriage are a part of the dialogue.

While full of rich humanism and humor, wonderfully presented by Jennifer, frankly, neither parent comes off particularly well. After the show, I asked Beverly about that but she appears to take it in stride.

That tug of war over the Tiffany Lamp launched what proved to be a fascinating and absorbing evening of theatre.

It seems that Jennifer, a founding member of the widely admired group The Civilians, proposed to other members that they interview and tape record their divorced parents. Six members- Anne Kauffman, Matthew Maher, Caitlin Miller, Jennifer R. Morris, Janice Paran and Robbie Collier Sublett- contributed transcripts for the project. There were varying degrees of complications including deceased parents.

From the transcribed texts, they began to workshop the narratives into its current form. It came to Williamstown as a work in progress, but with some tweaking here and there leaves ready for an Off Broadway run. Once word gets out, it will surely appeal to audiences. While the topic of divorce seems like grim material for an evening of theatre, it reaches into all of us.

Divorces occur when couples stop trying, become self absorbed, or injure each other in countless ways. All of that was conveyed during this performance. It is tough material to sit through even with the release of humor.

The play also seems to polarize audiences. Younger members of the audience connect with the players through humorous and shattering experiences with their parents. Fueled by serendipity, I identified with my new friend Beverly and the other parents who conveyed aspects of the zeitgeist of my generation.

The parents presented varied in their issues and circumstances.

There were so many reminders that the qualities that first attract us to our mates, great sex, physical beauty, financial security and social status, intelligence, social and political beliefs, obsessions, common interests such a travel, the arts and food are hardly enough to sustain us through decades. Those who marry young often grow apart, with children as the devastated artifacts of that process.

Caitlin Miller (Mary Anne) evoked her devout Roman Catholic mother bringing up four children. She proved to be the most richly nuanced of the performers with wonderful facial expressions and gestures. In deepest despair, she left home and called her priest from a phone booth. In a moment of crisis, she was told to make an appointment for the following Saturday. It represented not only the failure of the marriage but her faith in the Church.

Matthew Maher (John/ Frinde), who appeared in Ibsen’s Doll’s House earlier in the season on the Nikos Stage, portrayed both parents who were ardent socialists. He would kind of tug at his cardigan sweater in a mincing manner to convey his mom.

As political activists and ultra liberals, they shacked up but were pressured into marriage by her parents. Their “why not” response, as is so often the case, was a recipe for disaster. When she later had an affair that ended the marriage, he was apparently accepting of the change. Maher conveyed what appeared to be an amicable no fault divorce.

Which was hardly the case for Jennifer R. Morris (Beverly). She proved to be a robust and galvanic actress. But knowing her Mom, ever so slightly, one senses that she had fabulous material and a really colorful character to deal with. Dad, a drunk, does not come off well. He was establishment Ivy League, while Beverly was from a working class, street wise background.  Her WASPY dad, in a moment of anger, stated the mistake of marrying a Jew.  With comic impact, that brought down the house, Jennifer slowly enunciated Beverly’s correction. Not a Jew, but a “Jew-esss.”

To be fair, we only heard Beverly’s side of the story. Clearly Jennifer has sided with her Mom. But we miss his rebuttal.

Perhaps it is indicative of parents who just walk away from relationships, leaving spouses and children to sort through the mess. Considering that 50% of all American marriages end in divorce that’s a really big mess.

With a soft spoken Southern accent, Robbie Collier Sublett (Janet) was the least engaging of the quartet. It is difficult to determine whether it was a weak narrative or its underplayed performance. Compared to the other three actors, his delivery of Janet was introspective, tentative, and less compelling.

Having the four performers seated could have been quite static. The notion was embedded in part of the title of the play You Better Sit Down. But this was varied by movements and projections that transformed that sheet rocked wall into a canvas with text and images by Caite Hevner.

The first names of the characters and the segments from romance to separation were defined by the projections. It was a nice way of visually organizing what we were experiencing.

Now and then, one of the characters would get up and move around. In the kitchen we could hear the kettle whistle as they made tea then returned to their seats. Through the door, we watched as Matthew poured himself a cup of coffee.

During the run of the play, there is talkback with the audience after performances. There is a sharing about the impact of divorce. Also audiences are curious about the methods of the company that entail investigation of compelling topics and compiling of transcribed interviews.

It is a unique and interesting approach. On this evening, instead of a talkback, after a break, we returned for a performance inspired by the technique of the company. During the residence at WTF, Maher and Morris worked with acting interns.

In just one week, they came up with a performance that was just a hoot. There were some 25 or so young actors doing fascinating solo riffs as well as singing and dancing as an ensemble. The energy and fun was just off the hook.

Clearly it was a terrific learning experience for the young actors and a fabulous template to give form and structure to classes in improv. For the audience, which howled its unfettered approval, the performance was a delicious bonus for a truly terrific evening.

The only pity of the run of You Better Sit Down: Tales from My Parents’ Divorce is its brevity. Tickets, unfortunately, are hard to come by. It would be great to have this company return for a longer stretch next season.