Brace Yourself by David Epstein 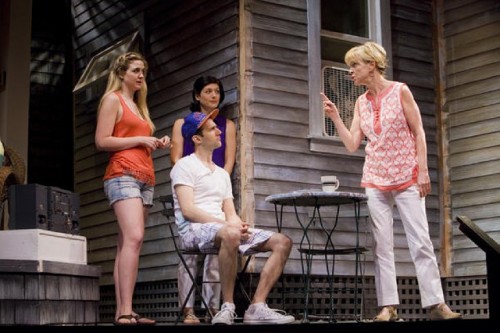 In the cottage on Fire Island. Photos by Chris Reis 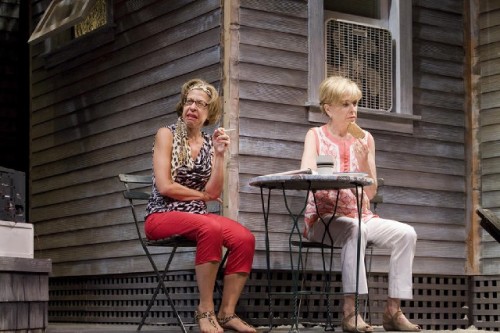 Yentas on the porch, Jackie Hoffman, left and Jill Eikenberry. 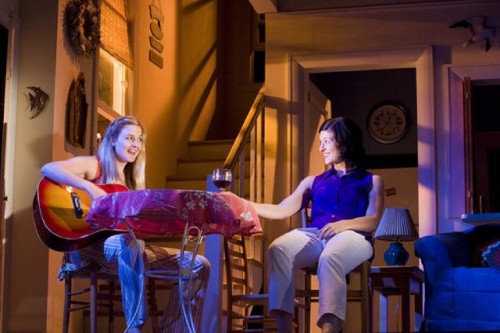 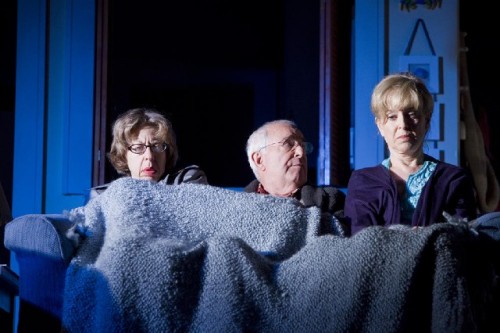 Riding out the hurricane. 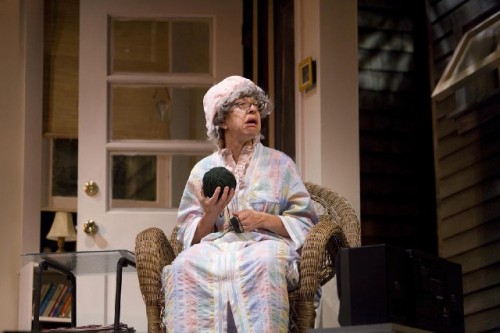 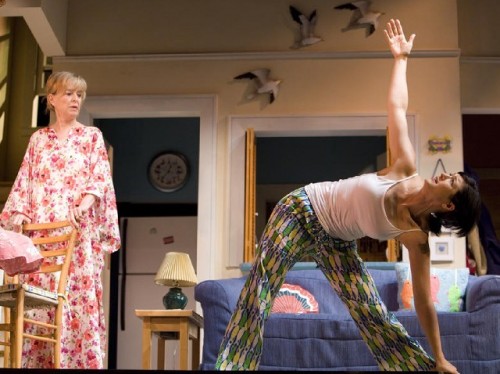 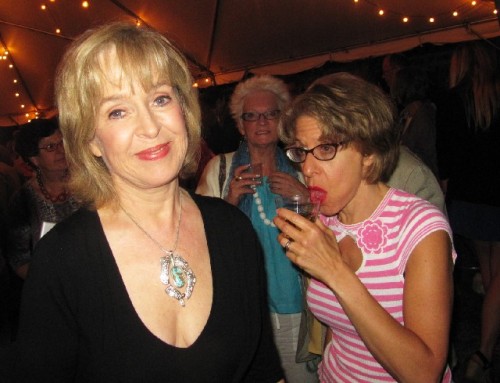 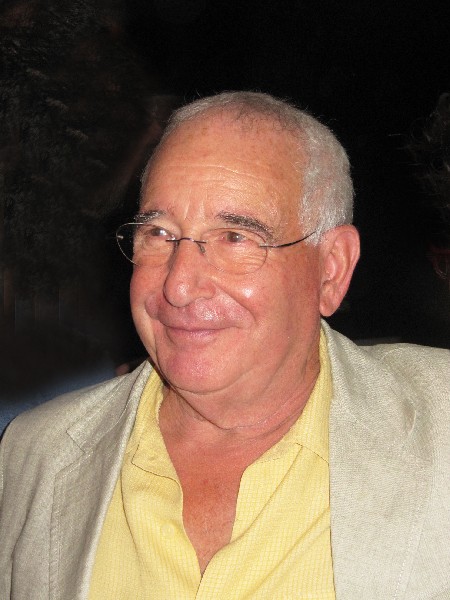 Michael Tucker is married to Eikenberry on and off stage.

Waiting for the one act, one hour and nine minute play Brace Yourself, by David Epstein, to begin we contemplated the neatly designed set by Hugh Landwehr.

With the cut away outer wall we gazed into a cozy, shingled cottage, jammed in side by side by others in the densely packed “family section” of otherwise wild and crazy Fire Island. The sound design by Scott Killian nicely enhanced the seaside ambiance with crashing waves and the plaintive squawking of sea gulls.

It is ironic that the cliff dwellers of  New York’s Upper West Side replicate that urban density, and its attendant social abrasions, in an ersatz bucolic ocean front setting.

The one thing that Fire Islanders seem to miss most is Zabars. Appropriately in a kvetch/ screed of laments and complaints the yenta friends Sunny (Jill Eikenberry) and Jeanette (Jackie Hoffman) discuss the difficulty of finding a decent Danish. While noshing on a pathetic local specimen Sunny observes that it has not enough cheese and is too sweet. Jeanette wants to know “Are you going to eat it all?”

But the poor quality of the local bakery is the least of Sunny’s many, more or less comedic, problems.

She is up to her neck in wedding plans for an ever more resentful and independent Nina (Tara Franklin).  Nina complains that the wedding is not about her with too many guests whom she doesn’t know. (Does that sound familiar?) Compounding the logistics and decisions for mounting the event on the island is an impending hurricane. Then there is a tom cat, twenty-something son Andy (David Ross) who, in Sunny’s opinion, is  unacceptably promiscuous. It’s his age and normal argues the truly endearing (real and stage) husband Milt played warmly by Michael Tucker.

Eikenberry as the leading character was not in good voice and had difficulty projecting or establishing her controlling persona. Sunny was mostly upstaged by the sharply focused, brilliant Jeanette in their scenes together.  Eikenberry evolved into the role and held her own in the much more amusing second half of the brief play.

Oh yes, there is also an elderly aunt, flown in for the wedding (played hilariously by Hoffman). In a brief but outrageous scene she talks about not having an orgasm in more than forty years. With her brother in law. Who had a penis “This big.” Adding “It was worth it.”

Later, making her way into the cottage with “Hello, is anyone home” Kitty (the ever charming and engaging Clea Alsip) pokes the sleeping aunt and finds her quite dead. Seems she’s an unemployed EMT from Yale. Didn’t know they offered that.

So there you have it: Lousy, noisy disgusting neighbors, a wedding, ungrateful daughter, randy son,  approaching hurricane, and dead aunt to get rid of (the village ambulance is having an oil change). Also Jeanette and a cabal of local villagers are leaning on Milt to run for Mayor. But he’s on vacation fishing for striped bass and prefers to leave all the stress back in the city. Can you blame him?

All of these elements, lightly tossed, are the makings of a TV sitcom with a piped-in  laugh track. The audience did laugh, particularly in the end, when Kitty and Sunny share a joint on the couch then joined by Jeanette who is a closet pot head. Milton shows up for a toke cranking up a CD particularly to annoy the neighbors. Their kids, Nina and Andy, of course, are shocked at Mom and Dad getting ripped.

When Kitty was first shocked at the notion of sharing a joint with Andy’s bitchy mom, Sunny brought the house down proclaiming “My generation invented marijuana.” How true. She gave it all up to birth the kids but now declares, trust me, she is unlikely to be pregnant again.

The pot scene while played for laughs also felt gratuitous. As if the playwright was looking for tricks and gags to sustain a family drama.

Like the threatening hurricane, for me, this slight comedy mostly passed out to sea. It may have huffed and puffed but it didn’t blow my house down.