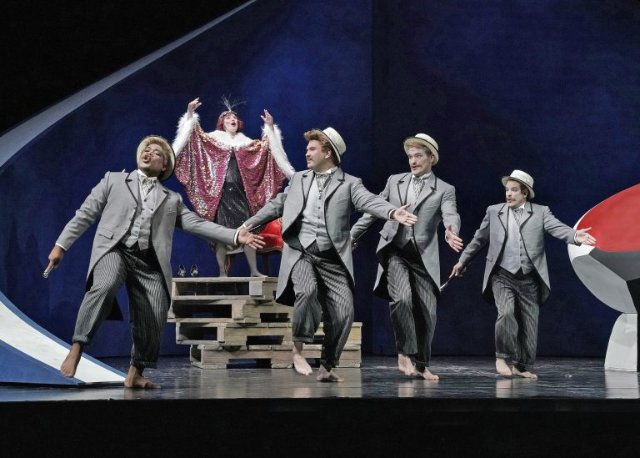 Liv Redpath as Zerbinetta (above) and the Commedia del’arte performers (Barbershop Quartet) Terrence Chin-Loy as Brighella, Anthony Robin Schneider as Truffaldino, Jarrett Ott as Harlequin, and Matthew DiBattista as Scaramuccio.

Richard Strauss loved the female voice. In his earliest successful operas, bloodthirsty and vengeful dramatic sopranos hold the title roles. Salome and Electra are harsh in disposition and the music reflects their temperaments. The latter also represented his first collaboration with librettist Hugo von Hoffmannsthal. The pair would continue with the comic Der Rosenkavalier, containing some of the most delicate, ethereal music in all of opera. They would follow its great success with a virtual melding of the two earlier extreme styles in Ariadne auf Naxos, full of beautiful, often sublime music.

In Ariadne, the character “The Composer” notes that music is the greatest of the arts, foreshadowing Strauss’s last opera three decades later. Having been long dead, Hoffmannsthal did not participate. In that parlor opera, Capriccio, composer and librettist argue which is more important, words or music. As Ariadne evolved, one can sense the two creators bickering over content, with a result that is an uneasy mix of opera seria and opera buffa. While that combination of idioms is in keeping with the opera’s central thematic element of the clash between entertainment as crass diversion versus uplifting experience, the story doesn’t come across as deftly as the music.

The opera is a play within a play. The “richest man in Vienna” has commissioned an evening’s spectacle at his manor for guests – a serious opera followed by a commedia dell’arte. However, as a self-indulgent bully lacking grace and good taste (apply your own current example of this person), at the last minute, he demands that the two run simultaneously so that the fireworks display can go off on time.

The prologue is a delightful comic romp with diva-types from the two troupes protesting the abomination of performing at the same time, and impresario-types looking to justify and solve the challenge. In his first homage to sopranos, Strauss has The Composer, a trousers role played wonderfully by the fretful Amanda Majeski, blast off with a demanding aria, “Sein wir weder gut.” Competing musical styles of opera and comedy appear, while the Major Domo has a speaking part. The rationale for that, other than to assure that the audience gets that this is buffa, is unclear. Tim Albery, the director of this production, has chosen to present the prologue in English and the “opera” in German (mostly), which distinguishes the casual vernacular of the machinations of the casts from the presumed formality of the performance to follow.

The lively action of the prologue takes place in the basement. The set is dominated by a stage-wide wall well downstage, facing the audience, with four doors having the look of a hallway in a cheap hotel. Performers constantly going in and out of the doors conveys the sense of a farcical play like “Noises Off.” In this case, doors were not slammed, but the comedy could have benefited by that.

The play-within-a-play is an ancient Greek drama. The music in this act, called the “opera,” is pleasant to the ear, but like much modern music, not memorable to most mortals. The composer’s love of sopranos is most evident here, and the showcases meet high expectations. Amanda Eschalaz as the grieving Ariadne looking toward death, leads with a lengthy dramatic lament, followed by the charming coloratura Liv Redpath as Zerbinetta, the leader of the comedians, who consoles Ariadne. In addition, the nymphs deliver a soprano trio, enchanting but without the tinkling delicacy of the ensembles from Rosenkavalier.

For the “opera” act, this production offers a sleek, cool, futuristic look in blue with red highlights, but the look can’t conceal structural weaknesses. Conceptually, the simultaneous performance of the two entertainments is to save time, yet very little simultaneity occurs. What’s more, the drama overwhelms the comedy, so that the comedy seems an unwanted intrusion. Ariadne’s opening soliloquy seems endless and static and is punctuated by mugging from the comedy’s barbershop quartet which disrupts the drama of the aria. But what does comedy do to elevate dramatic situations and music? Since comedy will not enhance drama, the balance would work better if dominated by the comedy. The concept would also be better served if the composer had given us counterpoint ensembles between members of the two troupes, especially a septet between the nymphs and the barbershop quartet.

Despite its flaws, Ariadne auf Naxos has much to offer. Fans of Strauss’s musical idiom will appreciate this production.

Ariadne auf Naxos an opera composed by Richard Strauss with libretto by Hugo von Hoffmannsthal is produced by Santa Fe Opera and plays at its opera house at 301 Opera Drive, Santa Fe, NM, through August 25, 2018.

Posted permission of For All Events.