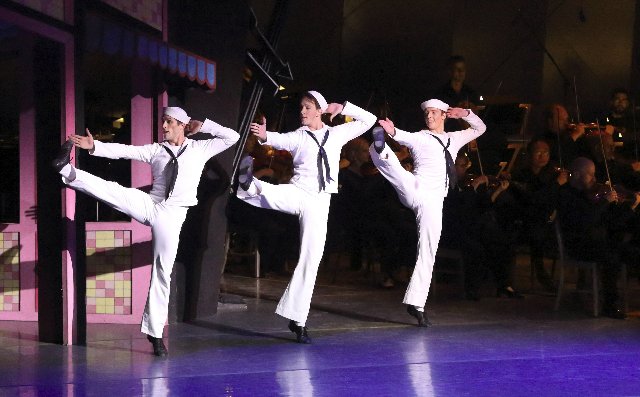 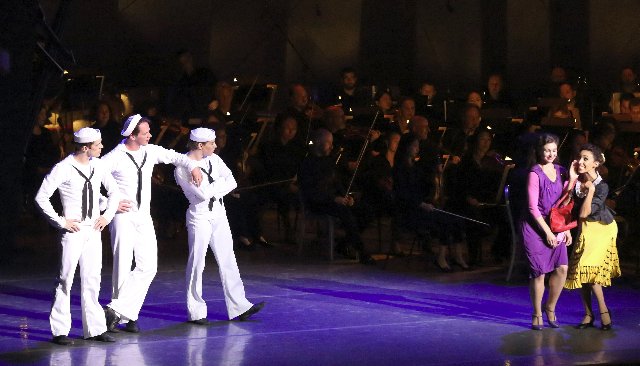 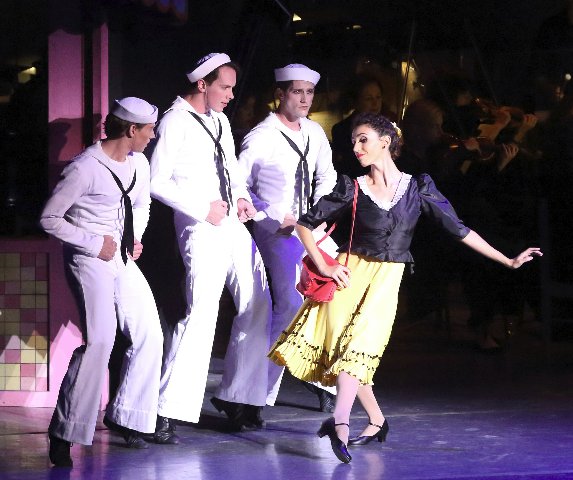 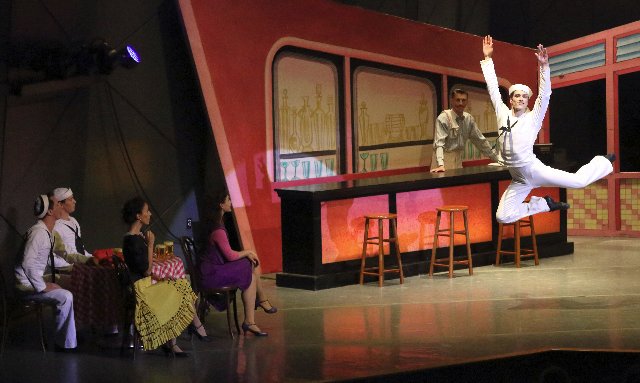 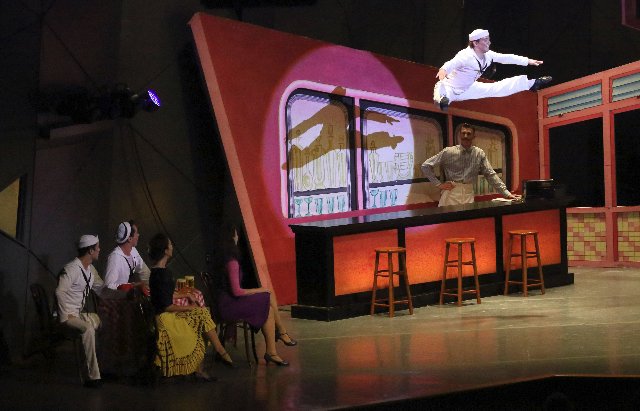 The summer long centenary celebration continued last night at Tanglewood with an All Bernstein Program conducted by Andris Nelsons.

Because of an asthma condition Leonard Bernstein did not serve during WWII.

On the home front the war years were productive. His contribution to the patriotic zeitgeist was a whimsical dance inspired by three sailors on shore leave. The collaboration with dancer and choreographer Jerome Robbins resulted in Fancy Free in 1944.

It appears that the idea for the dance originated with Robbins who, by word of mouth, found and approached Bernstein. Both men were 25 at the time. The success of the dance led to the Broadway musical On the Town which expanded on the theme of the dance.

Earlier in the Tanglewood season there was a concert version of On the Town. The sprightly and entertaining musical is readily familiar to Berkshire audiences. It was produced for Barrington Stage Company in 2013 and transferred for a run on Broadway.

With some invention it was staged in the Shed in collaboration with Boston Ballet. It was quite wonderful and we would love to see more such efforts in coming seasons.

The set by Oliver Smith was squeezed into an area at stage right. It comprised the bar and a table where the randy trio of sailors drank and aggressively pursued randomly passing dames. It’s what Gobs on shore leave, shipping out for combat, have traditionally done since a thousand ships were launched to avenge Menelaus.

The music delightfully provides a percussive, pulsing thrust to their ultimately frustrating misadventures.

The trio are buddies as the skilled dancers aptly interpret the serio-comic ballet of Robbins. There are wonderfully executed leaps and twirls. The sanguine enthusiasm of the pals is taken up a notch when a pair of skirts slide on by.

That there are two lovely ladies instead of three sets up the odd man out tension that informs the dance. The seduction of the ladies results in delightful competition. There is a cycle of pairing and cutting in. The women are alternately charmed and repulsed by all the aggressive moves.

Taking turns to impress the ladies, now settled into the bar, they take turns with charming and competitive solos. Each has a special trick and the delighted audience burst into applause.

Ultimately, however, there was no way to resolve the conundrum of  bad math. Fists fly and we catch just glimpses of  arms and legs as the action takes place behind the bar.

Boys will be boys but, by then, the ladies have had enough of the Neanderthal mating game. They slither off into the night. When they emerge bashed and battered the guys realize that they have come up snake eyes.

Then, delightfully, another lady waltzes by. As she exits with seductive flourish the piece concludes with the sailors chasing after her.

Knowing On the Town it was a rare treat to see the dance that inspired it. With song added to dance the theme is more elaborately fleshed out. Taken together they provide a view of how Bernstein helped to keep spirits up during a time of war.

After intermission we returned for other aspects of Bernstein.

The Divertimento for Orchestra was created  during a mostly fallow sabbatical from conducting to focus on composing. It was a response to the loss of Felicia Montealegre, in 1978, following twenty-seven difficult years of marriage.

He was asked to compose a work for the 100th anniversary of the BSO. What resulted was the charming and entertaining Divertimento of eight themes performed in approximately fifteen minutes. At the podium Nelsons paused between each segment. At times he supported himself with a hand leaning on the railing. With this causal posture the baton precisely conducted the musical vignettes. It reveals Bernstein the showman at his most theatrical. There was a lot of pop pizzazz to the delight of the audience.

The concert ended with  the demanding and difficult Serenade After Plato.

A graduate of Boston Latin School, as was I, there were masters who fondly recalled him practicing in the assembly hall. Later he donated a piano to the school.

That education imbued him with a love of the classics. In five movements he celebrates the ancient Greeks. The violin of Baiba Skride, however, was so subtle and subdued that at times it was barely audible. Particularly impressive was her tenuto a softly sustained vibrato that ended the piece.

The maestro conducted the composition at Tanglewood in 1986 with Midori making her BSO debut. One sensed that it is a particularly challenging work and the mood it evokes is spectral and poetic.