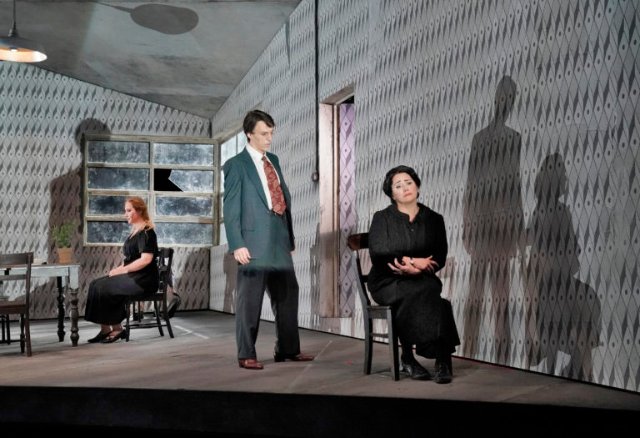 Leoš Janácek has become one of the most performed opera composers of our time, despite the disadvantage of creating librettos in Czech, not a favorite singing or performing language of most opera companies or singers. His international breakthrough occurred early in the 20th century, notably with the opera Jenufa. Previously wed to the romantic style of countryman Antonín Dvorák, Janácek delved more deeply into Moravian folk music as the basis of his musical composition, producing accessible, melodious scores with great patriotic significance. His other creative thrust was into realism, which is well represented in his libretto for this opera.

Although the narrative of Jenifa is straight forward, its family relationships back story of step-this and half-that complicates matters. Jenufa’s mother died in childbirth, but her widowed stepmother Kostelnika has raised her as her own. Jenufa loves her cousin Števa, who through the right of primogeniture, has inherited a mill, and is thus prominent and prosperous. Unknown to him, Jenufa carries his child. Despite their pending marriage, Števa’s younger half-brother, Laca, is desperately in love with Jenufa.

Against this backdrop, Števa receives a reprieve from the military draft and reveals a dark side to his character in celebration – drunkenness, womanizing, and demeaning behavior. Meanwhile, the resentful and volatile Laca slashes Jenufa’s face with a knife in an act that seems accidental but perhaps is driven with subconscious intent. Števa can no longer love the disfigured Jenufa, and from here, the tragedy begins.

The composer draws strong characterizations, and the clash of goals of these personalities drives the narrative. Outwardly, Jenufa is the weakest of these, yet in her own way, she has considerable self-determination. She has made herself and others literate in a hard scrabble town with little appreciation of learning. And when confronted with numerous setbacks, she shows strength, resilience, and realistic understanding of circumstances. Although her marital future depends on the men closest to her, Jenufa’s choices are largely influenced by her dominating stepmother Kostelnika, a church sextoness who possesses a determinant social and moral compass, but also self-protective pragmatism.

The title characters in Janácek’s four most popular operas are all female. The source for this opera is Gabriela Preissová’s novel Her Stepdaughter, whose title suggests the importance of the stepmother in the drama of Jenufa’s pregnancy and its aftermath. Indeed, these are two roles of near equal importance and challenge.

Some consider Kostelnika a graduation role from that of Jenufa, and this production’s stepmother, played by Patricia Racette, has done just that. The versatile and enduring Racette exhibits complete dramatic vocal and acting power, culminating in her great soliloquy.  And despite her character’s manipulativeness and malevolence, it is hard not to have some sympathy for her. Like Jenfa, she is victimized by a set of social norms, and actions not of her own doing. Laura Wilde as Jenfa completely holds her own. A rising dramatic soprano, she demonstrates range, amplitude, and control befitting the role. The women’s duets together are riveting.

The lead males acquit themselves with flying colors as well with fine and penetrating voices. Alexander Lewis’s Laca chews up the scenery with his menacing portrayal of malcontent. Yet his unrequited love suggests that there may be an underlying humanity that simply needs the right conditions to correct his despair. As the blessed one who has everything, Števa could be the ideal man, yet he is less redeemed than any of the troubled four. Richard Trey Smagur’s sterling tenor voice belies the bully’s role he plays, which also fits him to a T.

Several minor roles are also well performed. The standouts that deserve some notation are Susanne Mentzer as the grandmother and Will Liverman as the foreman.With the exception of a little light relief in the wedding preparation, Jenufa is tense and emotionally charged from beginning to end. Janácek endows his lead characters with complexity and with demanding vocals. In keeping with the tone of the action, much of the vocalization is harsh, yet particularly in the orchestra, appealing passages emerge. Overall, the score fulfills many demands with great success.

In keeping with the environment of the story, the production is stark, bleak, and aesthetically unappealing, with two interior sets by designer Charles Edwards. Rather than using the full width of the stage, the walls taper from forestage to rear, suggesting that the characters are trapped. But then, for Act 1, the back wall drops away, as happens only in this wonderful venue. The beautiful dusk sky shows through for a while, perhaps in false hope that all will be well. But the most compelling design feature is Maxine Braham’s choreography of the chorus. The foot stomping number at the mill upon Števa’s appearance is particularly rousing.

For the opera goer looking for an uplifting experience, this is not it. But this well crafted piece does offer an engrossing high quality artistic experience.

Jenufa, with music and libretto by Leoš Janácek is produced by Santa Fe Opera and plays on its stage at 301 Opera Drive, Santa Fe, NM through August 15, 2019.