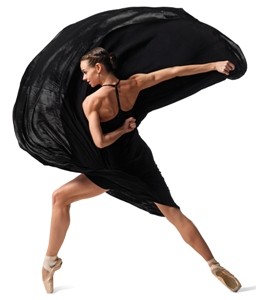 Jacob’s Pillow winds down its 2012 season.

The Joffrey Ballet, one of America’s pioneering ballet companies of the 20th century, makes a rare East Coast appearance to conclude the Jacob’s Pillow 80th Anniversary Season August 22–26. The Joffrey Ballet returns for the first time since its high-profile appearances at the Pillow in the 1950s and 60s, presenting an impressive program that features Taiwanese-American choreographer Edwaard Liang’s Age of Innocence, Russian choreographer Yuri Possokhov’s Bells, and the world premiere of Son of Chamber Symphony by Stanton Welch, Artistic Director of Houston Ballet.

The program opens with Edward Liang’s Age of Innocence, set to music by prolific postmodern composer Philip Glass and the award-winning film composer Thomas Newman. The work is inspired by the writings of Jane Austen and illustrates the spirit of women in the Victorian era despite societal constraints. The work will feature a different cast for every performance. Liang’s choreography complements Maria Pinto’s “thoughtful costume design [which] cements the 18th/19th century vibe without being too literal” (Catherine L. Tully, The Huffington Post). The ensemble work hearkens to the English country dances so significant in Austen literature, and the expressive pas de deux segments reflect the deepening emotional connection between the men and women in a time of emotional repression. Funded by the Prince Prize to commission original work, Age of Innocence premiered in 2008 and was proclaimed a “newly minted masterpiece” by Hedy Weiss of the Chicago Sun-Times. Liang, a former dancer of New York City Ballet and Nederlands Dans Theater, is well known for his acclaimed works Flight of Angels and Distant Cries.

The second work in the triple bill is the luxurious ballet Bells by Yuri Possokhov, former Bolshoi Ballet dancer and resident choreographer of the San Francisco Ballet. Set to seven piano compositions by Sergei Rachmaninoff, Bells “mixes classic form with seething intensity…Possokhov embraces an often exhilarating tradition only to tease and tickle it whenever the mood strikes” (The Chicago Tribune). This work, a meditation on the nature of relationships, features 10 dancers in each of the two casts that display inventive partnering and impressive unison work. Flicked wrists, gyrating hips, and sharp leg movements blend with fluid and lyrical ballet language in a work that manifests a union between the Russian tradition and the American innovations. Bells features costumes by award-winning designer Sandra Woodall, who is credited with the costume design for over 200 productions all over the world, and has worked with some of the most highly-regarded companies such as the Bolshoi Ballet and the San Francisco Ballet.

The program concludes with the world premiere of Australian choreographer and current Artistic Director of Houston Ballet Stanton Welch’s Son of Chamber Symphony, set to the eponymous score by Pulitzer Prize-winning composer John Adams. Welch, a former dancer and resident choreographer of The Australian Ballet, has created works for leading companies such as American Ballet Theatre, Birmingham Royal Ballet, and the Royal Danish Ballet, among many others. A Joffrey commission, Son of Chamber Symphony features costume designs by Travis Halsey and lighting design by Jack Mehler. This will be Welch’s second world premiere at the Pillow; in 2011 he choreographed a work on the students of the The School at Jacob’s Pillow Ballet Program for the Season Opening Gala. Welch has been named “an undisputed talent” by Anna Kisselgoff and “a staple of the international ballet scene,” by Jennifer Dunning, both of The New York Times.

The Joffrey Ballet, founded by Robert Joffrey in 1956 and co-directed for many years by Gerald Arpino, has been considered “America’s Company of Firsts:” the first company to perform at the White House, the first to appear on television, and the first and only company thus far to appear on the cover of Time magazine, among other achievements. Currently led by Artistic Director Ashley C. Wheater, himself a former Joffrey dancer, and Executive Director Christopher Clinton Conway, the company is based in Chicago, Illinois. Its diverse repertoire includes narrative classical ballets, reconstructions of masterpieces, and commissioned contemporary works. The Joffrey Ballet, comprised of 45 dancers, “has long been known for its versatility, moving as it has from one divergent style to another with easy verve for half a century” (Jennifer Dunning, The New York Times).

Pillow founder Ted Shawn championed Robert Joffrey's work from the very beginning of his career, presenting some of Joffrey's earliest works in 1952 and 1953 and again in 1957. The company had its Pillow debut in 1960, when Shawn presented The Robert Joffrey Ballet with Maria Tallchief as guest artist. When the company lost the substantial support of arts patron Rebekah Harkness, Joffrey created an entirely new organization and the Pillow played an important role in showcasing this newly-reorganized group in 1965.

This will be The Joffrey Ballet’s first appearance since 1965. In this historic return engagement three dancers set to perform, Graham Maverick, Ricardo Santos, and Jenny Winton, are alumni of The School at Jacob’s Pillow. Wheater, Welch and Possokhov have previously served as faculty members of The School’s Ballet Program. Additionally, the company’s Stage Manager is an alumna of the Intern Program at Jacob’s Pillow.

Since Robert Joffrey’s first Pillow performances 60 years ago, his company has enjoyed a dynamic relationship with audiences, and this unique story is explored by current director Ashley Wheater. FREE

Free Pre-Show Talks with Jacob’s Pillow Scholars-in-Residence are offered in Blake’s Barn 30 minutes before every performance.

A Post-Show Talk with Ashley C. Wheater and a Pillow Scholar will take place onstage on Friday, August 24.

BACK BY POPULAR DEMAND

Performed at Jacob’s Pillow in 2009, Fräulein Maria is an astute, hilarious, and moving production adored by non-dance audiences and dance experts alike. A marvelous deconstruction of Rodgers and Hammerstein’s musical The Sound of Music, Fräulein Maria is performed to the complete film score. Ballet, hip-hop, and modern dance merge with intelligent yet laugh-out-loud humor and cheeky theatricality. Karen Campbell of The Boston Globe comments, “The icing on the cake is the depth and range of the choreography. Elkins integrates disparate elements with such fluidity it’s like a whole new language, and his dancers are spectacular.” Roslyn Sulcas of The New York Times calls Fräulein Maria, a “mini-masterpiece of a certain kind, encompassing everything that is brilliant about Mr. Elkins’s choreography: his skillful craftsmanship; his musicality and timing; the effortless melding of every kind of dance technique you can think of, mediated by his own inimitable, highly coordinated physical style.” Tickets $43, available at jacobspillow.org and via phone 413.243.0745.

Amy Cova's work a very fast man in a very short skirt, inspired by the ancient rituals of the Tarahumara Indians is set to an original score by composer Brian Trahan. The dancers evoke play as a means to explore the physical and mental strength required for growth, success and happiness. FREE

Since Robert Joffrey’s first Pillow performances 60 years ago, his company has enjoyed a dynamic relationship with audiences, and this unique story is explored by current director Ashley Wheater. FREE

ME SO YOU SO ME, by Canadian dance artists Tiffany Tregarthen and David Raymond, is a duet that draws on inspirations as disparate as Japanese pop culture and classical Indian tabla rhythms. Physical comedy and quirky movement suggest Saturday morning cartoons, as Tregarthen's bending and stretching is juxtaposed with Raymond's angular lunges and squats. The surreal quality of the work is heightened by experimental Japanese percussionist Asa Chang's score. FREE

On the occasion of his 100th birthday, screen icon Gene Kelly’s legacy is explored in film clips and conversation with eminent film historian Jeanine Basinger. FREE

From its inception in 1933 to the present day, Jacob's Pillow has been home to extraordinary dance from around the world. In celebration of the Pillow's 80th Anniversary Season, remarkable images from each decade are grouped thematically in a unique commemorative exhibition. Culled from the extensive Jacob's Pillow Archives, this cornucopia of treasures includes a virtual Who's Who of the dance world and features rare materials never before exhibited. FREE

New York photographer Toby Old has focused his lens on specific locations like Coney Island and Times Square, and explored themes such as fashion shows, nightclubs, and boxing matches. His Jacob’s Pillow visits over the past five years have yielded images that capture both the place and the people who enliven it. Some of these photographs were recently featured in a Paris gallery; this exhibit marks the first time they have been shown in the U.S. FREE

A celebrated designer, illustrator, and artist, Ivan Chermayeff has created familiarly iconic images for hundreds of prominent clients such as the Museum of Modern Art and the Smithsonian and has won numerous awards. In 1955, with Tom Geismar, he co-founded the internationally-known New York City design firm Chermayeff & Geismar. Chermayeff's designs for Jacob's Pillow in the 1980s and 90s are still remembered for their bold vision and originality, and many are collected here for the first time. FREE

When President Barack Obama presented the National Medal of Arts to Jacob's Pillow at the White House last year, the Pillow became the first dance presenting organization ever to receive this

distinction. The medal itself and the signed presidential proclamation are on display in this exhibit along with some of the other awards received by the Pillow and its founder, Ted Shawn, including the Capezio Award, the Commonwealth Award, Shawn's medal from the King of Denmark, and other treasures. FREE

Photos from past Pillow seasons traditionally line the Bakalar Studio walls, and the current 80th Anniversary Festival offers a special opportunity to look back at memorable images from the Festival's history. FREE