Millenials Hooking Up in World Premiere 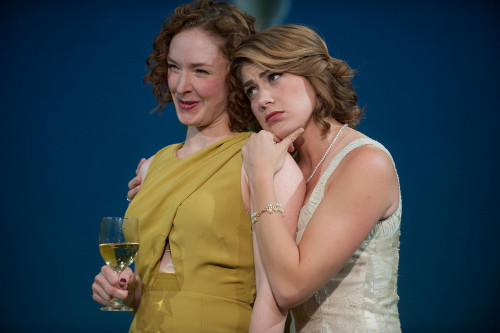 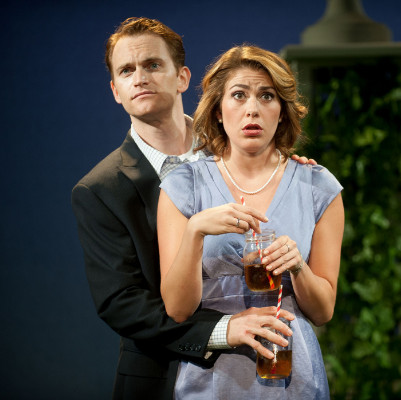 Allison is engaged to the Lothario Mark (Robert David Gant). 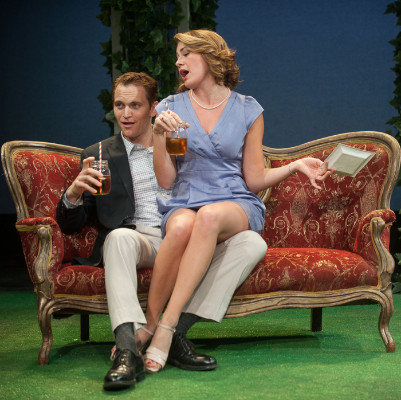 Lap dance on a Victorian couch. 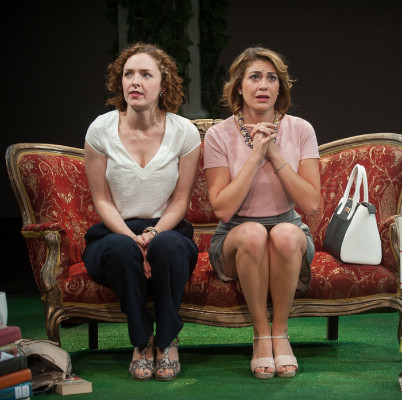 Houston we have a problem. 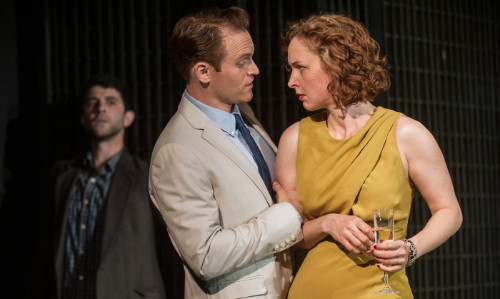 Ryan (Adam Gerber) suspects Lauren of having an affair with Mark. 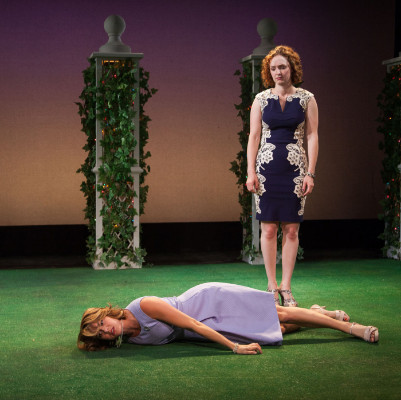 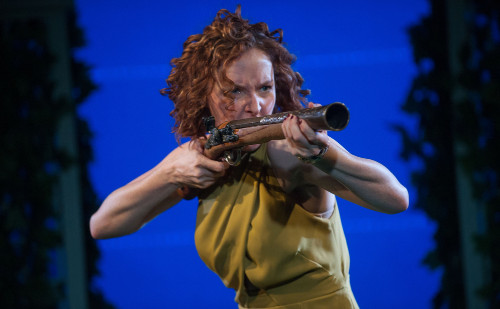 In a world premiere for Barrington Stage Company, Engagements, by Lucy Teitler is a millennial romp featuring young people for whom hooking up is more enticing than the tedium of love, marriage and lifelong commitment.

When pursued by a sex partner, the fiancé of her best friend, after rutting in the gazebo during an engagement party the response of Lauren (Amanda Quaid) is that she was drunk and hence not responsible. She argues that it was only sex for cripes sake.

Following that ill advised one-nighter (ten minutes actually) she is getting sex toys through UPS from an anonymous donor. Are they from that bounder and creep Mark (Robert David Grant)? Will she tell Allison (Kate Loprest) before it's too late?

Were we any different? It is now so long ago, as it was for the mostly senior audience, that it is hard to remember. We were the generation liberated by the pill but also devastated by STD and AIDS. Yes, there was a lot of casual sex which we saw back then as liberation.

The actors were all fine for their roles but I had trouble caring about them.

One goes to the theatre for entertainment, information and enlightenment. For all else there’s staying home and watching TV. Too often during what proved to be an apathetic evening with some amusement and sporadic laughs it seemed that a sitcom, Two Broke Girls, had made its way to Pittsfield.

Well, ok, the script and acting were a notch better than that but not by much. Attending live theatre we are stuck for 90 minutes and can’t switch it off. One might leave but there was no intermission and crawling over neighbors would be too rude. Critics, other than Wall Street Journal stringers, are supposed to tough it out.

Who knows, a second act may get better. But more often, well, it’s not.

In the first few years after college there are a lot of engagement parties and weddings. There is some competition among friends and classmates for the most elaborate celebrations. Parents spend fortunes on weddings. Too often couples are divorced not long after.

We suspect that’s what is in store for the utterly ditzy Allison. She is headed down the slippery slope, laughing all the way, in what is destined to be a failed marriage. She never walks but rather flits and twits about the stage in spastic, jumpy, comic minces. As for acting Loprest does this well but it soon gets tedious.

When nubile youngsters utter vows about sickness and health do they have a clue what they are getting into? There seemed to be a moat filled with sharks and crocodiles separating an audience of seniors from the millennials on stage.

Of course it might be different if some sweet young things could afford live theatre. Perhaps Teitler might turn this play into a script for TV or a date movie. It would do well at the mall.

Is it asking too much to expect gravitas and humanity from a play? It is what we have come to expect of new works on St. Germain Stage.

Who are these people and why are they acting this way?

We learn that Lauren is a graduate student whose field is Victorian Literature. Usually than means a few years on ramen noodles but she has a new dress (Beth Golderg) for each of the five engagement parties in this one act play. With shoes and accessories that’s a lot of scratch. It is implied but not spelled out that Lauren comes from money as does her spoiled, self absorbed friend Allison.

If Lauren has delved deeply into the Brontes, Dickens and Troloppe it appears that she has derived few if any insights. Too often it seems that the well heeled pursue degrees in English Lit by default. They don’t seem concerned with earning a living. There does not appear to be great demand for Lauren’s chosen field.

This in contrast to Ryan (Adam Gerber) the boyfriend of cousin Catherine (Phoebe Strole). They are crashing in Lauren’s Cambridge apartment. Catherine is strictly country mouse. She is with Ryan primarily because he is the only man she has had sex with.

Ryan is also a Ph.D. student in English Lit. but his field is semiotics. Which is to say, intellectual, mumbo jumbo, lit speak. That explains his initial contempt for Lauren.

But that changes of course.

Lauren it seems is not a nice girl. When smashed she has sex with guys she appears to hate. That describes a lot of dipsomaniacs.

In her case the idiot oil may entail an excess of Chardonnay or too many Cosmos.

Allison is trying the latest concoction a cucumber martini. Gin is out, so passé, but vodka is so in that it’s beginning to be out. So gin may be in again. She is looking for designer booze for her upcoming celebration.

The organization of which is tasked to Lauren. That’s what friends are for. And, of course, Allison will reciprocate when Lauren chooses a mate. But she can't. Recently she has broken up with a janitor.

Which is the hitch. Well, it gets complicated.

Do we care is the daunting question?

Again, that may depend upon how old you are. Even seniors can be young at heart.

Beyond an inept script there are basic problems with this production.

The sound design by Kenneth Goodwin was annoying. When we first meet Allison and Lauren there is noise behind us which we guessed was the ambient sound of a social gathering. It interfered with hearing the dialogue. Not that it really mattered. This ambient noise continued through most of the play. There was great relief, now and then in Lauren’s apartment, when it stopped.

The set and lighting by Brian Prather and Yi Zhao further mucked up the mishegas.

There was a row of several free standing vertical ersatz columns at the back of the stage. They were stuffed with fake ivy for a bucolic accent. During one scene they were illuminated with Christmas lights. This stood for the ambiance of those summer garden parties.

The interior of Lauren’s apartment was signified by a red Victorian couch. Given her field of study that made sense but it seemed totally old fashioned for a young woman. The stage designer was taking the metaphor too far. She was not, for example, decked out in Victorian gowns for those engagement parties.

On any number of levels this production just didn’t cut it.