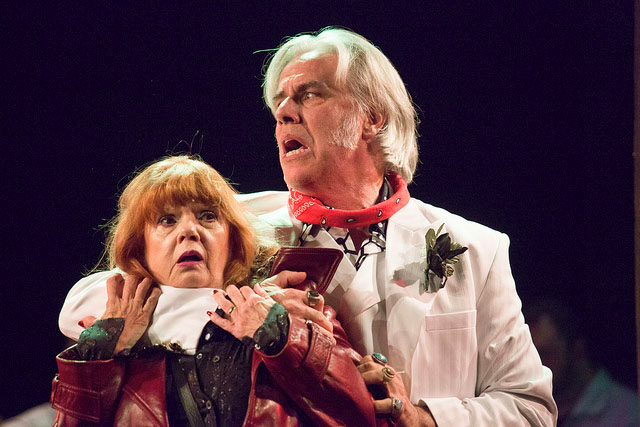 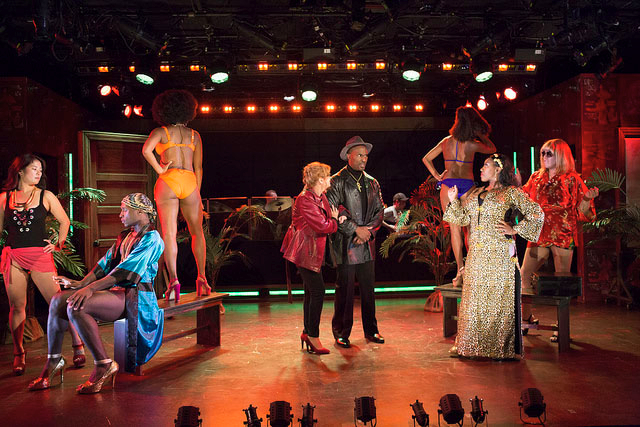 A cat house in Venezuala. 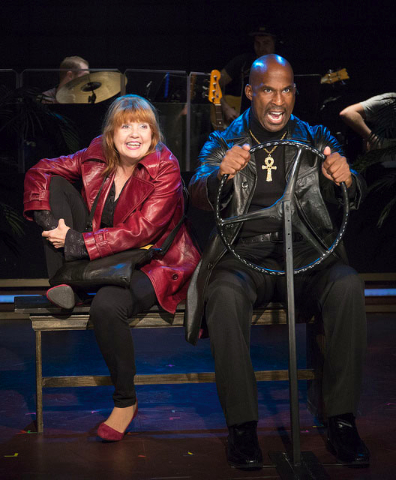 Annie and Alan H. Green in his sweet ride. 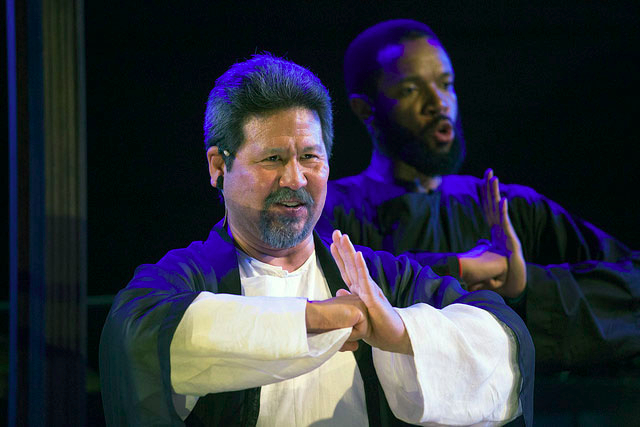 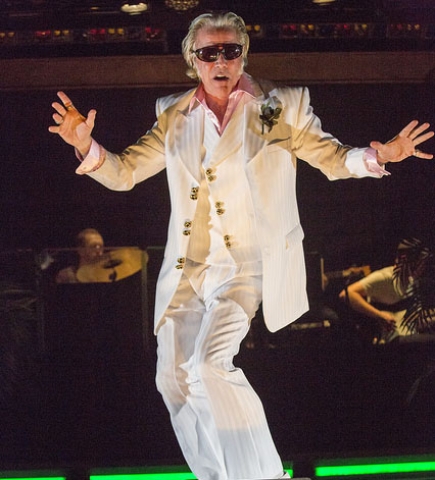 McCarthy is over the top as fugitive Mac Rountree.

The raucous world premiere of  Broadway Bounty Hunters at Barrington Stage Company is a caterwauling, titubating, soulful musical that packs a wallop.

It is a vehicle for the fabulous Annie Golden who at 64, playing herself, is amazingly cute, charming, feisty and galvanic. By the end of a two hour, two act evening you just love her to death.

It’s been a long time since her breakout role in Hair, back in 1979, but, my goodness, she still has the pipes to belt out a song. You will also recognize her from the award winning ensemble of the TV series Orange Is the New Black.

For the past few years she has been appearing in the cabaret performances of Joe Iconis. Now he, with Lance Rubin, Jason SweetTooth Williams and choreographer, Jeffrey Page, have created a setting in which she is the jewel in the crown.

With a cast of twelve the intimate St. Germain Stage is cram-packed. There isn't much of a set but an extensive use of props in the design of Timothy Mackabee. The kick ass six piece band is visible at the back of the stage. Full use of the small theatre is made with the second act commencing with the rousing "Master Shiro's Bounty Hunters." The audience swivels about to follow the actors in the aisles and behind them. There is playful banter as a bean-pole-thin pimp outs individuals with comical eye contact and taunting invective.

This is a show with legs. Based on the wild enthusiasm of last night’s audience it is a terrific show bound to hit the road. As the title implies, with staging expanded and tweeked, it has the potential to be Broadway Bound. Hey folks, it’s that good. Trust me.

The back story is that it faltered breaking out of the gate. Things just weren’t going well with the director. When she was let go artistic director Julianne Boyd jumped in and with just two weeks whipped this show together.

Currently, the first act runs a bit long. Overall the show can be tightened for prime time. But with deft legerdemain Boyd has evoked the best from a fabulous cast. From the featured players to members of the ensemble these are folks to keep an eye on.

Alan H. Grenn (Lazarus) has star power to the max. He is taking a break from Broadway's School of Rock to return to Barrington Stage.

The action begins with what may well prove to be a standard Golden's “Woman of a Certain Age.” It is just one of a number of songs that had you leaving the theatre whistling a happy tune. They just don't make musicals like this anymore.

With a head shot that is a bit out of date Annie is part of a casting call with women half her age. With a kiss kiss from the director (George Salazar), and where have you been all these years, she is given the brush-off.

While youth must be served it is a fact of life that there isn’t much material for women of a certain age.

As an aging actress Annie has slim prospects of paying the rent or putting food on the table. Alone in her flat she converses with the framed photo of her deceased husband and fellow thespian Charlie. He drowned, or so it seems, a decade ago.

The ersatz Samurai Shiro Jin the wonderful, rich voiced Scott Watanabe, has a better idea. He is the martial arts master of a band of bounty hunters. With an improbable twist he will train Annie and send her on an important mission. This is greeted with consternation by his gang of ninjas.

There is a magnificent, voguing entrance by the tall, handsome, superbly fit, tower of power Lazarus. In one of many fabulous costumes by Bobby Frederick Tilley he is tricked out in a superfly, pimp outfit including a feathered lid.

He is Shiro’s numero uno bounty hunter who is pissed to be saddled with a partner for an assignment in Venezuela. This is spelled out in “Shiro’s Proposition.” The target is amusingly identified in “Mac Roundtree Theme Song.”

It seems that the fugitive murdered Shiro’s twin brother. He has a unique scheme to lure him in  using Annie as bait.

Late in the first act we meet Mac Roundtree in yet another, show-stopping Barrington stage performance by the ever versatile Jeff McCarthy. Last year he was the lead in Man of La Mancha. In a totally different role he is a glittery grifter in shades with rings on all of his fingers.

He has a brief case full of a super elixir which gives phenomenal stamina to Broadway performers. Hooked on his drug they can double their weekly performances from eight, the norm, to the box office bonanza of fifteen. It will earn the pusher a tidy fortune.

Under cover in Venezuela the on the lam Roundtree runs a brothel. This provides fodder for some over-the-top hoin. The hookers are stripped to bikinis with variations of bump and grind of the sex trade. Some of the moves and lyrics make one blush. One wondered what the donors thought of that?

During intermission, belting on a hip flask, a funky lady repeated that line. Good grief!

By the time they drive to Venezuela in his ‘sweet ride’ not only have Annie and Lazarus bonded but there is romance in the air.

The action accelerates when they catch up with Roundtree including lots of twists and turns. There are fight scenes choreographed deftly by Ryan Winkles as well as terrific dance sequences.

We won’t spoil the fun by spelling out how this all comes to a conclusion. Suffice it to say that for once a stomping and cheering Standing O was richly deserved.