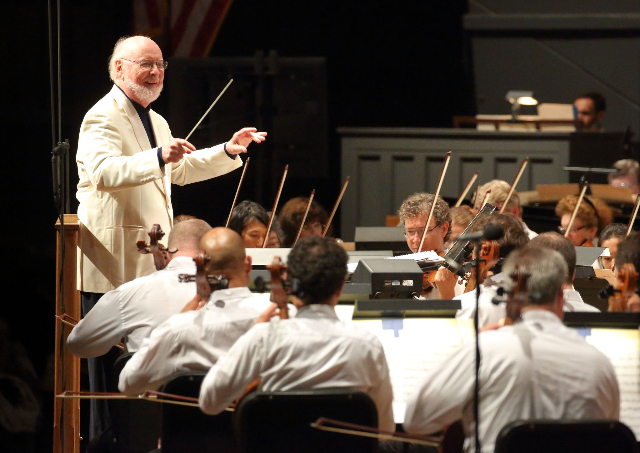 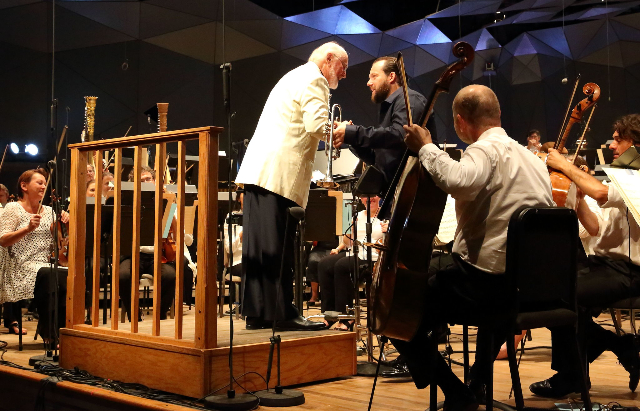 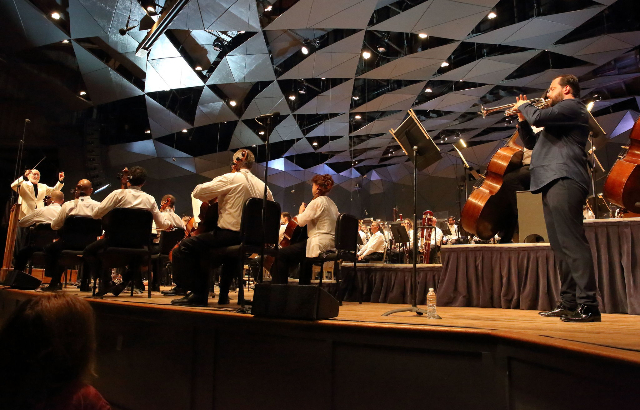 With Andris Nelsons sharing  conducting with John Williams,  as well as a trumpet solo,  there was a capacity audience of 18,000 at Tanglewood for the annual Movie Night.

On a perfect evening there was a capacity turnout on the lawn and in the Shed. That is on a par with James Taylor numbers as were massive traffic jams before and after the concert. Arriving the usual half hour early we barely made our seats on time.

Now 85 one treasures each appearance by the renowned composer/ conductor who has put his mark on the film classics of our adult years.

Before Keith Lockhart and after Arthur Fiedler he conducted the Boston Pops. The annual Film Night is an aspect of his long commitment to Tanglewood and the BSO.

If the capacity turnout is any indication Berkshire audiences never tire of the enchanting evenings he has created in Lenox.

Somewhat shakily climbing to the podium to a sustained ovation he turned to the audience and sent back the love stating how wonderful it was to be back as such a “magical place?

In the past there have been educational evenings. Particularly memorable was the occasion when he demonstrated the process of creating scores to enhance films. An exciting passage of Indiana Jones was shown as initial footage and then with musical accompaniment. He explained what the scene required.

Last night there was more of a no frills approach.

During the first part of the program with Nelson’s conducting there was an amusing montage of fencing scenes and pirate battles to the music of the Williams score to the Duel from “The Adventures of Tintin.” It was not his most familiar refrain but it was great fun to recognize so many Hollywood stars in scenes with stunning commonalities of directorial tropes and sight gags. On old film sets plagiarism was not a dirty word. The notion of originality came with post modernism.

We much enjoyed the clip with a young Frank Langella in “Dracula.” It recalled the lunch we enjoyed with the arrogant star at the Ritz Carlton in Boston. He was then a leading man and now is primarily cast as a character actor. And how.

There have been four films based on the character Indiana Jones played by a now not so young Harrison Ford. Despite an injured foot Williams said that he has signed on for a fifth film in 2020 with Lucas and Spielberg. The audience applauded with encouragement when if, God willing, he teams up with the old gang.

At his advanced age, while still going strong, it’s not a good idea to plan so far ahead.

When he introduced the score for “Lincoln” the award winning Spielberg film that starred Daniel Day Lewis he announced a special guest artist. To the delight of the audience the trumpet solo was performed with dispatch and panache by Nelsons.

Having performed five of his scores as his half of the program he returned with encores of  "1941," "Schindler's List" and "Star Wars."

His remarkable generosity and stamina is beyond compare.

Yet again he demonstrated why his music has been an integral part of so many iconic movies.