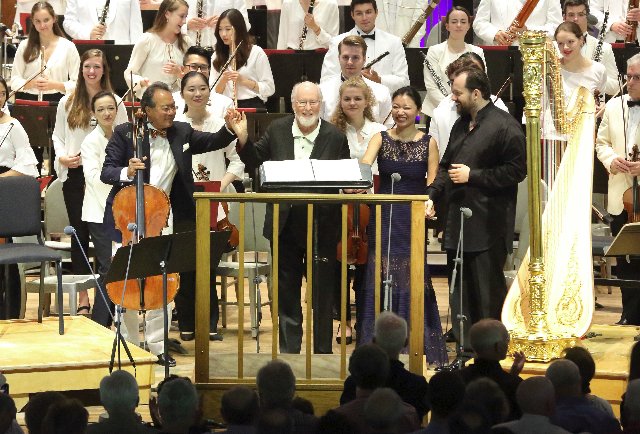 Beautiful weather, a packed house and anticipation in the audience for an exciting Sunday afternoon concert that featured crowd favorite, cellist Yo Yo Ma. The audience was the recipient of a world premiere  by composer John Williams.

Andris Nelsons led the Tanglewood student orchestra for the Sunday afternoon program in  the Koussevitzky Shed.

The new piece, ‘Highwood’s Ghost,’ was written because, on one occasion, Bernstein believed he encountered a ghost at Highwood, a property owned on the Tanglewood campus. Legend has it that a ghost resides in the building.

The piece was the focus of the afternoon.

Yo Yo Ma is well known for taking on difficult and challenging works as was this one. It was daunting, haunting and challenging for him. Unlike Williams' brassy numbers, this composition was all about the dark side. Squeals and squeaks were emitted in machine gun fashion from his cello. Each note was mysterious and seemed to mesmerize the audience,

The composition was unlike any other Williams works. It wakened  the ghost of Bernstein letting him know that he is still alive in our minds-one hundred years since his birth. The audience was on the edge of their seats, waiting for him to end the number. He held his bow in the air, seemingly for minutes, before he tapped a string. There was a air of mystery that arose from the composition, one that will long be remembered..

The crowd roared with enthusiasm as the number ended. Williams took a bow and-for that one moment- the audience had a spiritual experience.

.
The work by Bernstein had a tone similar to that of the piece by Williams. Magical and haunting, it was performed exquisitely by Ma.

After intermission, Andris Nelson’s led the Tanglewood students in a ravisning rendition of Bartok’s ‘Concerto For Orchestra.’  The concerto was also somewhat haunting, complex and challenging. The five movement piece was composed in 1943. It premiered with the  BSO at Symphony Hall. It is regarded as one of his best-known, popular and most accessible works.