Mothers and Sons by Terrence McNally

A Fabulous Production at Shakespeare & Company. 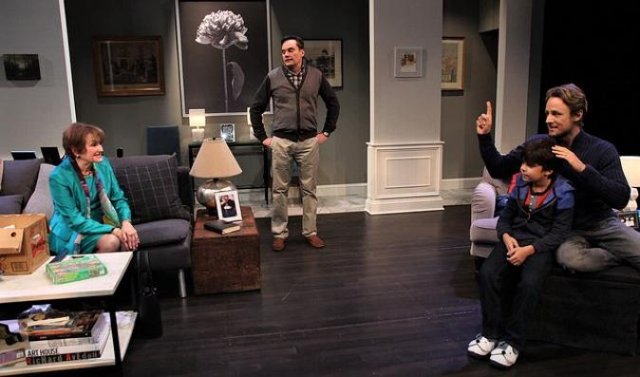 The compact, one act, 95-minute play by Terrence MeNally is superbly crafted. With sharp, snarky dialogue it explores the depths of love, loyalty and devastating loss. There are measured doses of hate, remorse, regret and guilt. There is a devolving spiral of ever greater spite and division. Stripped to its raw essence there seems no resolution or redemption until a whimsical, innocent, inventive ending that catches us by surprise with a tiny glimmer of hope.

From beginning to end we were stunned and riveted by twists and turns on a collision course toward chaos and oblivion. The play is skillfully directed with a firm hand on the tiller navigating rough water by the director James Warwick. He evoked the emotional potential of every line of dense, tight text.

At his command Warwick was blessed to have Annette Miller, the diva of Berkshire theatre, in the pivotal role of the vengeful, angry, loveless lady of a certain age, Katharine Gerard. Her commanding, nuanced, resourceful performance brought the very best from those interacting with her. The laser intensity of her invective provided the speed and intensity of return volleys and winners. Not just with vocal projections Miller has a formidable tool box of body language. She can cut down opponents without so much as giving them a glance.

Unannounced, with an excuse to return an item, she has somewhat reluctantly been invited into the high-rise, Central Park West apartment of Cal Porter (Bill Mootos). It has been some 20 years since they last met at the funeral of her son Andre, and his former lover, who died after harrowing hospice for AIDS.

Ostensibly, the opportunity for an impulsive visit is a connecting flight in New York for Christmas in Rome.

In one of many arguments Cal states that it was not a “funeral” her term, but rather a memorial service. As the final of many insults and snubs, on that occasion, she had refused to embrace or even acknowledge him. The devastating loss, she insists, was entirely her own.

Through a litany of long held misconceptions she believes that Cal killed Andre by giving him the disease or that he made him gay. Neither of which is true. As their dialogue unfolds., by cheating, it was Andre who put Cal at risk. As a conservative and narrow minded parent she never understood that Andre had been gay long before the six years he lived with Cal.

Another of her arsenal of zingers is that Cal thought so little of Andre that he married Will Ogden (David Gow). Deeply hurt and insulted Cal counters that he was alone and “learning how to make money” for some eight years. Ultimately, his loss is no less than her’s. He was there through the horrendous final phase of the disease while she failed to come to the bedside. In the end Andre, emaciated and ravaged, was not the handsome son she remembers.

The pace of the drama was well handled. There was that initial phase of forced pleasantry. This entailed an introduction to the elegant space and its views of the park (crisply designed by Patrick Brennan). There is benign patter about The Met. On one side of the park a museum and on the other an opera house. It is a signature of McNally’s mastery that he intersperses chit chat and small talk with venomous zingers.

In those exchanges, when warmed up, she is on the attack and he ups his end with ever more potent defense. There is a sense that he is a fair, moral, measured and decent human being in every sense that she is not.

At first, she refuses to relinquish her fur coat as she does not intend to stay long. When it is finally surrendered she makes a nervous remark to please ignore that the label says Neiman Marcus. A long time resident of Dallas she remarks that her deceased husband had a fit when she bought the expensive coat. With a stifled laugh, Miller a master of diverting moments, explains that it came from a recycling shop.

It is a part of an unraveling of every aspect of her assumed social status. She describes herself as from upscale Rye. Of course Cal knows it and playing along acts impressed. With further exposition  it is revealed that she grew up poor on the other side of the tracks in Port Chester.

She saved money to buy the dress to wear to a dance at the Rye country club. There she met and eventually married a man she never loved “without even getting knocked up.” That came later and resulted in Andre. The how and why of her love for him is complex. She confesses to Cal that she secretly aborted a second pregancy. There were affairs with married men. During one of these she bragged in a phone call to Andre that men stll desired her. The language was more raunchy and shocking coming from the matronly actress.

As a young adult Andre moved to NY for a career in theatre. Cal wants to give her a poster of him starring in Hamlet. It’s too painful for her to even look at. He offers the chance to go through and keep items from a box of his memorabelia. There are comments about vintage photos, some from summers in The Pines, a gay enclave on Fire Island.

Their exchange is going nowhere when Will Odgen (David Gow) enters from a walk in the park with their son Bud Odgen-Porter (Evan Miller).

The immediate tension is palpable. When she exits for “the little girl’s room,” seemingly taking forever, he demands to know what ‘that woman’ is doing in his home. She rejects that term saying that an apartment is not a home. Will insists on precise language particularly as a parent. He berates Cal for using the term "Eskimo" when he should have used the p.c. Inuit.

Will zings that people move to NY apartments precisely to avoid people who just drop by. You may casually visit suburban neighbors but in Manhattan one does not arrive without an appointment.

Between demands of attending to the boy, the momentum changes as Will joins the dialogue. He has none of the tact of Cal and no connection to Andre whose memory he respects but resents as a deceased rival.

In the language of another age she wants to know who is the father? They answer “we both are.” That shifts to who is the biological father? That’s Will.

We get another take on gay marriage which did now exist for Andre and Cal. A difference for Will is that they didn’t grow up together. The significantly older Cal came fully formed, financially secure, and willing to commit to the family that Will wanted.

An aspiring novelist Will writes and is a stay at home dad. Katharine wants to know if he has written anything she might have heard of. "Not yet" is the answer.

Given the overall grim tone of the play it's rather hilarious to hear Will on the joys of marriage and parenting. He recounts the thrill of every phase of making a baby. Some fifteen years younger than Cal his sperm fertilized an anonymous donor egg which was implanted into a surrogate mother. She was a lesbian friend. He recalled the fun of prenatal visits in the waiting room with other gay and natural parents.

The boy is a miracle and uncanny delight. He is fun and curious. It shocks her that he is entirely natural with his two dads. She wants to know what they will tell him? It’s typical of how wrong she is on every point with so much to learn in one compact act.

Will has no patience for this intruder and observes that her most frequent comment is about things she hates.

Indeed Katharine is hateful in every sense. More importantly, she is a lonely woman who has never known love. So the loss of Andre, the one potential love that she utterly mismanaged, is all the more devastating.

At the end of an exasperating, unproductive visit, Cal blurts out that she is mourning one loss while he and his friends lost an entire generation.

That appeared to be a remark from which there is no recovery. But then.

There was everything to like about this insightful play and its amazing performances. It is a masterful highlight of what has been a remarkably diverse and rewarding Berkshire season.