The Tsar's Bride at Bard Summerscape

The Pleasures of Rimsky-Korsakov 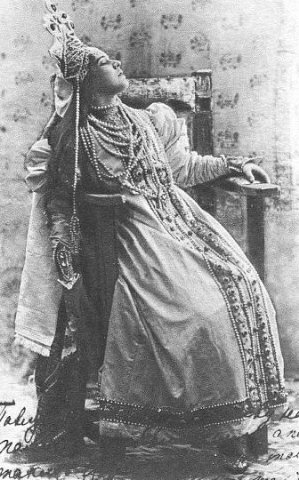 Bard Summerscape concluded its 2018 season with a production of The Tsar’s Bride by Rimsky-Korsakov.  Often performed in Europe, the opera is unfamiliar to many opera lovers in the United States, who received it at the Fisher Center with rapt admiration.

Rimsky-Korsakov wrote many operas based on fairy tales, but he also tackled complex psychological dramas rooted in history. Mozart and Salieri is based on a poem by Alexander Pushkin which explores 'envy.'  The Tsar’s Bride is based on a play by Lev Mey which investigates an historical event during the reign of Ivan the Terrible, who we would come to know well in Sergei Eisenstein’s film. The Tsar's third wife died shortly after the marriage.  Why?

The Tsar appears only briefly in the opera, but he hovers over it, an ominous presence in a world dominated by corruption and oprichniks, the palace guard goons.

One of them, Malyuta, is sprawled on a bench center stage at the start of the opera.  He is clearly a thug and Yakov Strizhak is terrifying as a presence. If the various poisons and potions Dr. Bomeliy concocts don't do the job, Malyuta is there to back them up with sheer force.

Tiered benches dominate the stage. Doug Fitch designed them and then uses the benches to focus the action. Characters move up and down, and in and out to keep the action going, and to emphasize roles when they come to the fore. Fitch also directs, which is no simple feat. He keeps the many story lines clear while advancing the multi-dimensional plot. The opera unfolds in an abstract world, very much centered in reality.

Curtains covering only a small portion of the stage drop as the story progresses and then rise again to drop in a new location.  Often they are used for the subtitle projections.  Background projections portray ubiquitous white birches in changing light as day passes to night. Iconic Russian images also add color.

The largely Russian cast has been appearing throughout Bard’s presentation of Rimsky-Korsakov and His World.  Basses are of particular note, exceeding those we've heard with the Marinsky company.  All the singers are worthy.

Marfa, the daughter of a Boyar, is desired by every man who sees her. Her choice is Lykov sung by tenor Gerard Schneider. The beauty of his voice is deserving of love. Efim Zavalny as Grigori also wants Marfa, but to get her, he must abandon Lyubasha, who is prepared to poison the competition in order to keep her man.

Nadezhda Babintseva takes on the role of Lyubasha made famous in this country by Olga Borodina. Baintseva is a magnificent successor, displaying a range of voice and texture.  She draws us in emotionally and then spits us out as she determines to wreck vengeance on her deserting man.

Rimsky-Korsakov wrote the opera for a soprano, Zabela, with whom he became entranced. Sending the second act aria he composed just for her, he expresses fear that she won’t like it. She loves it, as we do when it is sung by Lyubov Petrova, an engaging figure who has a heavier lyric than usual.

Zabela writes the composer that he sounds blue, and hopes he will try to live in F major. He replies that E flat is probably as good as he can do. He is after all not an F major spring chicken.

Audiences loved this opera from the start, but fellow composer's, including Rimsky-Korsakov's wife, did not.  His wife called the opera trite.

Olga Kipper, Chekhov's leading lady, wrote the author: “What wonderful, subtle and elegant music.” Tolstoy and Rimsky once had a conversation in which Tolstoy adamantly argued that art need not be beautiful.  The Tsar’s Bride is one of the composer's answers to this conundrum. It falls clearly on the side of beauty.

Later Mrs. Rimsky-Korsakov would come around, and note “the wonderfully written recitatives, the highly dramatic fourth act and perfect orchestration with a rare interlacing of talent and great skillfullness. The orchestra expresses beautifully not only the state of mind of the characters, but the emotion in their hearts."

The production conducted by Leon Botstein left the audience with very much the same feeling, a sumptuous afternoon of opera at Bard.