Georges Bizet with Libretto by Eugène Carmon and Michel Carré 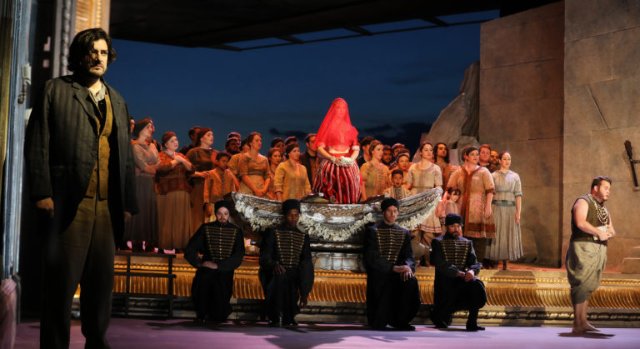 Many operas have suffered a rocky road to recognition and appreciation, The Pearl Fishers, among them. Yet when one considers its virtues, it is hard to understand why. With a beautiful and melodic score, an exotic setting, and a love story immersed in tragedy, what’s not to like? Perhaps the Paris critics of 1863 were simply unwilling to accept that the 24 year old composer Georges Bizet could be deserving of their adulation. Fortunately, wiser folks, most notably the esteemed Hector Berlioz, became unabashed advocates, though the opera would still fall into obscurity for decades.

Even today, many consider it a guilty pleasure – perhaps it’s too attractive. But one set piece alone makes it worth the price of admission. For how many music lovers is “Au fond du temple saint” their favorite tenor/baritone duet in the opera repertory? This “friendship duet’s” achingly gorgeous melodic strains and lush harmonies grip the emotion and live on in the memory. And Bizet knew what a robust theme he had, as he repurposed it several times throughout the action, with variations led by different instruments. And in the end, the soprano gets to share in its glory as well.

The Pearl Fishers (Les Pêcheurs de Perles in French, the language of the libretto) takes place in a fishing village in Ceylon. Zurga, head of the fishermen, welcomes his best friend, the hunter Nadir, back from an extended absence. They renew their vows to never let a woman come between them, as had happened in the past. A priestess is brought in to protect against storms that would damage the fishermen’s catch. Of course, it is the veiled Leila, who had been the object of their previous affections and discord. Emotions between Nadir and Leila crackle, leading the three main characters and the village down the road of calamity.

Among the opera’s unusual structures, it contains only four principal roles. Yet it is far from a chamber opera, as the oft-used chorus creates a visual and aural bigness for the grand stage. In fact, the composer endows the chorus with fine music and involves it at many of the crossroads of the drama. Since the chorus is comprised of accomplished solo artists, the outstanding summer apprentices of the Santa Fe Opera, its output is exemplary.  A full orchestra provides rich sound.  Bizet employs the instrumentation wisely and spreads the solos and other highlights broadly, including “close-ups” for flute, oboe, harp, brass, and more.

Vocal highlights abound as well for each of the main characters in arias and duets, all of which can be found in online videos. Three with thematic connection to seek out are Nadir’s “Je crois entendre encore,” about his undiminished (but as yet unreturned) love for Leila; Leila’s “Me voila seule” about her newfound love for Nadir; and Zurga’s “O Nadir, tendre ami,” about his friend’s betrayal as a result of Nadir’s pursuit of Leila.

The finest and most consistent singing performance was Anthony Clark Evans as Zurga. He handled the lyric baritone elements of the role with great aplomb, and his timbre melded well with the tenor in “Au fond du temple saint.” Playing Nadir, tenor Ilker Arcayürek’s voice was thin from the outset, and while it did strengthen in time for the grand duet, it was a bit underpowered throughout. Soprano Corinne Winters had difficulty at first finding accurate pitch. She largely corrected and found her lyric and coloratura qualities, but occasional small lapses continued through an otherwise commendable rendition. Both Arcayürek and Winters offered commanding presences which enhanced their portrayals. The remaining, smaller role is that of the High Priest Nourabad to whom Leila must answer. Robert Pomakov provided an unswerving, menacing account of the glowering character.

The stage production led by Jean-Marc Puissant’s sandstone colored depiction of the deteriorating temple reflects the environment of the action adeptly. The magical extra bonus in this case is the open back wall of the stage, a Santa Fe Opera specialty. The twilight sky behind seems a natural extension of the set and the seaside that it represents. It even adds size and functionality to the stage as mechanisms behind the stage facilitate arrivals and departures of boats that carry the principals.

Given the music and dramatic appeal of this opera, one wonders how it ever fell out of the repertory.  Productions like this one should ensure that it stays where it belongs.

The Pearl Fishers, composed by Georges Bizet with libretto by Eugène Carmon and Michel Carré, is produced by Santa Fe Opera and plays at its opera house at 301 Opera Drive, Santa Fe, NM through August 23, 2019.