The Arts and Black Lives Matter 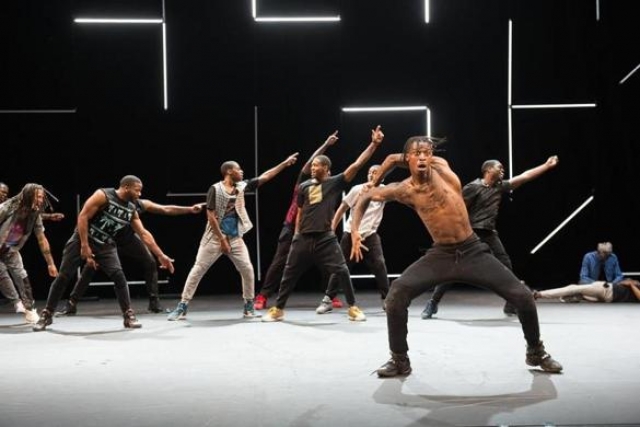 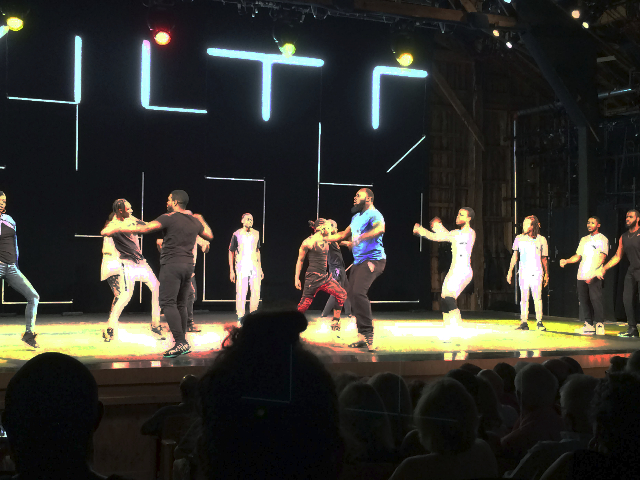 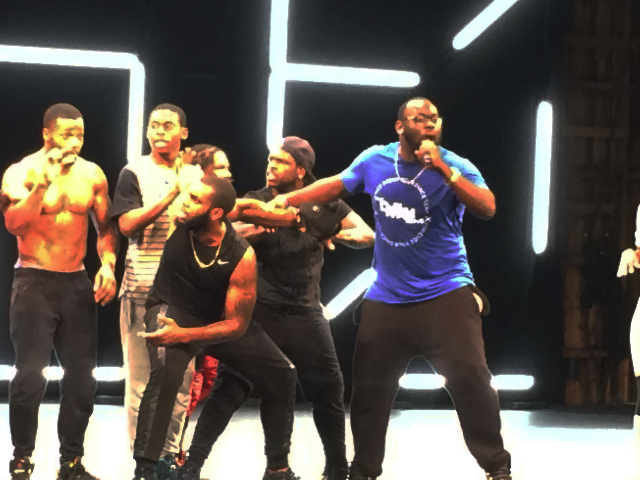 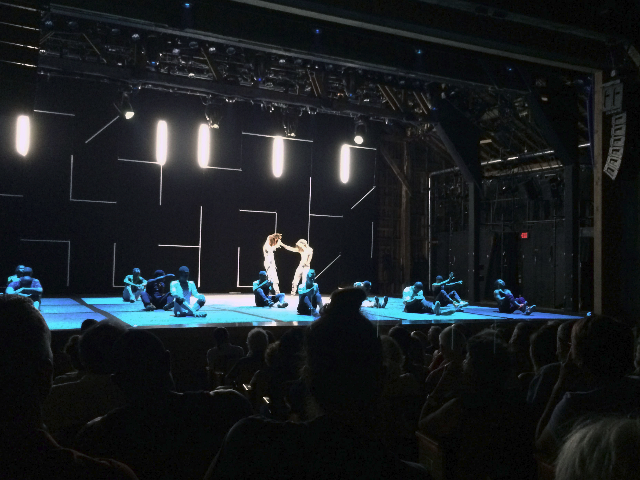 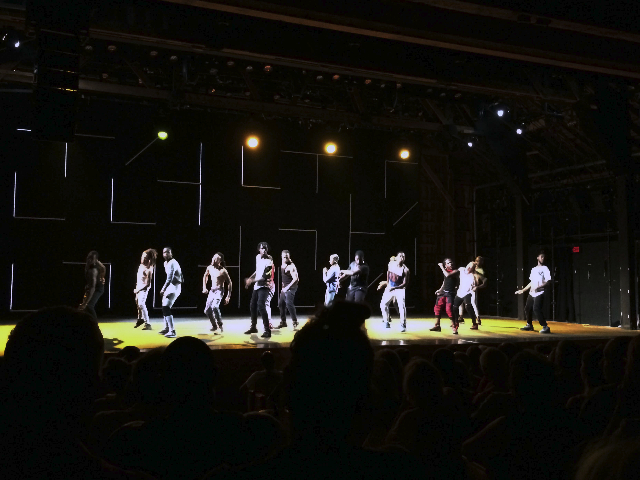 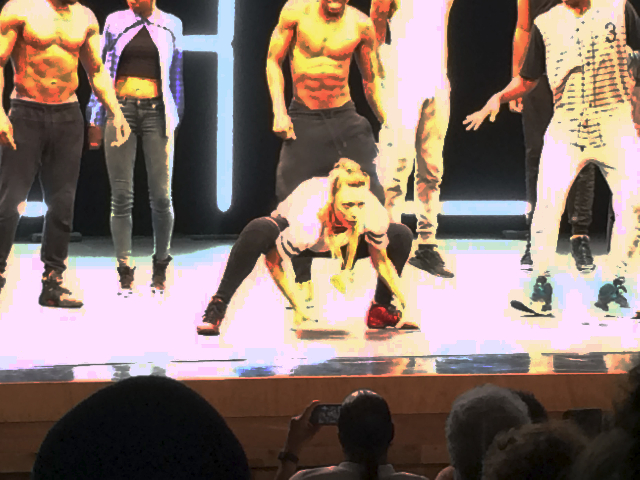 The legacy of slavery, racism, hate and genocide continues to roil America. It manifests in the murder of black youth by cops, retaliations, gang wars, and victims including children who are caught in the cross-fire.

In a fusion of indigenous street dance that evolved from Brooklyn's  Jamaican club scene and the Black Lives Matter national movement informed the creation of the dance company Flexn.

It was spawned by Rocky and Sandra Cummings in the early 1990s evolving from Flex N Brooklyn a cable-access show. In addition to coordinating a diversity of inventive moves, primarily evolved in local dance competitions, early on it became a vehicle for dialogue and responses to violence from within and directed upon the community.

Initially, as Regg Rock told us it was just about winning. It focused on inventing and competing with unique moves. He would later demonstrate his unique move, Pauzin, which is like hitting the hold or pause button when watching a video. That creates a staggered image translated by a shake movement. This conveys the idea of slowing down and absorbing the intake of information.

The notion of dance competitions moved forward through collaborations with Peter Sellars which molded individual improvisations into a series of vignettes creating an arc and cohesive narrative. This ranges from explicit mime movements and more abstracted passages through contortions of the body.

More than providing performances Flexn has a mandate to communicate, educate and provide expression to  young people under attack. This vivid acting out of violence  facilities understanding, and self reflection. It  is an energy force for transition into adulthood.

In addition to the ninety minute suite of 14 vignettes there was a half hour of panel discussion that preceded it and a talk back that followed.

The panels varied with each performance. For the Saturday matinee it was moderated by company founder Reggie “Regg Roc” Gray and Charlotte Brathwaite.  He provided an overview of the company and some of the major innovations such as Bone Breaking, Gliding, Get-Low, Hat Tricks, Waving  and Pauzin.

The Honorable Jay D. Blitzman, First Justice, Massachusetts Juvenile Court, Middlesex Division, offered a litany of statistics for youth of color as more likely to drop out of school, do time and become victims of gang wars and incidents with police officers. He discussed counter movements within and tangential to the criminal justice system.

Dennis Powell, the President NAACP, Berkshire County Branch, talked about reacting to seeing a black child standing on a milk carton in order to be finger printed. He talked about the importance of not just listening to afflicted young people but hearing what they have to say. He talked about growing up and being told to "move along" by police officers. Now youth are asking "Why? I'm not doing anything wrong and that's the problem."

A graduate of Simon’s Rock, Gwendolyn Hampton VanSant, talked about her initial excitement of matriculating to the college and almost immediate disappointment and estrangement.  She now works with the college and talks about “circling” when incidents occur. This entails equal voice, listening to each other, not interruption and working through instances of racism on campus.

The moderator informed us “This is the part of the program where you are told to turn off your cell phones. But we want you to turn them on, take pictures, text and send e mails. If you see something you like cheer, stomp and shout out. We like that.”

We were seated for the 2 PM matinee and in what proved to be a two hours plus event, with no intermission, the actual performance commenced at 2:40 PM.

The first hour of the performance was galvanic but an assault on the senses. The volume of a mix of music was blast level. That was complemented by  glaring light patterns of the Dan Flavin-like arrangement of fluorescent white tubes designed  by Ben Zamora. They were lit to form sequences and patterns.

The dancers responded directly to the beat and lyrics of selections by Kanye West, Eminem, Andre Dre, and Don Redman among others. In the scenes of death, grief and mourning the mood of music softened and changed with lyrical impact.

The mix was a direct artistic connection with social dialogue. What we saw reflects Brooklyn and other communities of color but is unfamiliar to mainstream America. Yet again racial, political and economic adversity inspires American culture from jazz and blues, to rock, soul, rap and hip hop. There is always a transition from vernacular to high art.

When jazz became too cerebral and lost contact with its base there was a reconnection with new forms of street music and entertainment. Along the way jazz was undermined by being rebranded as black classical music. Miles Davis saw that and reverted to connecting with the cutting edge music of Sly Stone and later hip hop influences emerged in albums like On the Corner.

We were vitally charged by the freshness, improvisation  and immediacy of the Flexn experience. There were stories being told but the vocabulary of movement and mime was not immediately accessible. It was crystal clear when we saw someone shot but more difficult to understand the message of Bone Breaking or Gliding.

With its mix of accessible, narrative elements and complex abstracted moves companies evolving from indigenous and vernacular forms represent some of the most fresh and challenging contemporary art. That sense of the avant-garde is more palpable than what we are exposed to. Perhaps if one attended fringe festivals or off off Broadway one might find an equivalence in theatre and performance art. Only Jacob's Pillow regularly brings that sensibility to the Berkshires.

There is the immediacy of silent and abstract movement in contemporary dance which is often impossible to transform into words. Dance writers rely on the vocabulary of  classical movements. There is no updated lexicon for Flexn moves.

Without that vocabulary we focus on the visceral impact of Flexn and a gut response to why Black Lives Matter. We were concerned with what happens to these gifted artists when not on stage and touring the world.

When we see depictions of arrests, incarceration, courts, cop killings, gang slaying, rage and mourning how many of those incidents directly relate to the dancers?

Yes, the moves are spectacular. There were segments that featured individuals with personal-best moves. We got a vivid sense of the artistic personas and skill sets of dancers. There was a range of body types from muscular and thick set to skin and bones. Of the sixteen dancers three were women and one of them caucasian. They were  seen individually and in romantic partnering. The women added another dimension to the range of possibilities but it was, overall, a machismo driven experience.

There is a sense that tricks and stunts are ever evolving. They are only as good as today and will be challenged tomorrow. That is a part of the nature of ongoing competition and what removes it from modern dance and its choreography.

While Sellars has provided a structure and staging for the set pieces and themes, within them, there is room for improvisation. It’s like a bop musician  playing the chorus of a standard and then blowing riffs over, around and through it.

At the one hour mark, however, I hit the wall. There was a powerful segment about breaking the chain, an illusion to slavery, then an element in which the company lay “dead” as though there was a mass execution.

That seemed to be a climax but the dance continued  beyond an ability to absorb any more. There was just too much information and the impact elided into overdose and aesthetic fatigue.

It seemed to end and then it didn’t. Another fifteen minutes of encores reverted to freestyle. There was no more attempt at thematic content. The dancers were off the hook and showing their stuff. It proved to be fresh and reenergizing.

They knocked home the notion that Flexn is “part protest, part dance party, and part collective autobiography.” That’s right on and saying a lot.