Things You Shouldn't Say Past Midnight 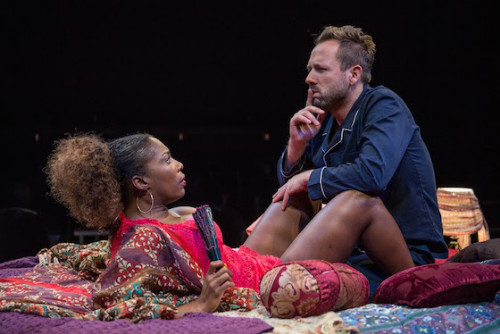 Three couples, three bedrooms and a conference call. That's the scenario. It's two hours of pillow talk (and pillow shouting) among people who are trying to get their needs and desires met, but keep running into complications. Things You Shouldn't Say Past Midnight, the new sexy comedy at the Windy City Playhouse, is a comic farce with a coarse edge. Noel Coward it isn't.

The two-hour play from the script by Peter Ackerman is funny and vulgar but the vulgarity is all verbal; the actors are in some stage of love-making under the covers, but there's no nudity. Director Peter Brown tightly directs the six actors and their timing is perfect throughout. The funny lines pop and snap.

The drama starts in the first bedroom where Nancy (Emily Tate) and Ben (Peter Meadows) who have been going out for six months, are in the throes of copulation. She screams out instructions to him, including "Do me, do me, you hooked-nose Jew." His reaction is "What? What did you just say?" The passion is over and their conversation turns into an argument as each accuses the other of not understanding. At one point, Ben demands, "People say what they don't mean all the time, you know? It doesn't mean it's true. I could say I'm straight and really be gay."

Meanwhile in another bedroom, Gene (Shane Kenyon) has put on his nicely tailored pajamas and is ready to sleep with Grace (Parese McClain), an academic with a taste for nasty sex. But first he'd like to talk. Gene yearns for culture so he wants Grace to talk to him. She only wants to romp with Gene.

The three couples are drawn together when Nancy arrives at the apartment of her friend, Grace, for consultation about Ben. Could he be gay? Grace decides the only solution is to call her therapist for an expert opinion. Thus we have six people on a three-way conference call.

My favorite characters are Gene and Grace. He's Clean Gene, the mob hitman, whose nickname derives from his fastidious cleanup after he completes an assignment. He regrets that he didn't go to college and admires Grace's intellect as well as her body. At one point, he asks her to tell him about art. She tells a clever story about how a shoe can go from being footwear to being displayed as art.

Gene is a bit trigger happy and ready to defend Grace when he hears an intruder. (It's only Nancy, but it is 3am after all.) I particularly enjoyed seeing Kenyon in this role since the last time I saw him on stage was as a serious Islamic cleric in The Who and the What at Victory Gardens.

Brown's directing is spot-on and his actors handle the fast-paced dialogue very well. The production takes full advantage of Kevin Depinet's scenic design, which uses the extended WCP playing space to angle bedrooms at each end with one in the middle. Jesse Klug's lighting makes the scene changes and the telephone interchanges work.

This is Peter Ackerman's first play; it ran off-Broadway for six months in 1999. He adapted the play for a 10-episode TV series that ran on DirecTV last fall. Ackerman also works as an actor and voiceover actor.

Things You Shouldn't Say Past Midnight continues at the Windy City Playhouse, 3014 W. Irving Park Rd., through October 4, with performances Wednesday through Sunday. Tickets are $20-45 and can be purchased online or by calling 773-891-8985. As a theater critic, I have sat through (and loved) many storefront productions seated on excruciatingly uncomfortable folding chairs and benches. The Windy City Playhouse gets four stars for its seating and lobby amenities.