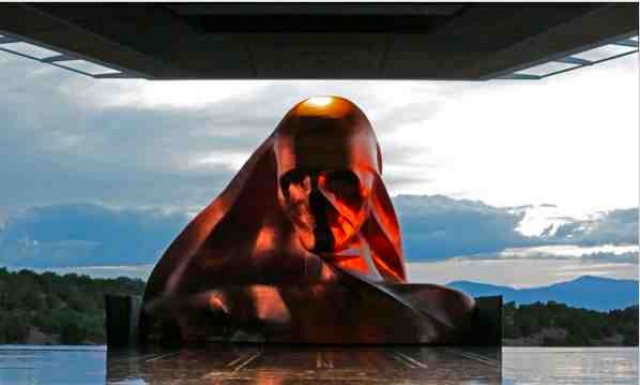 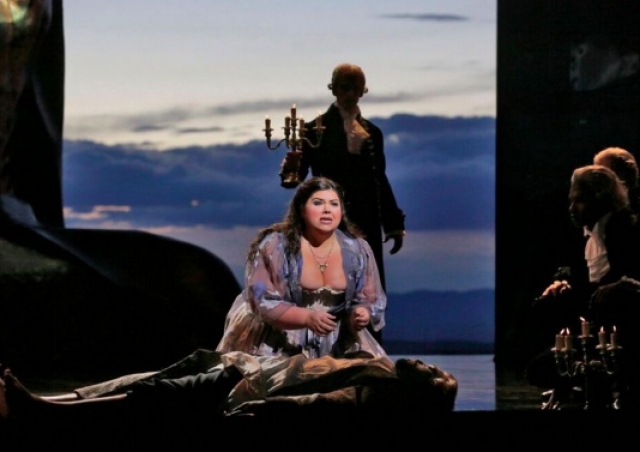 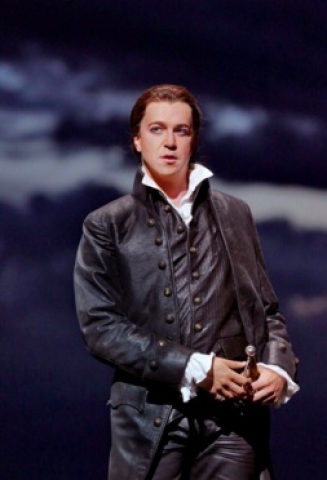 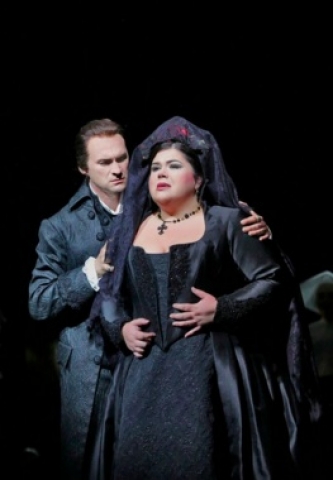 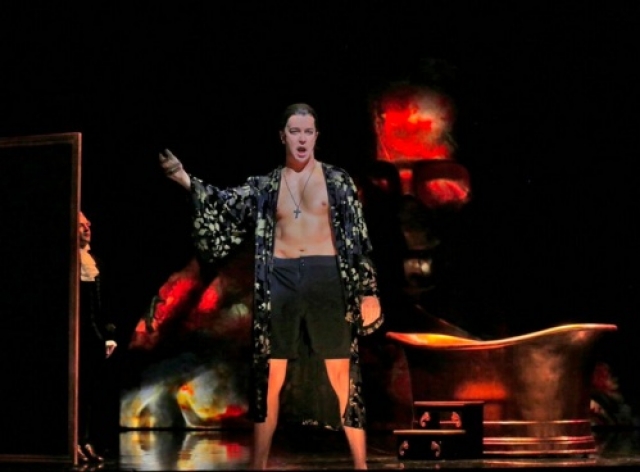 Even a bath doesn't cool the Don down. 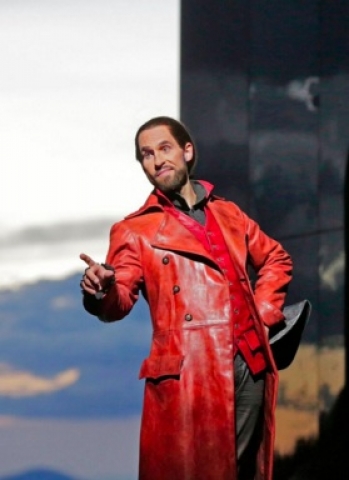 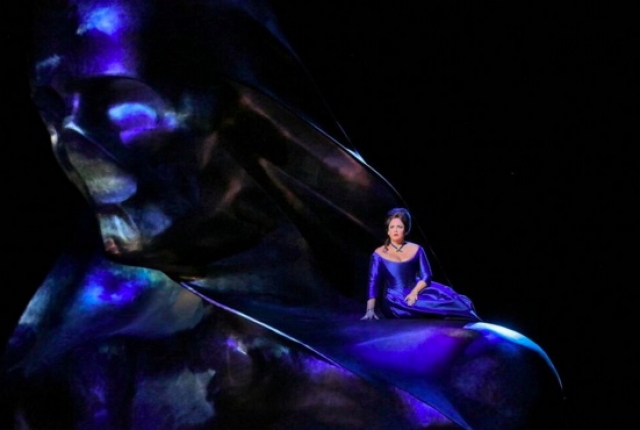 The production of Mozart’s Don Giovanni now running at the Santa Fe Opera is a perfect occasion for a celebration of the opera company’s sixtieth anniversary. Seating over 2200, it is a grand house in part because it is located on a mountain top with a view of the Jemez Mountains. Performances begin at 8pm as the sun sets and the backstage real sky is streaked orange, red and burnt sienna.

In creating the scene for Don Giovanni, set designer Riccardo Hernandez has taken full advantage of the open stage. Most striking is both the simplicity of the set, with arched columns stage right and left and a sphinx-like death mask rising from the rear of the stage. Death and darkness hover as the real scene behind goes dark. Scenes on stage flow one to the other seamlessly. We have no set breaks. This immeasurably increases the delight of the performance.

What is also striking is the direction by Ron Daniels. Of course, the talent, a group of marvelous voices, can also act. Keri Alkema strikes a precarious balance between passion and jealousy with an ear and eye for just the right tone. She captures this is facial expressions, body movement and in the textures of her voice. When she tells herself to get to a nunnery at the conclusion of the opera, we want to cry out, “Please don’t.”

On the other hand, among the many visual pleasures playing before us, nuns with sweeping white coifs, including the wimple or guimpe of starched see-through organdy. Alkema has been dressed by Emily Rebholz to match her mood, first appearing in an emerald green dress and full length forest green cape to declare envy. The white coif would perfectly indicate the foreswearing of sexual passion.

The set, costumes and visual projections subtly encourage our emotional involvement with this, perhaps Mozart’s crowning achievement. Blending comedy and tragedy, the arc of the opera, from the Don’s inexhaustible repertoire of seduction techniques to his final consummation in flames is done with a camp edge.  The orchestra’s performance, and the gorgeous arias often sweep us into love, disappointment and even fury, by exaggerating characters who are already a bit over the top.

Only Donna Anna, sung with a pure beauty by Leah Crocetto, plays it straight. On the other hand, after her initial seduction by the Don, where her father the Commendatore dies defending her virtue, her  nipples poke out directly at us. The Don takes a bath along the way, and we get an almost full frontal on Daniel Okulitch.

Don Ottavio is a thankless role which Edgaras Montvidas sings with a rich and sensual delivery. If his is the star voice among many wonderful voices, it is Kyle Ketelsen’s signature performance as Leporello that steals the show. Caught between the need for employment and disgust at this master’s behavior, Ketelsen’s moves with grace from an exaggerated interpretation of the Don’s demands, and contrition that he finds himself in his employ.

At the beginning of the production, a large sphinx rises onto the rear stage and remains there throughout.   Riccardo Hernandez has said that he created this central, but recessed image to indicate the darkness of this comic tale. The dead commendatore, whose death mask the form may suggest, also hovers over the story. It has a whiff of the Lion of Venice, a symbol of a city, as it is a symbol of excess and death here. Whatever is means, it works to root the often antic goings on in Seville. This opera was a triumph in Santa Fe.