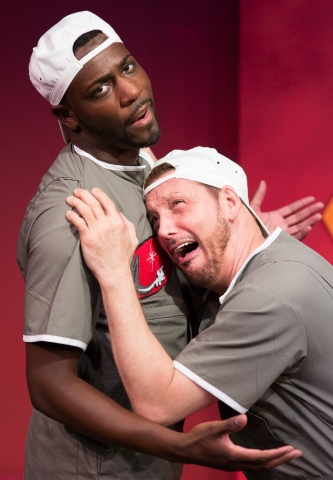 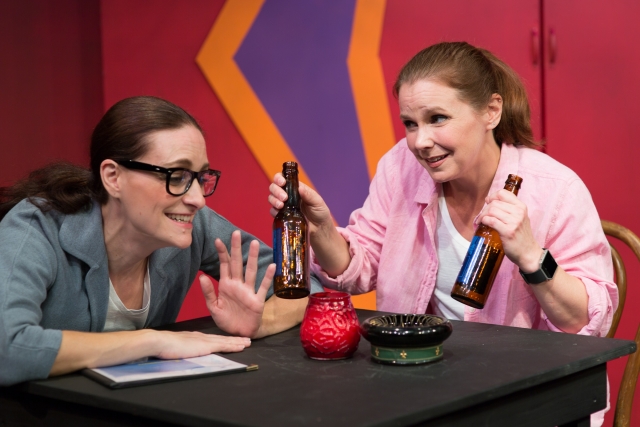 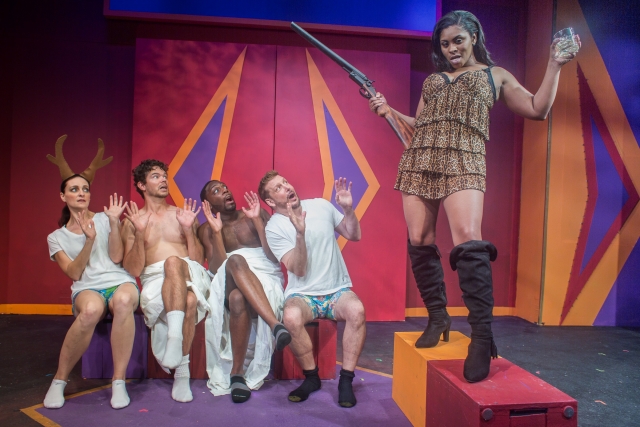 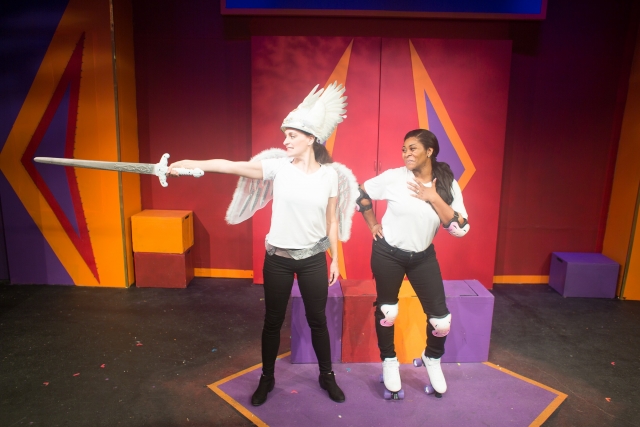 “I will obliterate those who oppress and repress people they do not understand,” the ambitious, young, wide-eyed, if a bit naïve man proclaims confidently. “And I will seek justice for those who’ve been marginalized by society.”

If you think such a person sounds like someone sorely needed in the world, rest assured you’re not alone.

The production includes an upbeat, game-show-like atmosphere that allows audience members to choose the order in which the actors perform the plays. They perform them on a bright, simple set designed by Ardean Landhuis, who also designed the mood-appropriate lighting.

The two companies make a perfect match to organize a festival about gay-themed, short plays; Island City Stage, the winner of numerous awards, aims to “create quality theatrical experiences that focus on the LGBTQ community, but have a heart and soul that is truly universal.” It is based in Wilton Manors, the “second gayest city in America,” according to the city’s website, www.wiltonmanors.com. City Theatre, meanwhile, (www.citytheatre.com) is the “only theater company in the U.S. solely dedicated to developing and producing 10-minute plays year-round for all ages.”

Shorts Gone Wild 5 contains its share of such fare, like the play with the aforementioned quote. But this version of the popular untamed Shorts festival also possesses some meatier, more serious works.

To be sure, the play alluded to is a comedy meant mostly for laughs. It’s titled The Adventures of Gay Man--Birth of a Hero. The play, by Kris Thompson, contains stereotypes that might make your eyes roll. But bear with Thompson just a bit before you outright dismiss the play as unoriginal.

Randy (an eager, fresh-faced Jordon Armstrong), walks into a talent agency to audition to become a real-life superhero. Soon he reveals he’s gay. That instantly piques the interest of a retired female superhero, named B.A. (a charismatic, open-minded Rita Joe), who owns the agency.

“I’m sure we’ll have an assignment for you in no time,” she says enthusiastically. “Just think…Shopping emergencies! Floral arrangements gone awry! Bad haircuts. Theatre recommendations!”

That angers the wannabe-superhero, who wishes to rid the world of “dangerous stereotypes that permeate our society.”

The play’s premise might seem somewhat naïve and as they say, “real heroes don’t wear capes.” But, in addition to making us chuckle, the play empowers us. How can’t it when it brings to mind someone with magical powers who can possibly obliterate fears of an impending apocalypse?

In Carly’s Last Call, the title character must feel like she’s drowning into a black hole with no rescue boat in sight. She’s flooding her body with alcohol during a trying time in her life and nobody, not even her love interest, Derek (a comforting Lawrence Buzzeo), can keep her afloat. The play, by the talented, prolific Miami-based playwright Michael McKeever, takes place in a gay bar in the present. Carly (an affecting Rita Joe), is waiting with Derek for someone. McKeever never makes it clear whom that person is.

But the crux of the play is that Carly must learn to live with the situation in which she finds herself – the loss of a loved one. Trying to escape the pain by downing alcohol in large quantities isn’t the answer, McKeever is telling us.

The setting of the gay bar seems secondary, even inconsequential, to the play’s main message, meant for any mortal.

Being gay is much more central to Give Me Space, a play by Spenser Davis, who has given his work’s title a double meaning. Barry is one of two gay men in space, along with his “boyfriend…ish. His something,” according to the playwright’s notes.

When you’re writing a play as short as the ones presented, there’s little room to develop much of a plot, characters or feed the audience with exposition. You need to get to the point quickly, which is what Davis accomplishes in this less-than-10-page play.

Barry (a taken aback Lawrence Buzzeo) and Kevin (a matter-of-fact Marquise Rogers) are the “first openly gay couple in space.” Kevin, for some reason, doesn’t feel like keeping their relationship, causing Barry emotional pain – and anger.

“Point is, ‘Kev,’ you are all I have. We’re the first openly gay couple in space and I’ll be damned if we’re gonna be the first gay breakup too…What is America gonna think when this story breaks?”

The play is funny but also relevant during a time when gay people have gained great strides, including the right to marry. Putting the first gay couple in space would seem such an accomplishment. So the stakes are high.

The play’s title, “Give Me Space,” contains a clever double meaning, with the couple seeking space (as in Outer Space), while Barry seeks space (as in separation) from his other half.

Rogers has a much wider emotional arc in what amounts to a long, thought-provoking and engrossing monologue titled Clarity, by Korde Tuttle.

Rogers switches seamlessly from casual, vivacious comedy (think a cross between Eddie Murphy and Chris Rock) to deep, heartfelt drama, portraying a vulnerable, emotion-filled character baring his soul naked. The setting is Savannah, Ga., where Cameron has just had “literally the best sex of my life.” He’s full of glee and modulating his voice wildly because he’s, well, in a wild, happy mood.

It’s refreshing, in the wake of the Charlottesville riots, to see a gay, black man openly, and without constraint, express pride in his identity, his culture and whom he loves.

But the play unexpectedly turns dark, serving as a stark, disturbing and unwelcome reminder of the ugliness that exists in racial relations today.

The characters might as well sing “Kumbaya” in So a Rabbi, a Priest and a Minister Walk into a Bar…

The play, also by McKeever, doesn’t carry much of a message and there’s little that’s original. The characters are stereotypical and some of the material just isn’t funny.

Rabbi: Okay, I’ll have a double shot of Jamison neat with a water back (this after he asks for a glass of Manischewitz wine).

Bartender: And for you?

Priest: A glass of red wine. And a wafer if you have.

Some of the material may be predictable, but the play as whole is anything but. In fact, a surprise is in store for the audience. The minister (an intense, hellfire and brimstone-style Baptist preacher with a southern accent nailed by Buzzeo), keeps repeating a phrase aimed at the bartender.  It seems like a well-meaning if curious statement. But in the end, it humorously shows that for all the minister’s righteous fervor and judgmental personality, he’s not so righteous himself.

One of the characters in Persona by Cassandra Rose shows a humility the minister lacks. But she possesses admirable courage in admitting, early on in her first date, that she’s unsure of her sexual preference. This sudden, out-of-the-blue admission from Emma (a nervous and honest Sabrina Gore) leads her and Joan (an understanding, reassuring Christina Groom) to look inwards – which might, in turn, force us to look more deeply in ourselves. We might ask: How well do we know ourselves? The play, set in a bar with a dance floor, includes a comfortable conversation between the two during a nice, quiet evening. It’s the type of relaxing respite we all long for after hard day’s work.

The least accessible play is Valkyrie in the Roller Derby by Seamus Sullivan. It involves Hillevi, a Valkyrie, “part of a group of divine warrior women who fly over battlefields and choose the worthiest of the slain warriors and carry them to Valhalla,” according to a description in the script. The other character is a roller derby player. Apparently the playwright is particularly interested in Valkyries, as well as early accounts of them. If you know little to nothing about them, it’s easy to get lost in the play – and not in a good way.

The play, which takes place in a roller derby, requires you to sit through it for a while before you can make out a message about race and preconceived notions. The good news: none of these plays last  more than roughly 10 minutes. Moreover, as whole, they amount to a fun, funny and a just a little thought-provoking afternoon or night at the theater.